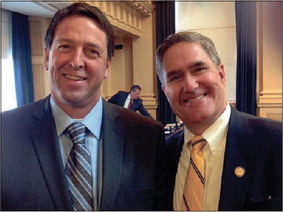 “I did indeed join with Speaker [Bill] Howell, [R-Falmouth] in requesting that Governor McAuliffe direct Secretary of Public Safety [ and Homeland Security] Brian Moran and the Virginia State Police to begin an investigation into Virginia’s Planned Parenthood chapters in the wake of allegations that Planned Parenthood abortion doctors conducted partial- birth abortions in order to harvest the body parts of children for money in violation of state and federal law,”

“The callous disregard of human life and apparent willingness to sell fetal body parts for profit expressed by Planned Parenthood’s Senior Director of Medical Services Dr. Deborah Nucatola between mouthfuls of salad and red wine in the Center for Medical Progress video is shocking and in my mind establishes probable cause that felonies may have been committed by Planned Parenthood ,” Minchew said. “While the directing of a criminal investigation against his political allies by Governor McAuliffe would not be easy, it would show some real political courage.”

Delegate Dave LaRock also called for an investigation. The issue hit close to home for him as he held his newborn grandson just a day after the first Planned Parenthood video appeared.  Delegate LaRock said,

“I certainly agree with the principle of it, and will certainly do whatever I can to help it move forward,” he said Friday. “[The video] was shocking to me, but on the other hand, I think it was actually believable given what I know of Planned Parenthood in general. Their practices reflect so little value [ on] human life they reduce these little bodies to a product for sale.”

John Whitbeck, chairman of RPV, joined the chorus of those demanding an investigation,

“ The very fact that those officials would openly discuss performing partial abortions and go on to talk about selling body parts and organs demands an investigation from our governor and the attorney general,” the party press release states. “I know this will be a hard call for the governor since he received nearly half a million dollars in campaign help from Planned Parenthood, but these allegations rise above partisan politics.”

It’s horrible to think that our Governor benefitted from this group that is selling body parts from aborted infants.  We should demand that all monies from Planned Parenthood to elected officials be returned.  No one should be benefitting from this terrible awful group and their practices.

McAuffille is in bed with Planned Parenthood. I’d bet dollars to doughnuts the request gets lost in the shuffle of papers.