You can read what we wrote about it back in February.

February? Yes, February. This inaccurate smear job is obviously and directly drawn from so-called opposition research clumsily generated by one of Comstock’s opponents for the 10th District GOP nomination. Last seen helping his boss lose another nomination contest, it is the elusive Rob Wasinger who was first to circulate these lies. (Nice work, Rob!)

Among other things, the literature outright lies about Comstock’s work at a D.C.-based law firm, says she earned tons of money working with disgraced lobbyist Jack Abramoff (when she in fact never worked with Abramoff at all), and attempts to paint as scandalous the idea that a Republican House of Delegates candidate would accept money from the sitting Republican Governor (because that Governor was later subjected to what seems to many observers a politically-motivated prosecution).

The genius behind these distortions back in February was revealed to be a sexist pig who clearly had problems with a strong female candidate. Not coincidentally, the architect of this latest smear has an even more shocking history. 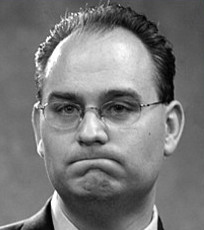 South Forward PAC’s day to day operations are handled by their Executive Director, a man named Jay Parmley. How did Parmley come to work for South Forward? Because he lost his previous job as Executive Director of the North Carolina Democrat Party for being an abusive perv in the workplace. In a letter revealed when the terms of Parmley’s settlement of sexual harassment charges against him were made public, a male underling at the North Carolina Democratic Party had this, among other things, to say about the man now trying to abuse Barbara Comstock:

Ortega says Parmley:
• Frequently gave him unwanted shoulder rubs despite verbal objections.
• Pointed to his crotch area and asked how his crotch looked in his pants.
• On July 28, detailed his past sexual activities.
• On July 29, showed Ortega a picture of a penis.
• On Sept. 6, caressed Ortega’s leg as they drove back from a Democratic convention kick-off in Charlotte.

The harassed staffer was later fired when he complained.

But that’s nothing compared to Parmley’s conduct outside of work. While serving as Executive Director of the Oklahoma Democrat Party, Parmley also taught a class at a local community college. It was there where, at the age of 32, he met a 20-year-old student who became his girlfriend. After a three year relationship, including cohabitation and a move together to Parmley’s new job for the Democrats in Mississippi, Parmley revealed to his girlfriend that he was HIV positive. Soon after she discovered that he had infected her, he then dumped her, leaving her then without any health insurance.

What is it about Barbara Comstock that brings out the worst in misogynist liberal Democrats? They just can’t stand the fact that there are strong, conservative women who step off the Democrat plantation. And with Barbara Comstock in particular, they fear what she will do to hold Democrats in Washington accountable when she has a seat in Congress.

As you may recall, Comstock was a key figure in investigating corruption in the Clinton administration as a Congressional staffer. With her own seat in the House, Democrats understand they will be under her watch for a long time to come.

That also helps explain why South Forward PAC is targeting Comstock, as it’s chairman—former DNC Chairman Don Fowler—was one of the targets of Comstock’s scrutiny back in the 1990s. Fowler was exposed as being integral to the Democrats’ scheme to raise millions of dollars from foreign nationals, much of it via convicted felon John Huang.

The last person Democrats want to see in Congress is Barbara Comstock. Remember that as their rhetoric gets more shrill, and John Foust and his allies start rolling out lie after lie about Comstock’s record.

Democrat PAC smearing Barbara Comstock is led by operative with history of being abusive was last modified: August 11th, 2014 by Chad Ochocinco

Brian W. Schoeneman is secretly happy about this!

No, he’s not. Do you think he wants Foust elected?

He does not want a conservative elected!