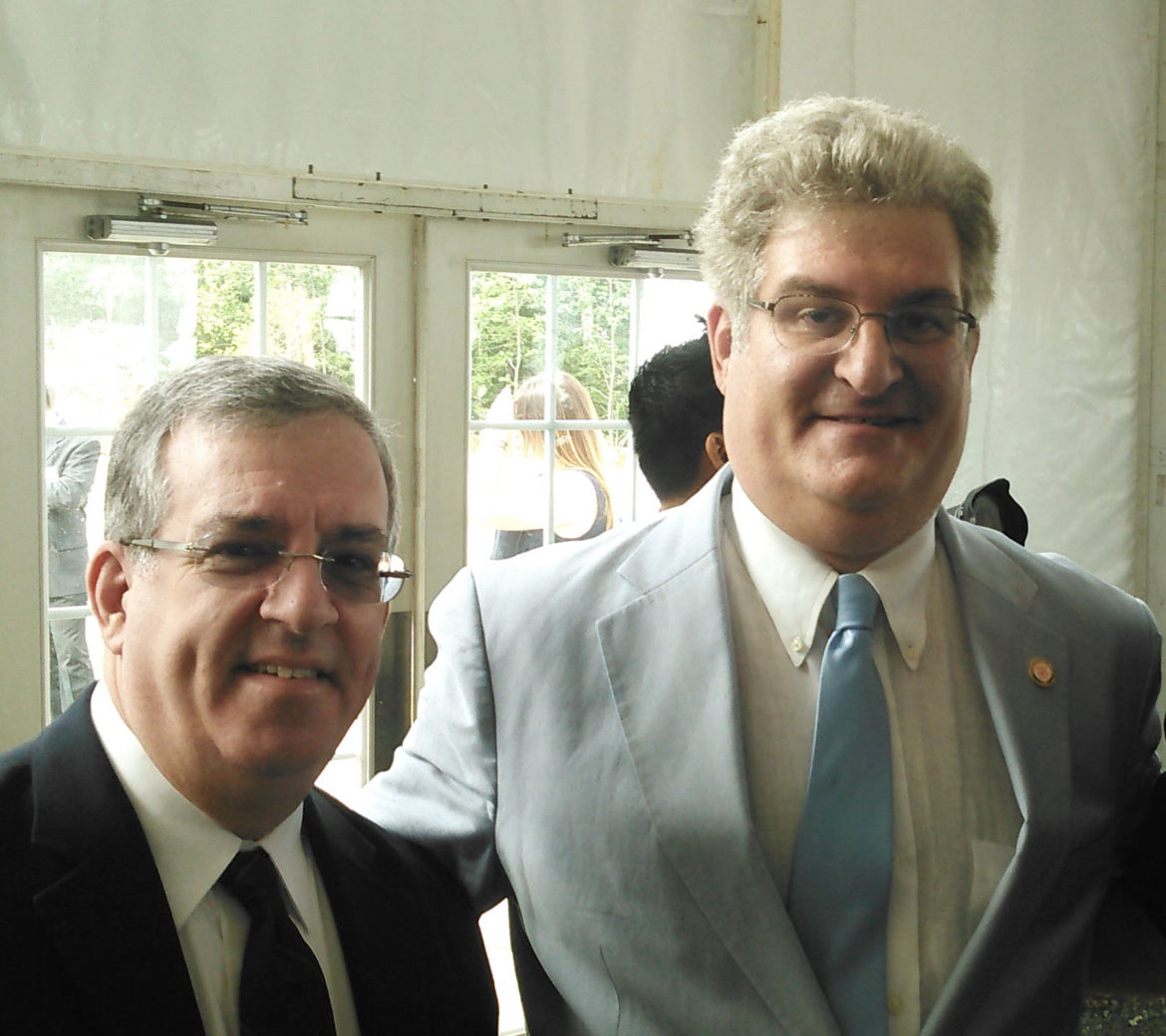 Even before Alan Dershowitz plus a number of pro-Trump attorneys expressed their shock over the FBI raid of Trump Attorney Michael Cohen’s residence, office and hotel room, this attorney, former Loudoun Supervisor Stevens Miller, posted this on Facebook.  I am presenting this verbatim with his permission.

As an attorney, I find this deeply troubling.

When the government moves against a person’s lawyer, they make it impossible for that person (and every other person) to have faith in the confidentiality of their communications with counsel. It also tends to signify a fear by the government that they are up against too much lawyer, and are using a trick to force a client who is on a winning path to start over with a new attorney, but with the constant threat that this one’s office will be raided too.

The right to counsel is constitutionally guaranteed. This sort of thing evidences a disregard for that right. Moreover, it can be really dumb. Suppose a critical piece of evidence is obtained by a review of Mr. Cohen’s files, but a court later rules it inadmissible because obtaining it violated someone’s constitutional rights? Absent a convincing and inevitable path that would have led (constitutionally) to the same evidence, a defendant would be effectively immunized against conviction for whatever that evidence proves.

Now, if one were a chess player, one might say that the discovery of damning, but inadmissible, evidence might preclude criminal conviction, but it would not preclude removal from office via impeachment. And, that same one might say that is worth a ruling of inadmissibility if it takes Donald Trump’s finger off of The Button. But I have my doubts that prosecutors play that much chess, and even more doubts that anyone would (or could) orchestrate this action for that purpose.

What we are left with is an extreme example of the government using the warrant process to overcome two fundamental constitutional rights: one, to the effective representation by counsel and, two, to the due process of law.

I will await more details before drawing a conclusion. It is possible that the probable cause needed to support this invasion did exist, was presented to a judge who saw it clearly, and that the warrant was issued constitutionally. For that to be the case, however, Mr. Cohen himself would most likely have to be charged with a crime. If that doesn’t happen (and, frankly, I don’t think it will), then my conclusion will be what it almost always is when a lawyer becomes the target in place of client: this stinks.

I mean, really, what am I supposed to say when a client asks me if I will keep their secrets? Usually, I say this: I am not allowed to disclose anything you tell me without your permission, unless one of these things happens:

1) You tell me you are planning a specific act of violence.

2) You give sworn testimony as I am representing you that you have previously told me would be false.

3) An order compelling me to disclose something is entered as a final judgment in a court of competent jurisdiction, prior to which I will make every effort to oppose such an order.

4) I need to disclose something in order to defend myself against a charge you bring against me of professional misconduct.

Guess now I’ll have to add this:

5) The cops break my door down and take my files with no warning of any kind.

Thus, my caveat. If Cohen is part of a criminal conspiracy with a client, the right to confidentiality can be breached. But remember: FBI would have to show a magistrate that they already had probable cause to believe this was true before any warrant could issue. If that turns out to be based on something solid, and Cohen is charged, this is kosher. If he isn’t charged or, somewhat more subtly, he is charged, but mostly on the basis of what they seized today, and the evidence supporting the claim of probable cause turns out to be something someone named “X” said in the warrant application, then this is pure overreach.

Reid comment and Update: The  Washington Post reported the government clarified in a court filing the true nature of the raid, saying it was focused on Cohen’s personal business dealings, not his client relationship with Trump.

However, the article does not indicate what documents were taken and how many of them could be related to the president.

I would venture to guess a number of attorneys, especially defense attorneys, (many of whom are Democrats), also are in shock and horror over what happened in New York to Michael Cohen.   But one brave Democratic one here has spoken out.

It’s important to remember this  — the president is not above the law but he’s not below the law, either.  In other words, justice must be blind, even when it comes to him.

Please keep in mind the FBI seized ALL of Cohen’s files and are reading through ALL of them, i.e. not just files related to the payments to Clifford and McDougal. This is an assault upon client confidentiality. Today, for some unknown reason, Judge Kimba Wood ordered Cohen to publicly name ALL of his clients. Why?

The court and the taint team are segregating the material gleaned. It’s how search warrants work.

You are pro-law-enforcement, yes? Or should we revamp the rules of evidence? If so, what general reforms do you suggest?

In other words, in your opinion the attorney client privilege puts all lawyers above the law?

If an attorney is breaking the law for whatever reason, how is law enforcement supposed to prosecute said attorney and not have stupid articles written to deceive the masses?

Nobody really knows what Rosenstein or Mueller has outside their office. This article is just another half baked,
National Enquirer type, hope based endeavor. The hope being that Trump is not guilty of anything.

Why don’t you write an article speculating just what dirt Sessions has on Trump that keeps Sessions from being fired?

I wonder if you could look at this objectively if it wasn’t Trump. Nah, “deceive the masses” shows it beyond you.

“I wonder if you could look at this objectively if it wasn’t Trump.”

I am looking at “this” objectively. It is you who are blinded. Again, nobody writing or commenting on the special investigator or last weeks raids knows what the Feds may have. Trying to “deceive the masses” with mere speculation is exactly what this 24/7 media blitz is doing.

Again, the Trump legal nightmare was been put into being by Trump’s own appointees with the blessing of Republicans. NOT THE DEMOCRATS.

These are undistorted facts.

Messrs. Stevens and Reid lay out objective concerns, The Fake Dossier usage should show you more concerns. This is a big deal no matter how much you hate Trump. How would you ever serve on a jury?

Nope, in my opinion a Trump campaign operative and a lawyer lay out those positions which best benefit their careers or political ideology. Until the special investigator is finished his work nothing is real nor fake, including any dossier.

And that is just it, you support attemps to “deceive the masses” and discredit rather than let Mueller finish what Trump appointee’s and the Republican majority congress feel necessary to clear Trumps name.

We guard the guards. We watch the watchmen. Are you seriously arguing against guards and watchmen?

For shame the modern GOP, distancing itself from law enforcement. Truly a sad reflection on a party misled by an unscrupulous leader.

Just a Virginian speaking for average Virginians about the evils of Republicans.

Keep re-reading, you’ll eventually get it.

I feel the same way about Democrats and say so. You are an advocate for the Republican Party and admittedly so.

It does none of us any good to watch government leaders abandon law enforcement. Because most associate Republicans and conservatives with support for law enforcement and the military, this is a particularly tragic betrayal. It is simply among the many reasons the average Virginian now rejects anyone running as a Republican.

I do not. I evaluate each candidate without regard for their claimed party affiliation. In a world awash in information we have little need to be told how to vote by a political organization, Republican or Democrat.

You discredit those who stand on walls guarding us, and for political advantage. The average Virginian deplores this.

Proof positive it is fake? Mindful proving negatives is rare, how do you write that it is fake? And you do realize a dossier is just that — a review of claims and gossip, right? A dossier carries no standard for proof, nor does it intend one.

And the FISA court was told everything they needed to know.

The FBI seized all of Cohen’s files including files of other clients who have nothing to do with the payments to Stormy Daniels and McDougal. And you don’t have a problem with this?

No, I don’t. Because the FBI had to have some very substancial evidence of criminal activity to convince any judge to issue a warrant for the seizure. Trump’s very own Republican appointees are leading this investigation. I’m sure that the real leader of the Republicans, Limbaugh, is very upset.

I expect to be raided at any moment because I once went to school in NYC.

It would be nice to be raided.
Do you think if I was the Federal Goverment would let the public know what Va reps knew of santuary employment and when?
Or would it make the Federal Government look foolish themselves for they have the data also. OSHA is part of VOSHA.
What about Tim Kaine, what does he know?
What should the previous Governor actually know?