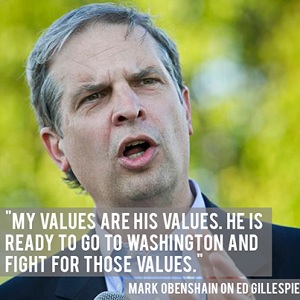 Yes, you read that correctly. DPVA would like you to believe that the popular Senator from Harrisonburg, who just lost a statewide race by a razor thin margin, is some sort of electoral boat-anchor for GOP Senate candidate Ed Gillespie.

It seems that at yesterday’s “Oysters with Obenshain” event, Sen. Mark Obenshain said of Gillespie, “His values are my values,” which is in essence the same thing Sen. Obenshain has been saying about Gillespie on the stump as a surrogate for months. But that’s no matter for the Democrats.

In a release earlier today, a DPVA “spokesperson” had this to say about Obenshain’s kind words:

Mark Obenshain himself emphatically announced that he and Ed Gillespie are one and the same,â€ said DPVA Spokesperson Ashley Bauman. â€œUnfortunately for Ed, Virginians rejected this extreme view…These views are out of step with mainstream Virginians. Ed Gillespieâ€™s hollow claims about attracting new voters to the GOP will fall on deaf ears with policies like these.â€

Out of step? Deaf ears? Memo to Ashley: the guy lost by 800 votes, in an environment where he was catching a lot of the heat aimed at his ticket mates. I’d say he did pretty well, and the results show that half of state liked him over your guy. Calling half the electorate “out of step with mainstream Virginians” is not only absurd, but attacking the people whose votes you actually need is pretty stupid.

Is this the type of intellectually meaningless attack we can expect once we have a nominee? If so, I think we’re in pretty good shape. The fact that DPVA felt the need to run with this weak of an attack suggests they, too, know their candidate is in trouble. This is going to be fun!

Democratic Party Attacks Gillespie as an Obenshain Clone was last modified: May 1st, 2014 by Chad Ochocinco

Are you willing to back Warner instead of Ed because he is no Obenshain? Silly at best! I want to see Warner for Senate bumper stickers and then laugh because he was beaten by Ed. he posted on the Loudoun County republican site where to get the stickers, poppycock. BTW Rocinante is a great name.

Ed Gillespie only hopes he could have the respect and political clout among Virginia’s grassroots Conservatives that Obenshain enjoys. He’s riding those coattails hard. But its hard shaking the inside DC a consultant label…”Ed Gillespie you’re no Mark Obenshain!”

If Mark Obenshain says Ed Gillespie is Ok, I stand with Mark. (After the convention if he gets the nomination.)