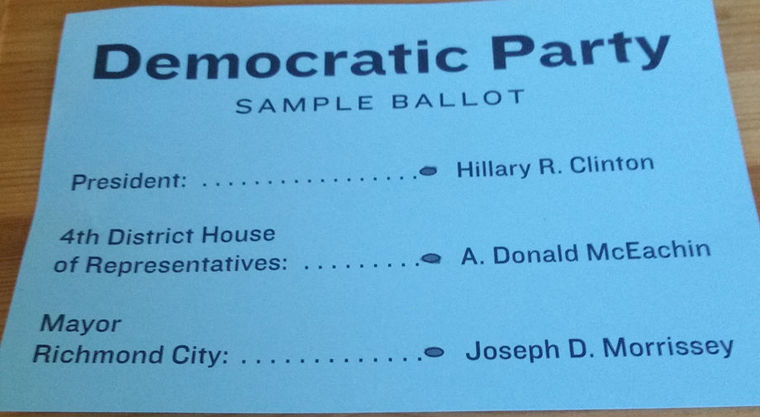 “Morrissey does not have the endorsement of the Democratic Party of Virginia or the Richmond City Democratic Committee, and we are requesting that he cease these activities immediately.”

“Ideally we would send out another 35,000 mailings with an apology and a correction, but at this point in the election, that’s just not going to happen — there’s not enough time,” she said. “I’m sure we’ll put it on social media. We’ll take every opportunity we can to apologize for the error.”

Joe Morrissey’s campaign manager had an explanation for the sample ballot. From the Richmond Times Dispatch:

“It (the sample ballot) was designed and sent to the printer saying the ‘Progressive Democratic Party,’ ” said Debbie Repp. “It was a situation where the printer, for artistic and speed issues, opted himself to take the word progressive off.”

As if anyone would believe that!

The Richmond Democratic Party strongly endorsed Secretary of the Commonwealth Levar Stoney for Mayor of Richmond. Stoney’s campaign and the local party are sending a ‘cease-and-desist’ letter to Morrissey and they intend to file a complaint with the State Board of Elections.