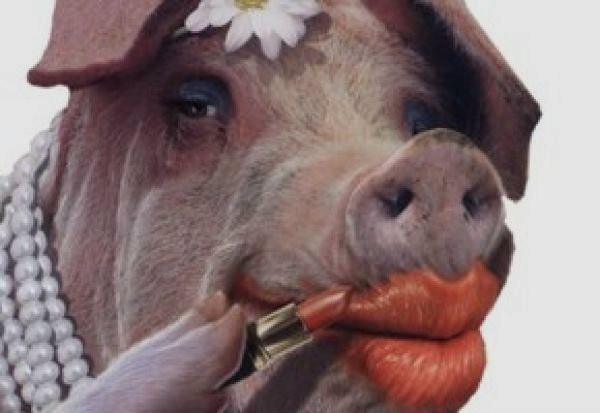 Simply renaming reality does not change reality one wit!

Putting ‘lipstick on a pig’ does not change the pig — it is still a pig.

Putting the cosmetic “social democratic lipstick” euphemism on ‘socialism’ does not change it — it’s still socialism!

Putting cosmetics over a pimple may temporarily hide the pimple from sight —but it will not make the pimple go away. Band-Aids hide open wound ugliness.

Euphemisms are used to sell fanciful ideas to the unwitting.

They are also examples of cunning rhetoric to salve the conscience of those perpetuating social and political ‘transformation’ (in reality, national suicide).

“Political Correctness (PC”) is ‘fascism’ pretending to be ‘manners’” (according to George Carlin). Political correctness is an ideology; it is language control; and language control is actually attempting thought control. ‘PC’ is an example of the cunning way in which social and political transformation manipulators operate (e.g., the ‘New World Order’).

It is censorship in a soft format; It is “intolerance” disguised as “tolerance” (e.g., “hate speech”).

The band-aids used in the myriad twisted contortions of PC insisting that language be sanitized of anything “offensive” has entered the theater of the totally absurd.

Moreover, PC is actually an ideology. Consider this: Authorities are cracking down on public expressions of the Christian faith all over the nation, and yet atheists in New York City were allowed to put up an extremely offensive billboard in Time Square this past holiday season that shows a picture of Jesus on the cross underneath a picture of Santa with the following tagline: “Keep the Merry! Dump the Myth!”

Kindly note that true freedom of speech is a genuine and legitimate human right (per legal documents of many countries), whereas the “right to not feel offended” is only imaginary and non-existent (though all-be-it championed by academia and the media).

Next will be Orwell’s (“1984”) political correctness of controlling our thoughts (his “Thought Police” prediction).

Beware: Socialism, Marxism, communism, fascism, Islamism, “Democratic Socialism”, et al, are all fundamentally and diametrically opposed to freedom and the ideas and tenants of democracy which are the basic foundations of our nation.

They undermine and oppose true liberty in all forms. The reality is that their end result is the destruction of freedom, our democratic republic, and our way of life.

These euphemisms unfortunately subtly anesthetize us to reality. Sometimes they mean to be of help. But usually they deceptively create a fog designed to fuzzily disguise and obscure actual truth.

Kindly note that, as in the hospital, post an operation, actual real pain returns when the patient wakes up in the recovery room.

Likewise, we find that when the fog of misleading dialogue lifts, we are left with the starkness of reality.

“Death with dignity” is still death. Does the “rhetorical lip stick” about ‘dignity’ really assuage the grief?

The German Nazi “rhetorical lipstick” of the “Final Solution,” when we strip away the euphemism, is in reality the “Holocaust.”  In Israel it is identified as the “Shoah” — which means “catastrophe”.

What a stark contrast reality is!

Jesus said long ago, “take heed lest anyone mislead you.”

So, a baby in its mother’s womb has the euphemism “product of conception” which Planned Parenthood, et al, puts on the covering cosmetic of this “rhetorical lipstick” to facilitate their selling of this “product” for profit.

Is this not insanity?

Scripture has beau coup exhortations about misleading rhetoric: e.g., Romans 3:13 “Their throat is a yawning grave; they use their tongues to deceive [to mislead and to deal treacherously]. The venom of asps is beneath their lips. [ESV]

Finally, observing our current culture, I consider the objective fact that ‘words’ are simply ‘words’; that we alone are in control of our own emotions; that we have the freedom to consciously choose to ignore, respond, or react to any ‘words’ in whatever fashion we desire (“feel” like).

But we do not have the freedom, or luxury, to blame someone else for our emotional state.

To do so is an abandonment of responsibility; perhaps, more importantly, it is an utter lack of emotional and spiritual maturity.

Such a state depicts a need to “Grow Up”!

So, beware of the rhetoric you take in. Strive to discern truth. And speak up for righteousness in the public square.