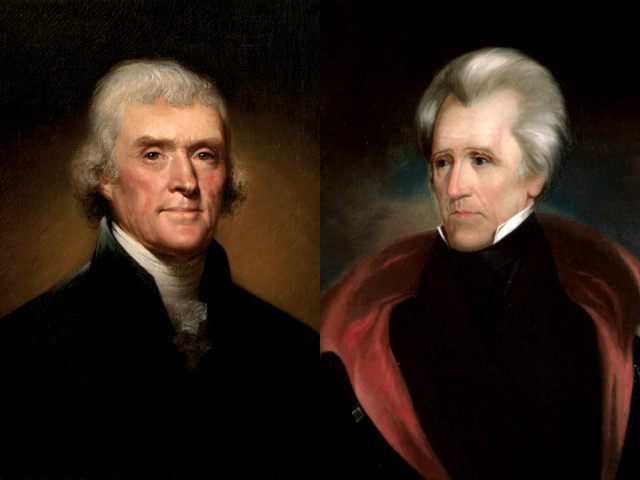 Democrats change the name on their annual fundraiser

Every year the Democrats in Virginia (and many other states)  have an annual fundraiser known as the Jefferson-Jackson Dinner.  But that’s no longer working for them because both Presidents are not worthy of such an honor.  Democrat President Thomas Jefferson was a founding father of our nation having written the Declaration of Independence.  He also wrote the Statute of Virginia for religious freedom, and he designed and built the University of Virginia.  No matter because Jefferson owned slaves and that’s enough for Democrats to remove him from our history and certainly from their big fundraiser.

Andrew Jackson, a Democrat and our 7th President, a statesman who served in both houses of Congress and fought for the common man.  He was also a  revered and respected Army General who lead troops in both the Revolutionary War and the War of 1812.  No matter. He owned slaves so he’s no good in the eyes of Democrats.

In order to avoid celebrating any Democrat who could later be found to have erred in the eyes of the Democrats, their new annual fundraiser will be called the “Blue Commonwealth Gala” and will take place on June 16th, just days after the June 12th primary.  The Chairman of the Democrat party of Virginia Susan Swecker said,

The Blue Commonwealth Gala will be a celebration of our party’s dedication to expanding opportunity for all Virginians. Building off our historic victories in the 2017 election, we are excited to rename our signature event as we work to make Virginia a stronger, fairer, and more prosperous Commonwealth.

Democrats change the name on their annual fundraiser was last modified: March 5th, 2018 by Jeanine Martin

Glad to see they adopted the political ‘Kiss of Death;’ “Gala,” that should give them the same success as it has for us.

I laughed at “Gala” also.

How long will it be before the Democrat Party drops the name ‘Democrat’?

It was a majority in the Democrat Party who stood against the 19th Amendment giving Women the right to vote. It was the Democrat Party, through Franklin Roosevelt, who interned hundreds of thousands of Japanese during WW2.

It is the Democrat Party that champions the wholesale extermination of 60 million souls since Roe vs Wade.

Actually, the Democrat Party ceased the being Democrat Party over the past few decades. They should now proudly consider themselves to be the global socialist party (GSP).

Great! Let’s call them the Global American Socialist Party, or GASP as their acronym.

I like the abbreviation but don’t think American is part of their plan.

Oh everything is all fun and games until we figure out that as the socialist Dems shed themselves of anyone having some semblance of Americanism, the only place the remnants can go to be relevant is your friendly neighborhood GOP. I for one will welcome them with open arms, but our more ‘conservative fellows’ will no doubt drive them into Camp RINO. Get ready for the self-immolation of the Democrat party to singe some aspects of ours.

My local Republican Party is in no way friendly or welcoming or willing to have that intellectual discussion.
My local Republican Party just attacks our local schools and the employees.
Yes you can be PRO-LIFE, PRO 2nd Amendment, require the Goverment do it’s job with the amount of employees it has (no growth) member of Timberlake Baptist Church,
Thomas Road Baptist Church , graduate from Liberty University and become a teacher in the local public school system in the hopes to better educate students help mold students in morality but because you took a job as a educator , your Democrat ????
As a business owner I never pass on the opportunity to enlist my new customer.
Friendly is far from it just look at the footage from a few years back at the Campbell County Republican Mass Meeting. Observe the behavior of the Republican Party puppeteers, one of the loudest is not even a resident of Campbell County but lives in the City of Lynchburg. They are more worried about who gets to go to the Convention.
Friendly, No. And this *toxic* self centered behavior bleeds into the Bedford County Republican Party.
The toxic behavior comment fits. In all of my years of Coaching young boys I have seen spoiled bratts who blame others on the team, cry fall down and have hissy fitts this is something I have observed and I see this kind of behavior within these parties.
If you want Corey to win the Primary he will need every vote to come out. Reach out to me and I will deliver him these votes that are thrown away by celebrity seeking Republicans after all I am *involved* in community not a political party.
When elections are done and if a Republican looses they always say we’ll if could get 1 or 2 % of a demographic we could win. I don’t think they want that percentage to be educated or debate.
Times a wastin, burnin daylight.

I’ve come to the conclusion that there are at least two Republican parties and that we wouldn’t have this kind of babytime politics if there wasn’t a desire for it. If everyone properly maintained their own unit, the whole party would function correctly.

You can look at the numbers in my area and any reasonable person can come to the conclusion that these folks are pulling Republican the local Republican Party does not want me or them.
In the other story Isaha calls for you blood , innovative thinking.
Well you can’t call for that and revert to attacking the local public school.
One would logically expect with all of this Republican Representation in the shadows of Liberty University, these would be the best public education in the Commonwealth.
(oh and no illegal immigration or MS-13
My apologies Ms.Martin)

Who will come get these fine (Free) Independent (Free) Conservative votes?
We have to see our Community grow properly.

“If everyone properly maintained their own unit, the whole party would function correctly.”

That is it. That is the answer to manifold republican problems. It really is that simple. We don’t have to solve the world’s problems, just ours.

It’s a great opportunity to poach more Democrats. Trump did it well. I read today in WAPO “It’s Time to Give Socialism a Try” and other coordinated articles about far left black progressives and others that want full-on socialism. I wonder if the new socialists want to murder hundreds of millions of people like they did last century?

But you make a great point. The opportunity to gain voters is there, if only we republicans could capitalize on an opportunity (not likely).

Why try to be a party of leadership when we can just be all swampy and virtue signal on a smaller scale? If we don’t listen, the electorate will call for a pox on both our houses.

Now you are talking. GASP is fully present in Western Europe where the citizens of the nations have been sold down the river and actual invasion is sponsored by the GASP members of the EU.