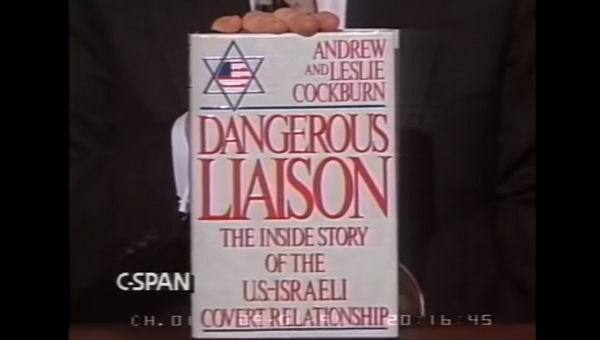 Democrats choose noxious anti-semite in the the 5th district

Yesterday in Virginia’s 5th Congressional district Democrats chose Leslie Cockburn to run against Rep. Tom Garrett.   Cockburn has a long history of anti-Semitism.  She and her husband are extreme anti-semites, blaming Israelis for nearly all ills in the United States and elsewhere, in their book entitled “Dangerous Liaison: The Inside Story of the U.S.-Israeli Covert Relationship”. From the NY Times:

…their book, supposedly a history of the secret ties between Israel and the United States, is largely dedicated to Israel-bashing for its own sake. Its first message is that, win or lose, smart or dumb, right or wrong, suave or boorish, Israelis are a menace. The second is that the Israeli-American connection is somewhere behind just about everything that ails us. (emphasis mine)

This book is no less than a history of the world since 1948, with the United States of America cast as the chief evildoer, and Israel as the evil genie. As the Cockburns see it, Israel, playing Iago to America’s Othello, has brought out the worst in this stupid, great power. Israel’s leaders, unprincipled, cynical addicts to military force and dirty tricks, manipulate America through American Jews—“women with blue hair and pseudo-athletic men.” These Jews have so corrupted America’s politics with their money that U.S. Presidents, too, have been led to betray our national interests by joining in massive coverups of Israeli misdeeds, including the illegal transfer of U.S. military technology on a scale “much bigger than Pollard.”

How do these inside dopesters account for so much evil committed by one tiny country? Mostly by fabricating quotations, twisting logic, and imputing guilt for nonexistent enormities.

Why, in general, do Israel and the United States collude? Because, say the Cockburns, the military-industrial complexes of both countries need war, in order to maintain their privileged positions in society. (emphasis mine)

In response to the Democrats’ choice in the 5th district Holocaust survivor and co-founder of the Virginia Holocaust Museum in Richmond, Jay Ipson said:

“I don’t know to which hate group she was trying to cater with her book, but her [Cockburn’s] claims are wildly inaccurate.”

“Cockburn and the Democrats want to take away Israel’s ability to defend itself,”

Indeed. Democrats are not supporters of Israel as Cockburn has made very apparent.

Recently the Democrat party chairman in the Greene County, Elizabeth Alcorn, resigned citing harassment by Leslie Cockburn and her staff.  More on that story here.

Democrats choose noxious anti-semite in the the 5th district was last modified: May 6th, 2018 by Jeanine Martin

Tom Garrett should play this up. Although it is not a local issue for the district, it is another indication of just how far left and hating the Democratic party has become. It could also get some national media attention. Fox News.

The same Israel that stole nuclear secrets, sold billions worth of advanced weapons to the Chinese (that we paid for), massacred the crew of the USS Liberty, won’t extradite its criminals to face trial here, and is an all around drain on our economy as it always has its hands out for more welfare? Which it always gets, as surely as clockwork?

You are talking about a event that occurred during the six day war in 1967. It was determined by the US Government after inquiries that Israel mistook the identity of the ship. The Israeli government compensated both the victims and those wounded in the attack.
The Israeli Government intelligence gathering in the Middle East is of vital importance to the US. It was Israel that warned the US in the late eighties about a Saddam Hussein and the use of chemical weapons in his own people.

You are coming across in your comments as anti Semitic! The same anti Semitic comments heard by Louis Farrakhan and White Supremiscists referring tomIsraeomalays asking fr handouts.

“Everyone who doesn’t want to put Israel ahead of America is Hitler” the post. And Israel doesn’t always ask for handouts; I wouldn’t care about that. I care that they ALWAYS GET them. “No money” to prevent American kids from sucking down lead tainted water in Flint, but, hey, Israel “needs” another few billion and by golly the money is there.

Your account of the USS Liberty massacre doesn’t match the recounting of the survivors at all, who saw their comrades strafed at close range. If it wasn’t for a passing Soviet ship the world would have never even heard of the incident so keen was the US to sweep it under the rug.

Harold is right on the Liberty.

There is an accepted agreed upon account with some of the necessary reparations and then there is what actually happened.

War always has casualties, however the official after spin.

Thank you for remembering to the USS Liberty. Global diplomacy and politics is always a lesser of evils game. Best to assume realistically that the world hates us and wants our stuff.

Bring out the weather machine.

Yes the weather.
This past November I stood in the cold rain with pleasure to help run the Libertarian Part of our Republicans out of office.
The Conservative Independent overcame the lies to Victory.
I even engaged Delegate Byron on the illegal employment here locally, she left. She should get in step with her Community for next year she is on the ballot again.
I love the cold, I’ll always take a 20 degree day over an 80 degree day at work, you can work yourself warm.

If Corey Stewart comes here before 6/12 the ousted Conservatives are his.
Meet with the Independents this is a strong voter base for primary.

I look forward to casting for Garrett and Stewart , *ONLY*.
I’m working it every day, at Church too.

To claim Dems are anti-Israel is to ignore the opinions of Jews themselves, who reliable repeated data show vote overwhelmingly — 70 percent — for Democrats. The claim would have us believe you know better than they do how they feel.

Yeah, and just a few years ago over 90% of Jews voted for Democrats. The times they are a changin’. Jews are smart and they are learning it’s not Democrats who support them and Israel.

Just a few years ago? Reliable numbers show it hasn’t happened in over half a century (54 years).

Unless you have better numbers — and I am both open-minded and eager to see those — Roosevelt and Johnson drew 90% share of the Jewish vote, but it has not happened since, hovering between 70 and 80 percent in more recent years.

Yes, we are agreed, they are smart and therefore their actions speak louder than any words about them.

As the democrat Party embraces Islam, they will have to embrace anti-semitism. What is happening in Western Europe is a prelude to what will happen in the USA. Between a Muslim refugee’s Koranic inspired hatred of Jews and ANTIFA which seem to think of Jews as fascists to be assaulted on every college campus, you have a democrat party dividing itself. The Republican Party welcomes the smart people to our ranks and we really don’t care who they are as long as they believe in a constitutional America and the rule of law.

By the way, the democrat party captured the Jewish vote thanks to Harry Truman.

You may be correct.
I believe that one of McAuliffe for Governor Campaign advisors is Jewish and a very kind and caring young person bit that is for the *one note wonder*
(myself) to know and others to disregard.