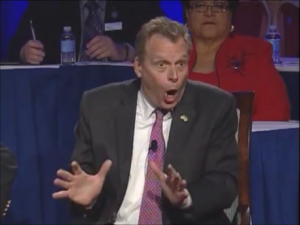 In apparent frustration over their inability to expand Medicaid under Obamacare, Virginia Democrats have ratcheted up their threatening rhetoric, reviving Gov. Terry McAuliffe’s promise to shut down Virginia government unless Republicans accede to irresponsible spending increases.

In a Facebook post earlier this afternoon, Del. Mark Cole (R-Spotsylvania) said that Democrat leader Del. David Toscano (D-Charlottesville) took Democrat rhetoric up a notch on how far they are willing to go to force expansion of Medicaid.

As you may recall, then-candidate Terry McAuliffe made similarly reckless threats during the campaign, before backing off of them amid the outcry that he would hold the state hostage to his pet project:

I will not sign a budget in Virginia unless it includes the Medicaid expansion,’ McAuliffe said this summer in an interview with AARP. He made a similar comment at a dinner with Loudoun County Democrats, the Loudoun Times reported in June.

The latest uptick in rhetoric comes as lawmakers consider competing versions of the biennial Virginia budget. The Senate version has provisions expanding Medicaid (though with some GOP-authored “sheep’s clothing” thrown on it), while the House version does not. As the Washington Post reports,

â€œDemocrats have decided to play a high-stakes game of chicken for the sake of expanding Obamacare in Virginia,â€ House Majority Leader M. Kirkland Cox (R-Colonial Heights) said in a speech on the House floor Monday. â€œThey have decided to hold hostage millions of dollars in funding for schools, teachers, police officers and hospitals in exchange for Obamacareâ€™s Medicaid expansion.â€

The Virginia General Assembly session is currently set to close on March 8. However, if the House and Senate remain at an impasse on the budget, the session could be extended. If no budget is in place by July 1, state government agencies will run out of money and be forced to shut down. House Republican leaders who have spoken to The Bull Elephant acknowledge that they may be in session all the way through June.

Unlike with the federal government shutdown games, though, here in Virginia it is the Democrats who won’t be able to escape the blame, particularly given the Governor’s repeated campaign pledges to drive the Commonwealth off a cliff rather than delay his pet project. Plus, let’s be real…Speaker Howell commands a lot more respect and authority among the press and the political class in Virginia than does Sen. Ted Cruz, et al, among the Washington chattering class, especially when Howell is viewed alongside the policy novice in the executive mansion.

As we’ve detailed previously, this game of chicken between Republicans and Democrats has its limits, though. At some point, Governor McAuliffe may simply decide he’s had enough dickering and delay on Medicaid expansion, at which time Democrats may simply pass the Republican version of the budget, leaving the executive branch to expand Medicaid after the session ends, without legislative interference. McAuliffe could conceivably act on the same authority claimed by Governor McDonnell last year, after the 2013 budget established a parallel (not exclusive) authority for Medicaid expansion via the Medicaid Innovation and Reform Commission (see Gov. McDonnell’s letter to HHS Secretary Kathleen Sebelius, where he says “â€œthe decision currently rests with me on whether or not to expand“).

Republican lawmakers have quietly acknowledged to The Bull Elephant that expansion in this fashion is a possibility, meaning that even if legislators are able to avoid a shutdown, they may yet find themselves in a constitutional showdown with the executive, one that has an uncertain outcome at best.

I’m furious over the I66 toll. My cost would be 117.00 a month and it’s only that low because I car pool with another teacher. We have not received any type of increase in the last years that would offset paying 340.00 a month to drive on a public road. I’m looking for a petition against this toll. Does anyone have one?

[…] and implement Medicaid expansion on his own.Â  In that case, it all ends up in court. (See the bottom half of this post for more […]

The absolutely most fiscally irresponsible thing Virginia could do is to not expand Medicaid. States save money by expanding Medicaid.

Doesn’t the VA budget in force now passed by the last administration contain “funds sufficient” for this?

Yes, “sum sufficient” funds have been appropriated already, meaning if the Governor acts he doesn’t need any additional help from the legislature.

So, the legislature one half D controlled the other half R not the past or present Gov. are responsible. Gov. Is Just exercising authority granted by funding.

Correct. This situation is a result of the deal struck to secure passage of Gov. McDonnell’s tax and transportation project. Democrats didn’t think McDonnell went far enough, but enough got on board for passage once they had assurances that the skids were greased for Medicaid expansion. The rest has been a bit of kabuki theater. Read my later post for some additional flavor: http://thebullelephant.com/breaking-virginia-house-vote-medicaid-expansion-thursday/

Just throwing sand in each other’s face in the political sandbox.

Can you actually quote what Toscano said or is this article completely void of the underlying facts that is the argument you are making?

They voted him in….they get what they deserve

[…] House GOP leadership has not been cowed by threats from Democrats to force a government shutdown over Medicaid expansion. In a highly visible manifestation of this resolve during Thursday’s […]

What did we do to deserve this dirtbag ? Virginia’s great statesman like Patrick Henry are turning over in their graves !

[…] and his allies, anyway.Â  They’re saber-rattling about government shutdownsÂ over expanding Medicaid and doing horrendous things to the budget here in Virginia.Â  Thank you […]

He fully expects to turn Virginia into California over the next 4 years. Can a Governor be fired????

I warn people in Virginia what was going to happen if they expand Medicaid taxes going up is next just about all democrats are damaged goods the only one’s I have about half way liked Is Dan Daniels, Virgie Goode

I am amazed (disappointed) by the number of ‘folks’ who blindly flock to the dollars being thrown like candy from the feds, to support whatever flavor of the month, pet project, the feds have coming down the pike. Do they realize that there is no such thing as ‘free’ money? Do they realize that we will have to shoulder a share of the financial burden to support these projects? Do they realize that this ‘seed money’ is temporary, and we will have to shoulder the entire cost in the coming years? Our perpetual weak point seems to be our inability to adequately convey this reality to all of those who can’t understand why anyone would turn down ‘free’ money from the feds.

And I do not trust the federal government to say “just kidding” a couple of years down the road and tell Virginia-you are on your own now.,And by then there would be those hundreds of thousands in the system. What then?

Then we (Virginia) are saddled with paying the entire cost of the program ourselves. That was my point.

Toscano cannot shut down the Government in VA. Half his constituency works for UVA as state employees. Watch the libtards SCREAM if that happens.

That would be fun to watch! Grab your popcorn…

McAuliffe: bringing Chicago-style politics and the sewer of DC to Richmond. Thank you so much.

McAuliffe is so in the control of the Clinton’s, their powerful friends, and the Obama Administration, he cannot see straight. He is nothing but a carpetbagger, pure and simple, trying to overturn longtime Virginia customs, businesses, and idea’s. He’ll ruin a state and its’ reputation just to get more of the Obama/Clinton socialization into Virginia.

Don’t wait for him to tell any truths, either, anymore than Obama and Killary have about Benghazi..McAuliffe is just another socialist/Marxist puppet for Washington.

Par for the course. Extortion from liberals.

Still as silly as they always were, believe it or NOT.

A shutdown worked for the democrats once so what makes you think they would not use it again?

Because the whole dynamic is different. Here, no one can argue the GOP is being reckless…it’s clear that’s for the Democrats who are trying to rush this through. Plus, Terry McAuliffe is the author of the shutdown threats, and he commands relatively little respect among the press (in contrast to Obama, or Clinton before him). Further, Speaker Howell plays this game much better than his counterparts in Washington, and better than his opponents in Richmond. Democrats can try, but this time they won’t be able to escape the blame.