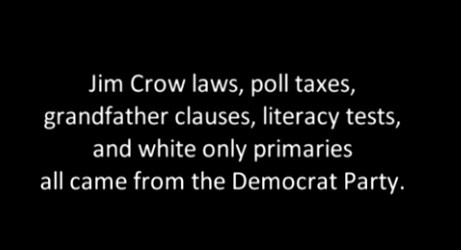 In the early 20th century progressive Democrats concocted a scheme to keep black Virginians from voting. Generally known as “Jim Crow” the Democrats in the Legislature and Governors mansion passed laws to disenfranchise black voters. The progressive Democrats claimed that black voters would make uninformed choices and would be more likely then white voters to vote for demagogues who would bribe them with unrealistic promises and taxpayer funded goodies.

Progressive Democrats believed that black voters, specifically the competition for the black vote, would corrupt the political system so they decided to disenfranchise them, and in exchange would adopt a paternalistic view that they could do a better job guarding the interest of black folks then they could.

All my life, I was born just a few years after the civil rights act and the voting rights act, liberals have been trying to rewrite Virginia history and claim that conservatives were the force behind this sad part of our state’s history. A sad chapter in an otherwise glorious book.

Well, enter progressive Democrat Governor Terry McAuliffe. In an effort to help the Hillary for President campaign McAuliffe has identified over 206,000 potential voters in the Old Dominion- Felons!

In an effort to mobilize them in time for November, McAuliffe has decreed that their rights are restored! So it is order, so it shall be. Well, not all their rights, they still can’t own a gun.

In the past convicted felons had to apply to get their rights, including voting rights, back. Now no need to even apply, just register to vote. Of course he has no constitutional right to decree a change in the current legal restoration process.

Now through his surrogates McAuliffe is claiming that banning felons from the voting booth is akin to Jim Crow. On its face this is absurd. A voting ban on felons, which in fact does not exist, would apply equally to white felons as well as black. In addition, the idea of banning convicted criminals from voting predates Jim Crow so the intent has nothing to do with race.

The people of Virginia do not support the automatic restoration of voting rights for felons. So in an effort to gin up support for his decree McAuliffe is claiming that the ban is a remanent of Jim Crow.

How low will McAuliffe stoop for votes?

The people of Virginia do not support the automatic restoration of voting rights for felons.

The present Virginia Constitution was ratified in 1971. Its principal draftsman was A.E Dick Howard who was given a great deal of latitude in drafting the document pursuant to the commission created by Governor Mills E. Godwin, Jr in 1968. Howard chose to retain the language regarding disenfranchising felons. I have seen no evidence that Howard objected to the provision at the time he was redrafting the Virginia Constitution. It is true Howard said recently this provision was a vestige of Jim Crow laws but I hereby accuse Howard of blatant hypocrisy. He said nothin about this matter in 1971 even though he gave literally hundreds of speeches supporting the adoption of the new Virginia constitution.

Hey! I’m sure these dems will be happy to legalize the ownership of firearms next for these felons, right?