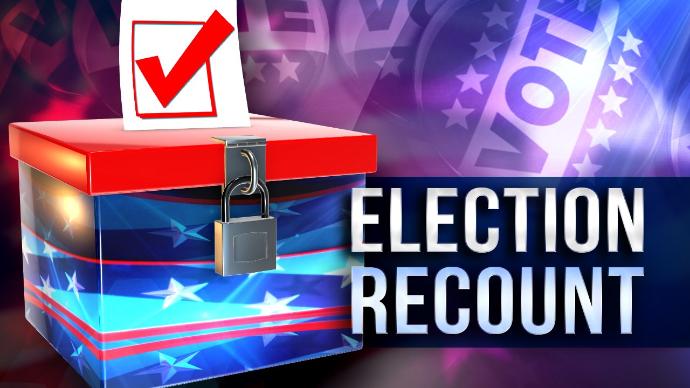 As expected Democrats have asked for recounts in two House of Delegate districts.

After candidates petition for a recount, a judge has seven days to hold a preliminary hearing. Recounts are overseen by a panel including the chief judge of the local circuit court and two judges appointed by the chief justice of the Virginia Supreme Court.

Under Virginia state law, taxpayers pay for the cost of recounts for races where the winning margin is smaller than half of a percentage point. Campaigns still bear the costs of legal fees.

Democrats have not yet filed for a recount in the 28th district although Republican Bob Thomas leads by only 82 votes.  We previously wrote about what may happen next in that district.

The current count for the new House of Delegates is 51-49.  (Prior to the election Republicans dominated the House by 66 to 34.)  If the Democrats win two seats in these recounts, they will gain control of the body for the first time since 2000.

Well, consider the House of Delegates now controlled by Dems. We all know what happens in a recount. Some random person finds a stack of uncounted ballots in some random location and EVERY SINGLE ballot is a vote for the democratic candidate…..

Well don’t forget, Republicans are just evil, stupid, misogynistic, racist, homophobes, so it doesn’t matter what you do to them. The Ends always justify the Means when you’re a warm hearted, environmentally conscious, virtuous Democrat.

Aren’t lots of the “environmentally conscious” in Virginia Republicans?

Homeschooling Mama: I’m curious: Is there an example of where this happened — EVERY SINGLE ballot recounted for the Democrat? I want to cite this point of yours but without evidence I cannot do so in good conscience. What is the source of this anecdotal claim?

Got it. Had thought you might’ve been serious. I do remember hanging chads or pieces of punch card dangling from the punch hole, a clear indication there was a punch to that hole but others arguing, no, it was not adequate indication of a vote, much like a misspelled write-in ballot.

Great! Republicans keep chanting about how much the TREASURE a VALID VOTE. …. Or are they just lying about that?

This all has its roots in the TEA Party movement 10 years ago, it’s taken that long to get the right people into Congress, the White House, etc, to get tax reform done. I am so glad it has finally arrived.

MANY AGREE. I AGREE. And I SELDOM find that Republicans are the ‘better’ choice, all things considered.

SO, please be clear: Republicans in favor of the tax bill ARE INDEED BIG GOVERNMENT FANS who want to SOCIALLY ENGINEER and SOCIALLY CONTROL all over the place – TRANSFERRING VAST SUMS OF TAXES – public monies – to PRIVATE CORPORATIONS? Because that is what the tax ill does.

Perhaps that is a good thing BUT YOU MUST ADMIT IT! YOU want BIG BIG BIG GOVERNMENT that ENGINEERS AND CONTROLS people.

Perhaps that is a good thing BUT YOU MUST ADMIT IT!

And, you MUST ALSO ADMIT that if the bill does not have automatic brakes to restrain the deficit you are BIG BIG BIG BIG SUPER BIG DEBT SPENDERS! SHAMELESS HUSSIES OF DEBT! WHORES OF DEFICIT SPENDING!

That might be a good thing since WHORES are among the oldest professions. BE WHORE-PROUD if you want the tax bill to have not automatic restraints on spending if revenues fall projections.

i live in the power of the holy spirit … don’t you know the old hymn: gotta move when the spirit says move, etc

Edward, I don’t care about the deficit anymore. Until about 2 years ago that was my big concern, that’s what got my votes, keeping the debt down.

But .. at some point, I just realized that a debt collapse is INEVITABLE. Democrats, Republicans, they are all so short sighted they don’t know, don’t care, and they’re BEGGING for a debt collapse.

So why not get it over with ?

They didn’t learn anything from 2008, it’s worse now than it was then. Some lessons have to be learned over and over again throughout history, and the lessons about spending money you don’t have is something this generation will have to learn the hard way.

So I’m left with a choice, drag it out as Democrats slowly bring us to debt collapse with social programs, or support something I support anyway which is low taxes and hasten the whole process to its inevitable conclusion.

Why should I puzzle over how to slow down Democrat’s destruction of the economy ? I’m not their daddy or mommy. If they want to wreck the place, fine. Best to just stop getting upset over it, protect yourself, and watch it all with a bag of popcorn and a smile.

The debt can’t BE fixed. It’s gone beyond that.

Whether or not you believe me I agree with very much of your analysis.

I am not ready – so quickly – to forsake reasonable democracy. The alternative IS a Putin-ish CORPORATE OLIGARCHY where ‘government’ is an arm of OLIGARCHS; and/or a China-ish CENTRALLY PLANNED ECONOMY within a POLICE STATE offending religious liberties, speech and thought liberties, etc.

I’m optimistic, but in a different way. I’m NOT optimistic that the debt can be fixed or that the inevitable debt collapse can be avoided, that’s baked in the cake now. The time to do something about that was 10 years ago. What I AM optimistic about is that the energies of the world move in cycles, and that debt collapse will eventually create an environment where sanity can become normal again. Of course there are decades between now and then, maybe a century, and I won’t live to see it, but maybe children yet unborn will enjoy that fruit.

There will always be dreamers who stand under the sun and find freedom in their own hearts.

You realize of course that the Republican collapse of 2008 had nothing to do with the debt, I’m sure…

If I hope that Democrats lose each recount by just one vote, does that mean I’m a bad person ?

Not at all. You can also hope for Trump to dress up like Santa to climb down chimneys …. to grab all the P he wants, or hope for four and twenty blackbirds baked in a pie, or hope for Republicans to pass a health care bill that fulfills Trump promise: GOLDEN HEALTH CARE FOR EVERY – EACH AND EVERY – AMERICAN that THEY CAN AFFORD AND WILL LOVE! BIGLY! BIG LEAGUE!

Can I hope that Republicans pass their tax plan disallowing the deduction of local and state taxes so that Democrats lose their source of funding and stop choking the life out of the very people they are supposed to serve ? Cause I’m kinda hoping for that too.

So, Republicans NEED to ADMIT that they are all about BIG INTRUSIVE GOVERNMENT, BIG CONTROLLING GOVERNMENT, – contrary to what THEY SAY – and they need to admit that, for whatever reasons, the TEND TO WANT TO CONTROL people of color! ADMIT THAT and move on.

And then, yes, you can HONESTLY admit that you want to SOCIAL ENGINEER and SOCIAL CONTROL other groups too, including as you say,

BUT admit the other first.

OBVIOUSLY Democrat USE GOVERNMENT for their own desires for SOCIAL ENGINEERING AND SOCIAL CONTROL! OBVIOUSLY. THING IS, THEY ADMIT IT.

We better hope that a good number of Republicans will take part in the recount. Ideally they would out number Democrats 4 to 1!!

Please explain this comment. It’s simple ballot counting. How does the party of the counter affect the vote outcome? So long as there is at least one observer from each party, how does that change the vote?