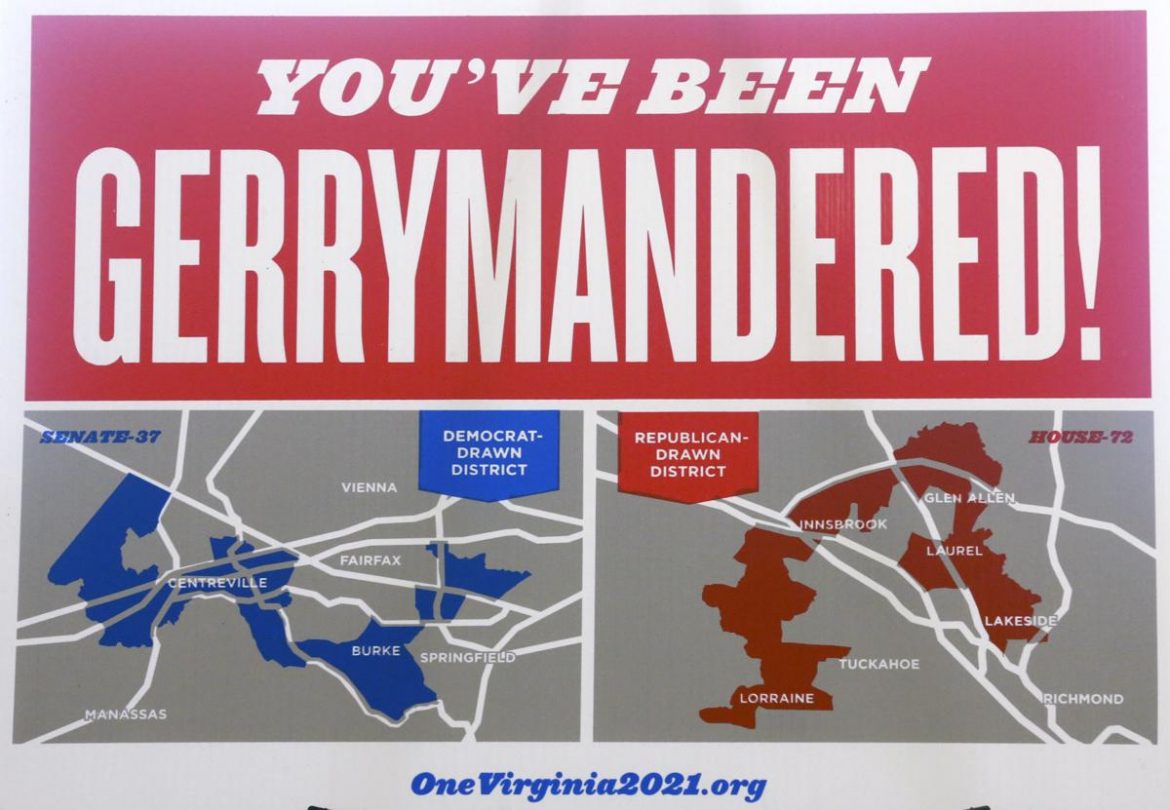 For some 18 years, I was a member of the Loudoun County Republican Committee, and it was rare for our unit to weigh in on bond referendums and a number of state constitutional amendments for our sample ballot

Well, here is one constitutional amendment that deserves the support of our units.

It’s to allow a bipartisan redistricting commission set the boundaries for new General Assembly and U.S. House districts, as per the population changes that we will see when the 2020 Census figures are out, instead of the politicians who control Richmond, who will likely gerrymander everything to their advantage.

However, at the Democratic Party of Virginia’s state convention the other day, the delegates voted to oppose the very constitutional amendment on the ballot this fall that their leadership in the General Assembly supported in the spring.

This article in the Virginia Mercury goes into the details,

“Democratic participants in the convention adopted the resolution in a package of policy positions approved by a 1469-233 vote.

“The text echoes criticisms Democratic opponents leveled against the measure earlier this year, saying it leaves Republican minorities and conservative judges on the Supreme Court of Virginia with too much power to draw maps that don’t reflect Virginia’s political preferences.

“If the commission is approved and the state ends up with Republican-friendly congressional and legislative maps, the resolution says, it could mean ” the loss of the Democratic the majority in the House of Delegates as early as 2021 and the Senate by 2023″ and potentially leave Democrats “unable to retake the majority in either body despite representing a substantial and growing majority of Virginia’s population.”

“Sens. Mamie Locke, D-Hampton, and Louise Lucas, D-Portsmouth, two senior Democrats who partnered with redistricting reform group OneVirginia2021 to get the proposal through the legislature, condemned their party’s vote but called it a “minor setback.”

“We are profoundly disappointed that some members of the DPVA would choose to push a resolution against an amendment that would end racial, partisan and prison gerrymandering in Virginia once and for all,” the senators said in a statement distributed by OneVirginia2021. “Democrats have been at the forefront of this fight for many years, this flies in the face of our longtime commitment to fairer electoral maps.”

“The Republican Party of Virginia concurred, in slightly stronger terms.

“The resolution that the DPVA adopted this weekend is a slap in the face to the thousands of Virginians that voted them into office under the guise of fair redistricting,” RPV Chairman Jack Wilson said in a statement.”

“Democratic critics of the proposal point out that it was their party that pushed truly independent, nonpartisan redistricting commissions year after year only to see them blocked by Republican majorities.

“The bipartisan measure that first passed in 2019, the final year of GOP General Assembly control, calls for a 16-member commission. Half of the members would be state legislators, with equal representation from the two major parties and the two chambers. The other eight seats would go to citizen members.

“Any two members from the same party and the same chamber could block maps they don’t like, a provision opponents feel opens the door to gamesmanship but supporters say incentivizes the two chambers and two parties to work together.

The DPV resolution “notes that the party will encourage local committees to highlight its opposition to the amendment on sample ballots distributed for Election Day.”

And that is where the problem lies.

Sad to say, but Democrat voters by and large vote the sample ballot, much like Republican voters.  Ticket-splitting has become a thing of the past.

And like it or not, Democrats have a voter advantage in this state.

So, if local units check the “no” circle on the sample ballot for this constitutional amendment, it’s likely that bipartisan redistricting will go down to defeat, and then the Dem politicians will be able to pay back the big donors like George Soros, Michael Bloomberg and Tom Steyer who “invested” millions of dollars in the 2019 election to swing redistricting control to the Democrats.  This included arming former U.S. Attorney General Eric Holder to go to court to change six House districts to give Democrat advantage – an example Democrats used to support the constitutional amendment.

When I heard about the amendment being passed, I suspected this would happen.  Their elected leaders would support bipartisan redistricting but then work behind the scenes with the party faithful to kill it – and I am sure the DNC and national groups who invested so much to turn the GA Democrat would want to see a “return on investment” – specifically, gerrymandered Democrat districts to screw Republican chances to get into office for years to come.

It just goes to show how cunning and calculating and hypocritical the Democrats are.

And the media do not see the Machiavellianism here.

But Republican units need to stand up and put an all-out effort to get this Constitutional amendment adopted and point out the hypocrisy of the Democrats.

[…] members first supported the constitutional amendment to create bipartisan redistricting, they sicked their state and local parties against it .  Democrats, I believe, would rather run in the same districts in 2021 as they did in 2019, […]