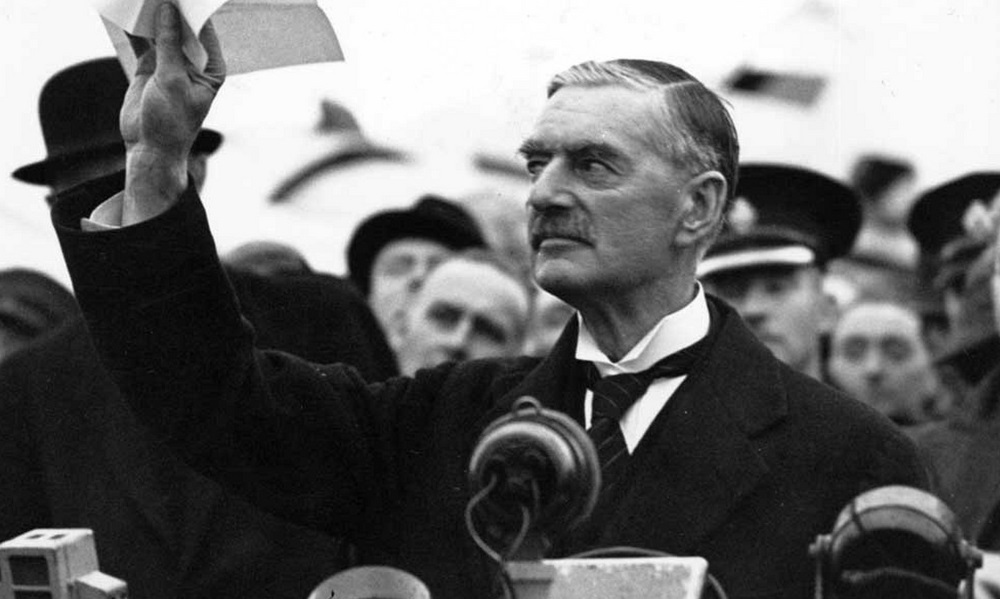 In a summit meeting in Munich in 1938, British and French leaders acquiesced to Adolf Hitler on his demands to re-absorb German-speaking parts of Czechoslovakia.  The leaders thought that by peacefully giving Hitler what he wanted they could thus avoid him taking it forcibly, saving countless lives.  British Prime Minister Neville Chamberlain returned to London to declare that this brilliant strategy had secured “peace in our time.”  The rest is, as they say, history.

Democrats have delivered the 21st Century’s equivalent of Chamberlain’s appeasement of Hitler, in the form of the Obama administration’s appeasement of the mullahs in Tehran via the agreed nuclear development framework.

Some (most?) Democrats supporting this seem blissfully unaware of the historical parallels.  One Democrat member of Congress (Rep. Patrick Murphy of Florida, the man who wants to take Marco Rubio’s seat in the Senate) even went so far as to brag that the deal had secured…wait for it…”peace in our time.”  From Murphy’s website:

This debate has proven to me that America and Israel are fortunate to have so many passionate, diverse voices who all want the same things: a nuclear-free Iran, a secure Israel, and peace in our time. In the interest of all three, I will be supporting this deal and voting against a Resolution of Disapproval in September.

The deal that the Obama administration signed (which can only be stopped by Congress if they have a veto-proof majority, instead of a simple Senate majority required to ratify a treaty), unleashes over $100 billion of Iranian assets that have been frozen, most since 1979.  This money goes right into the pockets of the mullahs, who are already—even without much of a functioning economy–the largest state sponsors of terrorism in the world.  It supposedly puts a halt to Iran’s weapons-grade uranium enrichment, but provides for no reliable mechanism to ensure that happens, and promises a lifting of the ban on certain sales of armaments to Iran.  And then, in 10 years, it goes away and leaves Iran without any restrictions on nuclear arms development whatsoever.

Obama and his allies, like Neville Chamberlain and his supporters before them, insist that the only alternative to this deal is war.  But the falseness of this choice is revealed by the fact that the deal is opposed by all of our allies in the region, not just the Israelis.  The majority-Sunni Saudi Arabia, Pakistan, UAE, Kuwait, and Egypt all oppose this appeasement of the Shia theocratic terror state because they know what will become of that $100 billion windfall: it will be used to build Iran’s military strength, and used to export destabilizing terror throughout the entire Middle East and beyond.  Instead of doing no worse than the status quo, Obama has set in motion an arms race that is exponentially more likely to result in catastrophic armed conflict than the current path.  Just like Hitler’s appetite was only whetted by the Munich Pact, the Iranian theocrats will undoubtedly view this deal as a capitulation by the West–more evidence of the moral bankruptcy of the Great Satan–and will be emboldened by it.

The Democrats now own this disaster.  Our own Senator Tim Kaine was among the distinct minority in Congress who support it, and who as of yesterday have pledged to block a veto override of any attempt to stop it.  Kaine has had this to say about his support for the agreement:

Kaine had previously said that he was still studying the details of the agreement and expressed concern for what might happen after various restrictions end in 10 or 15 years. But he has also argued that Republicans have no alternative besides a war with Iran.

“The nuclear program will only stop by diplomatic agreement or military action,” he said Tuesday in a speech from the Senate floor. “This deal takes a nuclear weapons program that was on the verge of success and disables it for many years.”

(Emphasis added).  This reveals a stunning—and highly dangerous—level of naivete.  We hope we’re wrong, but when Sen. Kaine runs for re-election in 2018, we believe he will have the blood of many innocents on his hands, spilled as a direct and predictable consequence of this utopianist fantasy masquerading as serious diplomacy.  And we will hold him to account.

[…] subject to the veto of 34 weak sisters in the Senate who are proud of the President’s “peace in our time” appeasement maneuver, including our own Democrat Senator Tim […]

The Iranian deal simply passes the problem off to the president’s children and to ours. It won’t take 10 years to see the total folly of this deal. Meanwhile, as Iran edges closer to a nuclear
capability and the Middle East continues to erupt in turmoil, former President Obama will be
dusting his Nobel Peace Prize perched on the mantel in his library.

One part of this that shocked me was an email I got from the lefty “Virginia Organizing” group urging their members to contact our Senators in support of this deal. VA Organizing has never to my knowledge talked about international policy in the past, so it seems unprecedented that they’d take this up. My takeaway is that their policy agenda isn’t driven by their local membership, which seems much more concerned with issues related strictly to Virginia state politics, but with an overarching Democrat agenda that spreads money around to these activist groups if they agree to astroturf various national priorities.

My understanding is that some Democrat heavy-hitters stand to reap some tremendous financial rewards if all this US currency sitting in frozen Iranian bank accounts suddenly gets released, and they’re spending money like nobody’s business to make it appear that people who not only don’t care about this but have no idea what this deal encompasses think this is the most important thing in their lives right now. Them buying a bunch of front groups to push this agenda is a good investment for them, but it depends on groups like “Virginia Organizing” selling themselves out to the highest bidder on policy issues rather than caring at all what their local membership actually needs or cares about.

It should be very instructive to see the Form 990 Virginia Organizing will file next year, but by then it’ll probably be too late to actually change the outcome of this decision. Too bad that so many good (albeit misguided) people are being crassly used like this.

Why is it that lefty groups always celebrate when we go soft on repressive dictatorships?

^THAT is an excellent question!