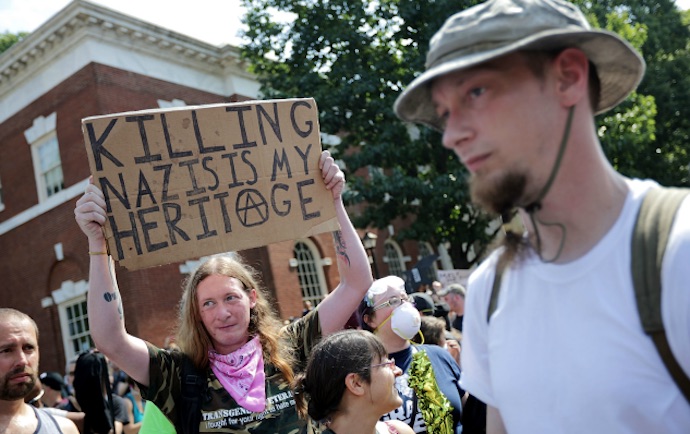 A political friend of mine told me a joke the other day. “What do ISIS and Virginia Democrats have in common? I shook my head and played along. “I don’t know” I responded. He gave me the punch line, “They both want to tear down century old statues they find offensive.”

I fear that we Virginians are facing many more Charlottesvilles. There will be several years of battles over Confederate statues, and it may not stop there. The politically correct Democrats may expand the Jihad. Perhaps Jefferson and Washington, while neither were part of the Confederacy, they did own slaves. Perhaps even the Father of our Constitution, James Madison was a slave holder. Come to think of it James Monroe said some pretty racist things….

Virginia Democrats have adopted a scorched earth strategy. They must figure only white males care about protecting the statues, and others will be too frightened to speak out. To Paraphrase Thomas Jefferson, Americans fear being called a racist more than hunger, thirst and cold. So while many if not most Virginians are opposed to the removal of the statues, they will probably just keep quiet.

After the Civil war, many Virginians came back and served our state. Robert E. Lee went to work as a teacher at Washington College. Fitzhugh Lee entered politics and became Governor in 1886. Also, Confederate veteran John W. Daniel became Governor and William Mahone became a Senator from Virginia. And Eppa Hunton, a veteran of Pickett’s Charge, also became a US Senator.

I do fear that over the next few years our Commonwealth will spend more time debating the statue controversy than debating what to do about education, (unless it is changing another school name or mascot) and transportation. My guess is while sitting on Rt.66 I will hear on the radio another school board’s decision to change a school’s name. This will become a regular occurrence.

I have an idea why don’t we just keep the statues up?

IF Republicans take this ‘bait’ – to make tortured, bizarre, and/or otherwise ineffective arguments to support ‘Jim Crow’ monuments* – they will miss what is really going on: radicals (who are a ‘Satanic’ sort of creature – authoritarian anarchists!) who want to utterly re-interpret the US Constitution, and state and local bodies of law and jurisprudence.

*All but a few of these ‘glorious Confederacy’ monuments are creations of ‘Jim Crows’ ideology, culture, and politics, not from the period near the war out of authentic sympathy for human loss. Why not find the few that are about memorializing the human suffering of the Civil War and speech clearly regarding saving them? But, the ‘Jim Crow’ monuments – reasonably! really, really! – must be moved out of public forums.

I stop trying working hard at shopritte and nowadays I am generating $75-$97 each and every hour. How? I am only working over the internet! My employment did not actually make me delighted hence I made the decision to take a chance on something new…after four years it wasn’t simple to drop out my day job however right now I couldn’t be more satisfied.???Read more here….

Make no mistake are here, the left will not stop until the Constitution is destroyed. After all, it was written by old dead white men some of whom owned slaves.

Another former Confederate General James Lawson Kemper who led Pickett’s charge at Gettysburg also became Governor of Virginia after the War from 1874-1877. Before the Civil War he like Lee and Jackson served in the Mexican American War but also served nearly ten years (from 1853-63) as a delegate in the General Assembly, including a term as Speaker as the war broke out. Although he was one of the leaders of the secessionist movement in the state before the war, after the war he founded the Virginia Conservative Party to stand up to radical Republican’s reconstructionist agenda. Ironically he was also involved in a statute controversy in 1875 in Capitol Square involving the dedication of a memorial to Stonewall Jackson. Despite the protest of fellow Confederate Jubal Early he allowed a black militia unit to participate in the event.