Last month several republican activists in Loudoun county pooled our resources to spend thousands of dollars buying 4′ by 8′ signs for the  E. W. Jackson campaign for Lt. Governor.  Our county is one of the geographically largest in the state with a large population of republicans.    It would have been difficult and costly for the campaign to cover our county with these large signs so we took it upon ourselves to gather the money and have the signs printed for Loudoun.   We are so proud of our candidate for Lt. Governor and wanted to remind our friends and neighbors to vote for him on November 5th.  A wonderful republican volunteer, a man well into his 70’s, drove his truck around the county installing the signs for us.

This is the result of our efforts: 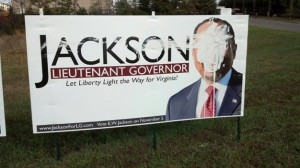