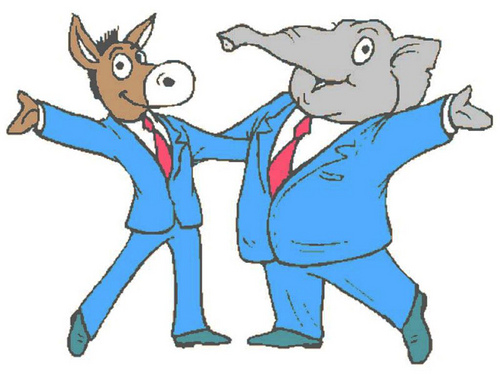 Democrats & Republicans: Better Get Together Before Their Parties Ruin America

Despite being completely unjustified, Democrats believe that Republicans hate homosexuals, women, and minorities. As Republicans, outside of simply taking offense to their accusations and insinuations, we’ve never really been able to combat their claims for two reasons. First, Republicans do not favor passing laws that help one demographic over another. We believe that we are all equal under the law and that laws ought to apply to all individual citizens equally. So we don’t promote a lot of legislation aimed at helping African Americans or Lesbians. We focus on legislation that will help businesses and workers, regardless of their color and sexual orientation. Secondly, and quite hypocritically, Republican legislators seem more focused on Corporate and Tax laws, picking winners and losers at the top of the economic stratosphere. To Democrats, this must reek of hypocrisy.

If we are unwilling to pick demographic winners and losers, then why are we willing to pick economic winners and losers? Is it because we’re comfortable with natural inequities so long as those inequities don’t effect the top 10 percent? If Republicans are prejudiced, they are prejudiced against anyone who fails to donate to them or smoke cigars with them at the country club. If Democrats hold this against Republicans, they are in good company since this is precisely what the majority of Republican voters hold against their own elected officials – hence the TEA Party and its aggressive (while disorganized) rebellion against the GOP Establishment. 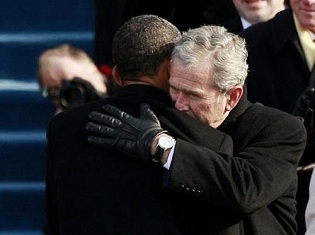 Interestingly, Democrats are beginning to realize that Republicans don’t have a monopoly on Corporatism and corruption. The Bernie Sanders campaign was the Left’s response to Corporatism and corruption within their own party. Democrat voters realized that they don’t even get to select their own nominees (unless their establishment’s Super Delegates bow to the “unwashed” Democrat masses).

It is frustrating that Democrats and Republicans have never been able to come together against Corporatism and corruption in a meaningful way. What is stopping us? Well, the primary wedge issue is abortion. Democrats seem to support abortion on demand, while Republicans want to limit it as much as humanly possible. Democrats believe that abortion is a civil right for women and that politicians shouldn’t pass laws forcing them to bear children. Meanwhile, Republican believe that abortion infringes upon the civil liberties of the child and reject the notion that politicians should be allowed to pass laws allowing the murder of babies. There is no middle ground.

So we know that Democrats will always be Democrats and Republicans will always be Republicans primarily because of their stance on abortion; but why can we not work together in a bipartisan fashion to take on Corporatism and corruption in government? Frankly, I think it’s because we don’t talk to one another anymore. Sean Hannity tells Republicans that all Democrats are evil bastards and are not to be trusted, while Rachel Maddow tells Democrats that Republicans are all racist, women-hating theocratic jerks looking to take America back to Jim Crow and a Male, white, landowning voter base. Maybe we should all stop listening to Sean Hannity and Rachel Maddow. Just a thought.

Another problem is that Corporatism and political corruption, corporate welfare and cleverly written tax loopholes aren’t what’s about to bankrupt America. The biggest threats to our economic future are entitlements. While Democrats with a background in economics seem to understand this, no Democrat politician would ever get away with attempting to address our nation’s unfunded liability. That would be like a Republican coming out for Abortion On-Demand. Ain’t going to happen.

I honestly don’t know how this country will survive if we can’t come together to save ourselves from entitlements and Corporatism in this country. Republicans and Democrats dislike each other. They don’t trust each other. They won’t work with or even speak with one another. We need some kind of massive cultural and political awakening in this country if we’re going to keep ourselves from destroying our economy (and taking the rest of the world’s economy down with us). It’ll only happen if we all work together.

I’m fifteen days late, but my New Years Resolution is to spend more time with Democrats talking about Corporatism, Entitlements, and Corruption; while recognizing that there will be a number of other issues over which we’ll never agree – accepting that as a truth that needn’t be overcome. I just refuse to believe that Democrats are any more comfortable with this country suffering more frequent depressions and recessions in the future. James Carville was right – it’s “The economy, stupid.”

I understand why we all feel like we’re fighting an impossible battle and why many of us feel like all the elected are bad. Sadly, our checks and balances system has lent itself to political parties gaining impenetrable control over Congress. The Speaker and Senate Majority Leader pick their leadership teams, put allies in positions of power and in positions that lend themselves to profitable donor lists. Democrat or Republican, it doesn’t matter. The same donors are there with the same dollar signs. President Obama wanted to save our health care system and the Democrats in Congress immediately sold out to the Pharmaceutical companies and Health Care lobby. “The People” never had a chance…never had a voice. This feeling of powerlessness led Americans to elect Donald Trump on behalf of his promise to drain the swamp.

If we want to end the cycle of sending radicals to the White House, then we better start taking our role as citizens seriously and begin putting some mutual pressure on Congress to clean up its act. We need to compromise with Democrats. Republicans need to let Democrats get us out of the Corporate Welfare business and Democrats need to let Republicans reform our Entitlement programs before these programs bankrupt the nation. Otherwise, all the hope and change won’t save us and no one man will ever Make America Great Again.