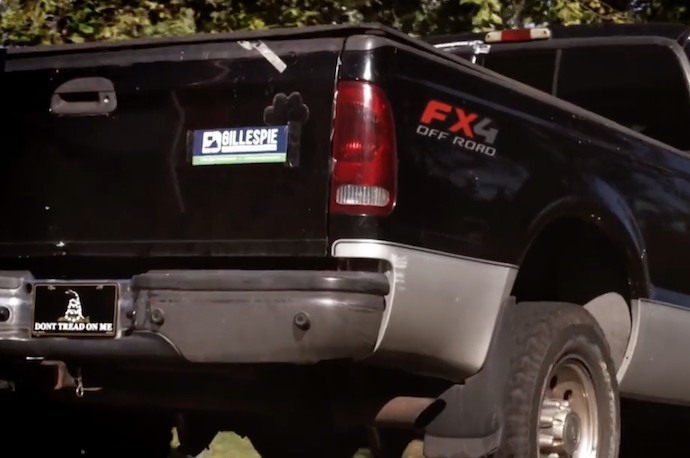 Democrats run from disgusting ad in support of Northam

The disgusting ad that was released yesterday showing a tea party supporter of Ed Gillespie trying to run down little minority kids, and then suggesting that Ed Gillespie is a neo-Nazi Klan supporter, has now been taken down by its creator.

We understand that Democrat candidates all up and down ballot have been getting hammered with questions about this video, and being urged to disavow it, all day. Republicans, on the other hand, are enraged by it. Attention to the video on national news outlets and talk radio has helped to provide the contrast necessary to motivate the conservative base.

So, it came as no surprise that the Latino Victory Project took down the English-language version of the video from YouTube and Twitter. They realized that showing Virginia voters what Democrats really think of them (i.e., that they’re nasty, hateful, bigoted rednecks who are prone to murdering children) was probably unwise, despite all the lefty protestations to the contrary. But they left the Spanish language version.

Folks, if your argument devolves to essentially calling your opponent a Nazi, then you’ve lost the argument unless the guy is a genuine Nazi. You start helping your opponent by beclowning yourself. Apparently they thought Spanish-speakers weren’t smart enough to see that.

About an hour later they finally thought better, and took down the Spanish language version as well.

But not before we were able to secure a copy.

It shows us the way the increasingly loony left Democrat Party actually thinks. They are trying to hide it for a reason….we need to spread it around for the same reason.

Can anyone determine what state inspection sticker is on the window? There is a second sticker, too, which I cannot figure out what it is.

Good catch. The truck just might be owned by a Democrat.

That’s got to be one of the worst ever political ads.

It further demonstrates how clueless the Democrats are. They have lost rural America by tremendous numbers…and then go on to further insult even more rural whites.

Have fun crying into your tequila on Tuesday.

All this ad is going to do is makes us feel Latinos hate us and turn us against them. After seeing this ad., I want to deport every last ILLEGAL alien before they can continue breeding more voters, and built the damn wall.

Actually, you have a serious point. Try getting DACA amnesty through the Congress.

The RTD states the ad was removed because of the terror attack in NYC and the use of a truck in that attack. What a terrible, inaccurate excuse. John Podesta’s emails last year revealed the democrats need supporters who are “unaware and compliant”. That, they have.

THS IS what is disgusting:

Trump has allowed terrorism in the US. HE CLAIMED TO HAVE GODLIKE WISDOM AND POWER to prevent. HE didn’t. He is neither a GOD not is he good at his job. In FACT, he is TERRIBLE at his job. If he were employed as my co-worker – with his terrible workplace behavior and poor work ethics (on the tv and tweeting rather than working! shirking duties, not even knowing his duties, and blaming others, etc) – he would BE FIRED.

Trump has put Americans in harms way – incompetently – and GOTTEN THEM KILLED! HE CLAIMED TO BE SMARTER THAN THE GENERALS! HE IS NOT! HE GETS GOOD AMERICANS KILLED! HE is himself a shameless COWARD – not serving at all! – and passing his SHAMELESS COWARDLY behavior on to his sons, big strapping men who, like their pathetic father, has not served! Daughter too: prissy mannequin who has not served!

Yep. Obama was certainly entirely different. Obama really had the godlike wisdom and power. Obama never got anyone killed by islamic terrorists – he said so himself. Obama never grabbed anything, he let Bill do it for him. (Sarc on).

Are you living in two times, sir? We currently have President Trump. Any behavior of any other President have NO BEARING AT ALL on the behavior of the current President. You must either defend Trump on his own behavior – or not. Stop talking like a stupid 5th grader who says: ‘Bobby pooped on the car seat so I can too’.

The past is prologue to the future. Those who do not learn from the past are destined to repeat it.

OH, so you mean

– TRUMP RAPE-GRABBING YOUR DAUGHTERS, YOUR WIVES, YOUR MOTHERS’ pussies? … that is prologue

– TRUMP LYING – and contrary to GOD’S explicit COMMANDMENT ‘do not bear false witness’ – and BEARING FALSE WITNESS about Obama’s birth …. that is prologue

– TRUMP GETTING HARD WORKING AMERICANS KILLED in AFRICA, after telling us that ‘he is smarter than the generals’ …. that is prologue

– TRUMP HIRING people charge with ‘CONSPIRACY AGAINST THE UNITED STATES’ … in some countries and at some times in US history a deat offense – like hanging, like firing squad, or like drawing and quartering (you know what than means, historically, don’t ya?)

Really? Thanks to the Obama-Schumer diversity visa program there are many dead and injured in NYC. This wasn’t Trump’s doing, it was yours and you should be proud of the accomplishment. We have a million people in the USA who were lottried in with no real vetting thanks to this program. Be proud. Own it.

OR is it thanks to your buddy Satanic Lord Putin’s secret manipulations – funding? – for ISIS? With the goal of undermining the US, and global democracies, since Putin is likely a 100-200 BILLIONAIRE with Satanic devices of world domination?

Actually when it comes to Presidents, any behavior of past office holders provides precedent for the behavior of present and future office holders. Thus we have continuance of executive orders, ignoring the constitutionality of legislative laws such as the War Powers Act and others, and political wrangling around the checks and balances presented by the separation of powers. Trump may not be God, but past presidents have inched The Office to nearly king like levels.

WHAT a load to stinking B-S that is. STINKY!

You are claiming that ‘because timmy sh*t on the toilet seat and didn’t clean it up … i can too, so there!’

So, if Obama sh*t on the seat Trump can too.

What a pathetic pig logic you use.

Are you a pathetic pig on the toilet? Hopefully all visitors to your home will wear personal protective equipment! and everyone following you in the public toilet take pictures of your dump and share it with you name online. Maybe Pig Trump will re-tweet!

Trump is as confident (or arrogant) as they come but I do not believe he has ever claimed to be Godlike in any way.

Deciding that Yahweh really didn’t mean the Commandment ‘do not bear false witness’ or intentionally violating the Commandment REPEATEDLY and KNOWINGLY is the very definition of acting like God! and acting as if the REAL GOD didn’t matter! Jeepers, your church, synagogue or mosque didn’t teach you very much did it?

Ummm… no. You can argue that Trump is a lying sinner for doubting Bronco Bama’s citizenship. But bearing false witness is not acting like God.

DUDE, your religious education has failed you. Many scriptures attest to ‘sin’ as ‘rebellion’ against God, and usurping God’s word.

Of course, if you worship the FATHER OF LIES, SATAN, and Satanic Lord Putin … that would explain a lot …

You might want to learn to say, “Speaker Toscano.”

For the umpteenth time I will provide the link to the FBI Crime Stats, which reveal that blacks, who are 13% of the population, committed in 2015 over 24% of hate crimes. That means that the Democrats’ MOST LOYAL, CORE GROUP, disproportionately commits hate crimes at a rate nearly double its percentage of the population. We should be running ads against them, not they against us. There are plenty of youtube videos showing black kids ganging up on lone white kids, punching and kicking and stomping them. Old white guys with Gadsden and rebel flags are not the hate crime problem. Young black men are. That is the truth. https://ucr.fbi.gov/hate-crime/2015/topic-pages/offenders_final

Oh darn, here is a copy of the original since the Democrats are too brave to keep sharing it.. mwuhuhuhuh. https://www.youtube.com/watch?v=wVckRJvuBQY&app=desktop

Their official explanation admits no fault.

We knew our ad would ruffle feathers. We held a mirror up to the Republican Party, and they don’t like what they see. We have decided to pull our ad at this time. Given recent events, we will be placing other powerful ads into rotation that highlight the reasons why we need to elect progressive leaders in Virginia.

It’s like an alternate reality. I read that and I’m like … they obviously have never met anyone in a truck with a set of Gadsden flag plates on it, or they couldn’t think what they think. That’s the whole problem with Democrats in general right now, what they believe about the people who don’t agree with them, the people out in the “red states” just isn’t accurate. Hell, I’d be a Democrat too if Republicans were the people they are portrayed to be. Fortunately I know a pile of Republicans and know they aren’t like what this commercial depicts.

Trouble is, Democrats don’t care, most of the smart ones know its all BS and keep pushing the narrative anyway.

You are part of the Latino Victory Fund, huh, Webster? Unusual Latino name but I’ll take your word for it.

No fault was admitted only because it might have damaged the democrats to admit fault, but it doesn’t matter. Removing the ad is an admission of guilt in everyone’s mind.

The ad didn’t hold a mirror up to the GOP. It revealed just how racist the Dems can be. The ad is overtly racist and everyone realized it. That’s the only reason the ad was pulled – in an attempt to save your butts.

Anyone who would think up, and produce such a racist ad, would never pull it unless the blowback backfired. It’s too late to try to claim a sense of decency. The funny thing is, you keep the ad up, you reveal your racism;. Pull it down and you admit it was racist. You created a wonderful Catch 22 for yourself, where you’re damned if you do and damned if you don’t.

Go ahead and post any like-minded ad. I hope you do. Post tons of them every day! Similar “powerful ads” will just bring more voters over to the GOP.

Children should be kept out of politics, period. But, the absolute garbage who make up both the Democrat and Republican Unions, knows no bounds. Both, being pure corruption, pure evil.

The left constantly uses children as pawns. The right doesn’t.

This ad is not only disgusting but quite untrue. If Northam was to run an ad based on anything remotely resembling the truth, it would be similar to what happened in NYC today. A white van driven by a violent muslim not only trying to run down jews and Christians but actually running down and killing them. Northam would never run such a politically correct ad because it doesn’t favor his leftist agenda regarding victims and grievances.

Are you so stupid as to not have figured out why it was taken down?

It was never taken down – or are you to stupid not to know that.

Because they realized it would cost Northam votes.

You don’t think it’s because they wanted to “do the right thing”, do you? They ran it to get votes and took it down to avoid losing votes. It’s as simple as that.