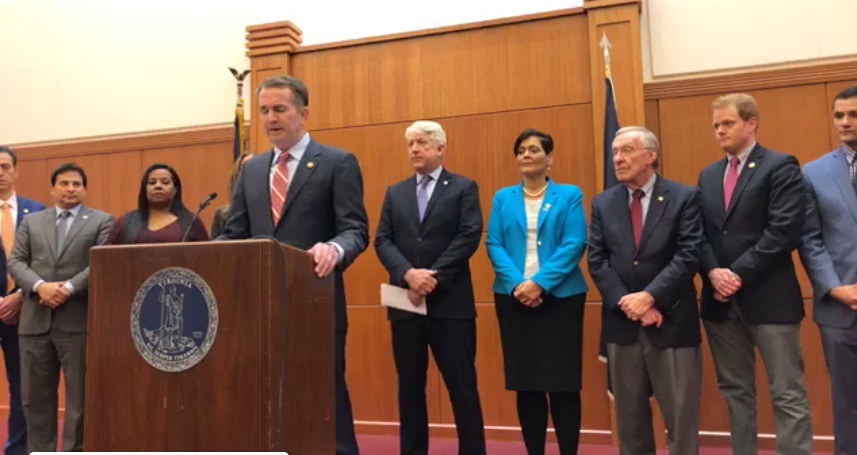 written by Dave Webster February 1, 2019
Now comes the time for dissembling
Today, January 31, 2019, Virginia Governor Ralph Northam held a press conference, punctuated by hooting, hollering, laughing and clapping which sounded like an episode of the Fox show Married With Children, in which he accused Republicans of “playing politics” with regard to a bill which he favors permitting virtually unrestricted third trimester abortions.

Virginia Attorney General Mark Herring, who appeared to have trouble finding out where he was supposed to stand, stated “desperation can be ugly and what we have seen from Republicans over the past few days has been desperate and it has been ugly.”  No mention of innocent babies there. He also claimed that Republicans are responsible for death threats against members of the General Assembly.

As near as I can make out from her garbled statement, Minority Leader Delegate Eileen Filler-Corn (D-41st District) accused Republicans of engaging in “in an all out assault on the reproductive freedom of women in Virginia.” She also labeled objections of Virginia Delegates to unrestricted third trimester abortions as “theatrics” and stated Republicans, by objecting to an abortion of a nine month old baby, are “shaming, bullying and dictating to women.”  She later helpfully assured us that Virginia women will continue to run for political office in Virginia.  I am sure Virginia Delegate Brenda Pogge (R-96th District) and Virginia State Senator Amanda Freeman Chase (R-11th District) were comforted to hear that statement as perhaps there were unaware that objecting to aborting a baby in the ninth month was somehow going to prohibit women from running for office in Virginia.
Noticeably absent from this press conference was any specific reference to the legislation in question.
For those unfamiliar with this tragic affair, on Tuesday, January 29, 2019, Virginia House of Delegates member Kathy Tran (D-42nd District) was asked a question by Delegate Todd Gilbert (R-15th District) regarding her bill to loosen abortion restrictions on third trimester abortions.  Todd Gilbert: “Where it’s obvious a woman is about to give birth…would that be a point at which she could still request an abortion?  Kathy Tran: “My bill would allow that, yes.”  (Here is the text of Tran’s bill.  http://lis.virginia.gov/cgi-bin/legp604.exe?191+ful+HB2491)
After the national uproar, Tran understandably has been backtracking.  Her present ploy is to say she misspoke and that killing a baby in the process of being born would be infanticide, a startling admission to be sure.
Meanwhile, State Senator Jennifer Barton Boysko (D-33) has been busy trying to cover her tracks as the Senate sponsor of this bill claiming the prospective legislation only called for one doctor’s certification rather than two to approve a third trimester abortion and there was no other change in the law regarding the bill she sponsored.
In reality, the proposed legislation would do much more.  Presently, Virginia Code § 18.2-74(b)(2) requires that a physician certify that the continuation of the pregnancy in the third trimester would substantially and irremediably impair the mental or physical health of the woman. Tran, Boysko and Northam want to eliminate the “substantially and irremediably” language which would result in a situation where any quack doctor could approve of a third trimester abortion based upon the now standards “mental health” certification. Tran herself refused to state what “mental health” issues might qualify for a doctor’s approval of a third trimester abortion stating to Mr. Gilbert during the subcommittee hearing:  “It is very unfortunate that our physicians, eh, our witnesses were not able to attend today to specifically speak to that.” (Whatever that means, did she subpoena physicians who failed to show up?) It reminds me of Nancy Pelosi stating:  “We have to pass the bill to find out what’s in it.” Here is the discussion between Gilbert and Tran.  https://www.youtube.com/watch?v=OMFzZ5I30dg  Amazingly enough, Filler-Corn accused Gilbert of asking misleading questions here.  I am not sure what a misleading question is unless it is “Have you stopped beating your wife?”
Tran mysteriously admitted in this hearing that no abortions would be conducted after the third trimester under her bill.  “I don’t think we have a limit in the bill” she said.
Tran’s bill also would have allowed third trimester abortions to be performed in a clinic instead of a hospital.
The response by Tran was typical.  She seeks to turn herself into the victim claiming she is getting death threats, although she declined to specify the nature of these threats.  It’s possible her claim is true and if so it is reprehensible. However, the claim that she is getting death threats doesn’t excuse her execrable proposed legislation.
In conclusion, Governor Northam said he was going to set the record straight.  He did no such thing unless by setting the record straight he meant insulting Virginia citizens who care about unrestricted access to third trimester abortions.
Democrats Want Abortions Until Birth: Claim Republicans Are Waging A War Against Women (Press conference video) was last modified: February 1st, 2019 by Dave Webster