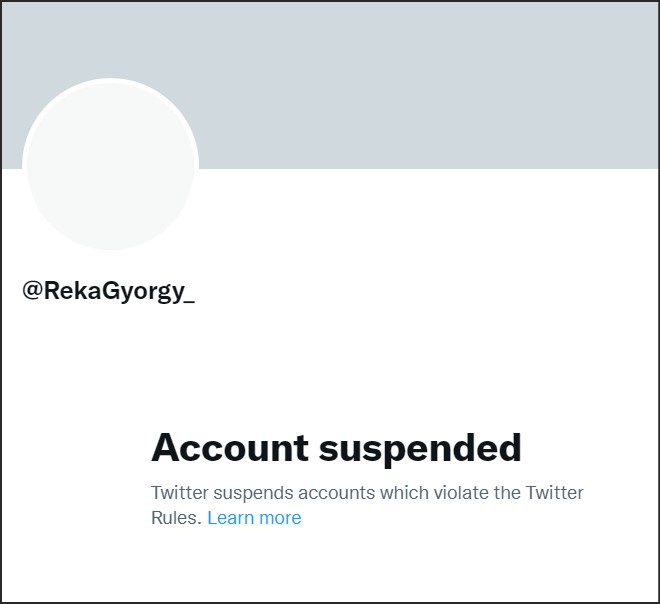 Correction from Jim Bacon at baconsrebellion.com:

Reka Gyorgy, a Virginia Tech senior who missed the cut to compete in the NCAA swimming finals because she was displaced by transgender Lia Thomas, has had her Twitter account suspended.

“I’m a 5th year senior, I have been top 16 and top 8 before and I know how much of a privilege it is to make finals at a meet this big,” Gyorgy said in a letter reprinted on SwimSwam and Swimming World, which she subsequently tweeted. “This is my last college meet ever and I feel frustrated. It feels like that final spot was taken away from me because of the NCAA’s decision to let someone who is not a biological female compete.”

So, not only are biological males who develop male stature and muscle mass and then identify as women allowed to compete in women’s sports, women can’t even complain about it. Expressing frustration is labeled “hate speech,” and the women are de-platformed.

Will anyone in the Virginia Tech or UVa administrations stand up for their female athletes? Or will they let this madness go uncontested? Or, to ponder a not-inconceivable thought, will Virginia Tech sanction Gyorgy for her heresy?

If you said three years ago that something like this would happen, you’d be laughed out of the room. Now it’s our dystopic reality.

Three years ago, it would have been labeled “Conspiracy Theory”…

Of late, conspiracy theories have been fast becoming the truth. And the time frame from “theory” to “reality* has decreased substantially. 🤔

Hey Erica… pronoun She It… a future candidate for Time’s Creature of the Year… say boy… what do you make of the NY Slimes admission that OH MY GOD… the Huntie Biden laptop WAS… gasp… REAL!!! OMG Erica!!!!! Holy Crap!!!.
Hmmm… interesting.. aint it boy/girl/ladyboy… ? They… the Deep State/MIC/Globalist Sons of Bitches have let this story go public… This crap is not by accident numbnuts. It means that the puppet masters who control the system and the stick up the ass of the political clowns.. are dumping dumbass. I guess he’s getting too dopey… and his popularity is too low… too low to steal the next election and he’s dragging down the other clowns they need to do their bidding. There is absolutely no need for the paper of official propaganda to say the laptop is real… they had all the cover they needed with the so called “bastards” I mean national security “experts” saying it was Russian disinformation blah blah etc…
So what are they up to here Erica? Is it adios Depends Boy?

It is mental illness writ large into the legal fabric of our once free country. There are no “trans-gendered” humans. They suffer from a mental illness that is perfectly treatable by professionals who take the role seriously. Sadly many, if not most, “psychologists or mental health “professionals” have abandoned reason and truth for fads. Our country, and the world, is lost.

The medical professionals who took your idea seriously were hounded out of practice and sued under New Democrat inspired laws.

“There are no “trans-gendered” humans.” huh? Of course there are

Leave a Reply to MICHAEL A CROGNALE Cancel Reply