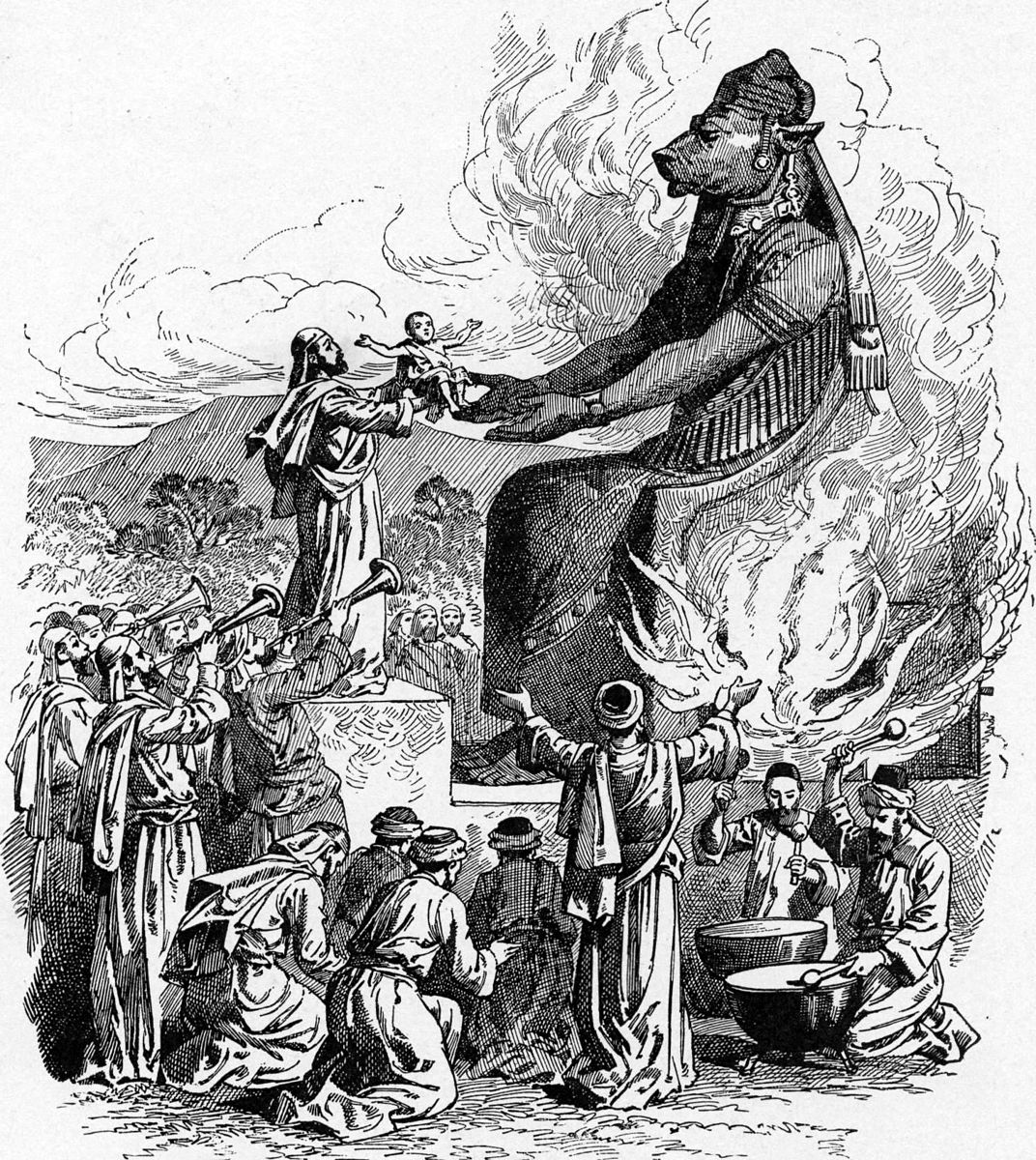 Long ago my classmates and I shivered in Sunday School class when we learned about ancient Mesopotamian people who worshipped the evil god Moloch by throwing their children into a burning bonfire. We wondered how evil like that could have happened. What could the parents have been thinking? And how could they ever forget what they had done? Even as young children we thanked the Lord that our country and our culture was nothing like that.

But, as they say, that was then (USA, ca. 1950) and this is now. Are we the same country that fought Hitler’s Nazis and bombed their country to rubble to stop their evil campaign of genocide? As John Wayne might say, “Not hardly.”

In the half-century between 1973 and 2022, Abortion Rights grew into a potent political issue and became the lodestone of Democrats who once characterized themselves as the “party of the common man.” Guided by the twisted judgment of a misguided Supreme Court, a nation that once called itself “Christian” killed 61 million unborn children, with barely a hint of regret or jot of serious calculation to reckon how much the loss of those future citizens has cost us.

In fact, the destruction has put Hitler’s vile work completely in the shade. His death camps gassed and burned a mere 12 million. What a piker. Abortion has promoted us to the big leagues. Moloch would be so proud. Maybe he’ll make a comeback. After all, as G. K. Chesterton observed, “When men stop believing in God, they don’t believe in nothing; they believe in anything.”

Experienced political observers and analysts say that when politicians want to draw the public’s attention away from some disadvantageous issue, they often pose another issue in its place. But frequently the replacement is just as bad as the original issue – or even worse.

That very phenomenon is happening here today. What might be called the “transgender craze” is grabbing attention and headlines all across the country. Media of all stripes love it because it answers their central question: Where’s the conflict? Boys dressed in drag want to use the girls’ restrooms and locker rooms, and in many cases they’re getting official approval to do so. (Is this a great country, or what?)

Male athletes who claim they have transgendered to “shemale” are winning women’s athletic events – robbing real females of titles and scholarships which should be theirs. The radical chic political movement of “transgender rights” – based only on “feelings” claimed by persons involved – is being championed by educators, politicians, and medical people who should be laughing hysterically at a cause basically equivalent to “the earth is flat.”

But the transgender craze is much more than boys ogling girls in the locker room and deranged “educators” spouting nonsense in the classroom. These are disgusting enough, but the trans-movement’s true descent into darkness involves deliberate physical deforming of children who think they want to change to the sex opposite to their true biological self.

Girls who want to be boys – but never will be – are having healthy breasts and reproductive organs removed, and are receiving steroid-dosages to prevent their normal development into adult women. Likewise, boys too young to understand the non-reversible implications are having their masculinity destroyed by destructive surgery and administration of puberty-preventing drugs. None of the girls and boys undergoing these macabre procedures will have their biological chromosome-arrangement altered from XX (female) or XY (male). These are unchangeable.

Where will all this wicked “gender-affirming” sex-change surgery and medication take us? Who will be affected, and in what ways? I see at five likely directions and affected groups:

If you’re a praying person – and even if you aren’t – pray for the country’s deliverance from these evils and for our full recovery. It’s a grim time, and we need all the help we can get.

“Woe to those who call evil good, and good evil; Who put darkness for light, and light for darkness; Who put bitter for sweet, and sweet for bitter!” (Isaiah 5:20)

“These people are springs without water and mists driven by a storm. Blackest darkness is reserved for them.” (II Peter 2:17)

Luke Bowen, political director of Texas Right to Life (anti-abortion group) was arrested for trying to solicit a child for sex.

Bowen was arrested this month in Conroe, Texas, for online solicitation of a minor. In a story originally broken by the alt-right publication, Current Revolt, details of the August 3 arrest are still developing.

No wonder Texas Republicans love him . . . he’s one of them.

Let’s just go right to the educators;
So the folks that once believed boys with ants in their pants had a hyperactivity disorder or ones that didn’t score well enough on test couldn’t focus and they were need drugs to subdue their personality now can tell that a boy needs to be a girl.
At this point I believe parents should have the revenue support from their state to assist the parents in “Choice in Education”

I am certain that if you review the school shooters over the past thirty or so years, they were highly medicated with the various behavior altering drugs… the factCheckers TM, brought to you by Pfizer will tell you that the drugs are safe and effective.. like the vaccines that don’t work..
Yes.. an excellent point my friend… Since the ritalin, and all the other drugs weren’t working… why not turn the boys into girls? Girls at any rate used to be tempermentally suited to sit in schools chairs for eight hours… Well the only problem is… some of those little dress wearing deviants might get into the girls’ bathroom for various jollies… like flashers of old… or worse. See the Loudoun county dress boy who molested girls and is now in jail… tried as an adult.

Hey Team Piglosi… Did you ever look at the statistics for abortion in the black community.. I know you care so deeply about BLM.
It amounts to genocide. Erica, the Halfwit was saying the other day that the war on terror was a racist war. Maybe so Erica.. as discussed your favorite politicians… Obama… Clinton… Bribem… happily bomb bomb bombed em in Iraq… Afghanistan… Syria… Libya…Pakistan.. remember Obama’s drone strike that killed a muslim and his son? You got all incensed over W Bush waterboarding but when the Big Zero drone struck someone and collaterially killed their children… crickets.. So Team Blue must be racist…
And they support infanticide of the black community…

Slightly over 1% of the ENTIRE POPULATION OF THE U.S. identifies as transgendered.

To listen to you and the rest of the Republicon Party, half the population is being “guided” by teachers into becoming transgendered.

Q: Why do you people insist on spreading this garbage?
A: Because you have nothing to offer but fear and lies.

Okay then, Klinger… Old Redneck phony Vietnam Vet… then why is it so important for the Loudoun school board to allow boys in dresses to go to the girls bathroom. If it is only 1 percent let the drag queens go to the bathroom dictated by their genitals. Why do crap eating liberal academics in the so called medical profession now change their policy? Encouraging self mutilation for children and hormone therapy? Why do you have to push biological males into women’s sports… so brave!! Why do idiot teachers have to encourage this crap? One day a 14 year old might want to be a girl… or a punk… or a goth.. Let’s not encourage them into changing their sex. How about the teachers stay away from this crap the same way that you want them to stay away from teaching children about Jesus…

This insanity has been brought about to satisfy the lgbtq agenda. All children are at risk of these groomers.

“groomers”. Until a few months ago, the only “groomers” you clowns knew anything about were dog groomers. Now, every person who has contact with a kid is a groomer.

You idjits are sick — it’s called “projection” — you are projecting onto others your own proclivities.

So you did a really good job of hiding your perversion. Now the truth is out and it isn’t about dog grooming anymore. As a parent, I am now going to assume “trust but verify” is the appropriate standard when it comes teachers. You are exposed for what you are and it is a direct and subversive attack on innocent kids.

You scourngy scumbag… the boy in a dress assaulted two girls dumbass.. He was going to be sentenced to jail, but the victim’s mother, the wife of the man assaulted at the school board meeting on the topic of bathrooms asked for leniency. There was no innocent he said she said crap… You are the scumbag phony Viethnam Vet spreading lies.

Read the police report, not the ravings of loons at school board meetings.

What are your pronouns Old Redneck? I bet you look great in your evening dress with the feather duster. don’t you? As a phony Vietnam vet, drag queen..

Just for the record:

“As of 2006, the State University of New York Upstate Medical School in Syracuse was the only U.S. medical school that administered the classic version of the Hippocratic Oath to its graduates. The Hippocratic Oath has been revised to make it more acceptable to modern schools, but the medical profession no longer has a common set of promises that guide it.”

Circa 2018: “ While nearly all U.S. medical school graduations include a public promise, and some use an updated version of Hippocrates’ words, not a single student utters the original Hippocratic Oath”

So leftists perverted that too.