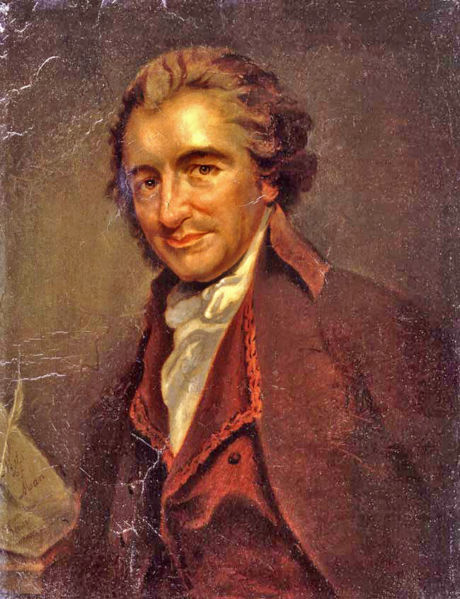 The latest blockbuster to hit the political scene has been the sensational revelation that a “mole” planted inside the Trump campaign was passing info to national security and FBI officials who thought Russian operatives might be colluding with the Trump people to turn the election their way. (At least, that was the working story.) So far, nothing has been revealed about what that plant actually reported, but you don’t have to be a conspiracy-theorist to imagine that he probably didn’t focus solely on the Russia-issue. We have no solid information on whether the informant was:

Diehards who believe that Trump/Russia-collusion really happened are valiantly arguing that spying on Mr. Trump was really no big deal, since Republican administrations probably did the same thing to past Democratic presidential candidates. Besides, they say, even if an “informant” was inside the Trump campaign, he wasn’t spying on Mr. Trump but keeping an eye peeled for any intrusion by the Russians (or any other foreign powers). In recent days, former Director of National Intelligence James Clapper went on national television to claim that the feds were actually trying to “protect” the Trump campaign from foreign interference. Insiders say this whopper actually caused some liberal talking heads to collapse backstage in gales of laughter. It was a real thigh-slapper, as grandpop used to say.

Apart from the comic-relief of Mr. Clapper making himself look like a complete fool in front of the whole country, Republicans and even some Democrats are less than amused. (As I often say, it’s not really funny enough to laugh at, but we’re too big to cry.) More than one commentator or conservative politician has observed that the ACLU, Big Media, and the entire Political Establishment would be shouting from the housetops and storming the barricades with pitchforks, had a Republican administration placed a spy in a Democratic candidate’s presidential campaign. It simply is not done in this country – in Russia, maybe, but not here.

Pathetic claims that this was done to the Trump-campaign without President Obama’s knowledge can’t pass the laugh-test. Good golly, Miss Molly! Of course Obama knew. He had to know! He undoubtedly ordered it. An action this risky and potentially explosive would never be taken without the president’s explicit authorization. The Big O and his DoJ are in this up to their necks, and it doesn’t look like many august personages are poised at the swamp’s edge to throw them a lifeline. Have you noticed the deafening silence from Bill, Hill and Obama? Where are those worthies? Busy, no doubt, counting the gazillions they’ve reaped from their book- and Netflix-deals, etc. (It’s grand to be a Democrat.) 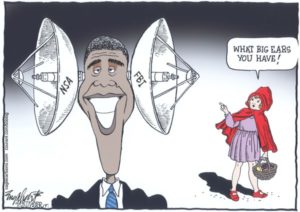 Bit by agonizing bit it’s becoming clear that Obama’s national security and law-enforcement officials were willing – perhaps even eager – to take these risky measures because they were certain that Mrs. Clinton would be elected. They believed she would keep them in their positions of power and sweep all this dirt under the rug. One observer (who requested anonymity) described the Democratic scene around 9 PM on election night, when it became clear that Mrs. Clinton was going down to a historic defeat: “Complete panic set in, and the whole thing went to hell in a hand-cart…”

In those desperate hours, deep into the night following the disaster, the Russian-collusion story morphed from a pot-party fairy-tale into a serious strategy designed to smother the Trump presidency before it could get out of its crib. An ever-compliant Mainstream Media eagerly assumed its Greek Chorus role, launching a steady chant of “Russia! Russia! Russia!” to convince the public that the election had been rigged and that The Donald was a corrupt pretender who could not be considered a “legitimate” president.

Was the Russia-collusion strategy formed on the fly, when Deep-Staters realized that Hillary was kaput? Or had the strategy already been fashioned, just in case the unthinkable happened? Perhaps we’ll find out one day, but we might never know. Once Hollywood awakes from its Never-Trump trance, possibly years in the future, it might start making films in the Seven Days in May1 genre that dramatize the corrupt events which became the unfortunate signature of the Trump era.

Will there be an end to these miserable revelations of devious and corrupt conduct by our once-trusted government-officials? Probably not for some time. As the power of Obama and the Clintons wanes, while Mr. Trump’s power grows, more former officials will be emboldened (or compelled) to come forward and disclose how they perverted the integrity of our electoral system in a vain effort to keep Donald Trump out of the White House.

The irony of the whole miserable mess, of course, is that many of these once-honorable public servants probably thought they were performing a genuine patriotic service by trying to prevent the election of a man they believed to be a danger to the country. But in undertaking these subversive actions they lost sight of something important: that ours is a government (as Lincoln said) “of the people, by the people, and for the people.” The framers of the Constitution entrusted us with self-governance, and it is neither the prerogative nor the duty of public servants to correct or block the people’s choices in these matters. That significant numbers of intelligent public officials actually thought election-treachery was a valid expression of patriotism is a breathtaking and deeply depressing revelation.

My regular readers know that I usually look for some humor in the situations and events I comment on. Something humorous is usually there, but I can’t find much to laugh (or even smile) about in this case. This is not the America I grew up with and believed in, and this was certainly not our government’s finest hour. It is a wretched time that most of us will be glad to see receding in the rear-view mirror.

“Put not your faith in princes”2 wrote the Psalmist three millennia ago. He might have been writing about today. May the Lord grant us the grace and courage to endure and surmount these evil days. Thomas Paine’s famous words from another desperate time still inform us today:

“THESE are the times that try men’s souls. The summer soldier and the sunshine patriot will, in this crisis, shrink from the service of their country; but he that stands by it now deserves the love and thanks of man and woman.”3

Desperate Times was last modified: May 29th, 2018 by Woody Zimmerman

In the good ole days, police-state corruption was condemned by both parties, for the sake of the democracy. If it’s now okay to use government surveillance and police powers to destroy political opponents, then the US isn’t any better than the old Soviet Russia we condemned in the past. Somebody must actually be convicted and punished for this level of corruption, otherwise the next steps in our political decline are terrifying.

None of the Establishment bureaucrats were honorable. They did Clinton’s Obama’s bidding. The Clintons and to a lesser degree Obama are genius at using the bureuacracy for their own ends.

That paragon of virtue, Robert Mueller for example, didn’t find anything wrong with the Uranium One deal… Hey what happened? The Establishment of both parties was Okay with Russia then! A deal which gave RUSSIA OH MY GOD, the rights to 20 percent of US uranium deposits was peachy back then.

This Russia Sh-t and the Clinton e-mail server abortion (by that other great American Comey) are infuriating. They are infuriating mostly because they are so thinly veiled corruption that all but the most idiotic Democrats can’t see how the US government was corrupted by the Establishment within the parties and their lackeys in the bureaucracies. At least engage in sophisticated corruption that is hard to figure out…