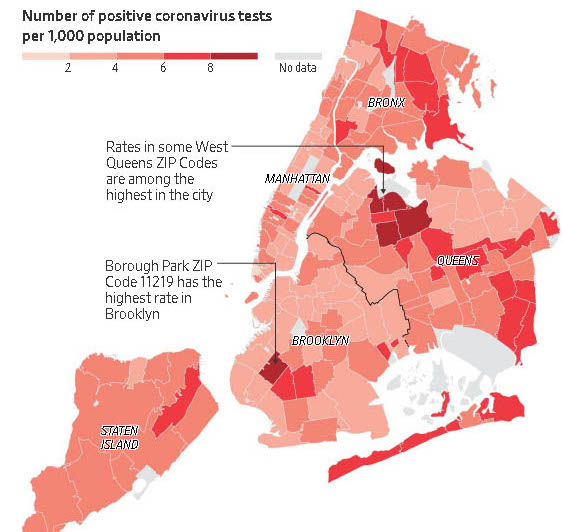 Wall Street Journal map showing where COVID 19 cases have been the highest -- the Latino and Asian communities in Queens, and Orthodox Jewish communities in Brooklyn

Did fear of being labeled â€˜racistâ€™ lead to the deaths of thousands from COVID 19?

For weeks, on my Facebook page, I have been reporting from the Orthodox Jewish press and Israeli press the inordinate number of cases in these communities, and thankfully, no-one in my community in Norfolk is sick.Â  But most of the Jews here knows someone who is ill â€“ generally, in New York or New Jersey, where there are numerous â€œblack hatâ€ and Chassidic neighborhoods.

But the national media have generally ignored the demographics of this disease, except to note that the elderly and infirmed at highest risk â€“ especially if they are concentrated together.

Finally, the Wall Street Journal April 1 finally confirmed what I have known for weeks â€“ that communities that are densely packed are most at risk and that New York officials suppressed this information for weeks.

The Journal reports exorbitant contagion rates not just in Brooklyn, but in the densely-populated and predominantly Latino neighborhoods of Corona, and the heavily Asian (Chinese) community in Elmhurst, both in Queens.Â Â

According to the Journal:  â€œCorona and Elmhurstâ€”have led the city in reported infections, with 947 and 831 as of March 31, respectivelyâ€¦Both neighborhoods are heavily populated by immigrants who live in close quarters, often with multiple families sharing an apartmentâ€¦â€œOne person gets sick, it spreads around that household,â€ a city councilmember, Francisco Moya, is quoted saying.

And, we know that COVID 19 is very contagious via casual contact and has a long incubation period â€“ about 14 days.  So, there could be more cases than what is being reported, and not just in the US but worldwide. China is now being accused of underreporting their actual case rates.

Three issues are important in terms of this article:

First, we know that this disease emanated from China, which is why President Trump canceled air travel from China to the U.S. Feb. 4.Â  But is there a â€œChina connectionâ€ with the Elmhurst community and is that where the disease spread so rapidly in the first place â€“ at least in New York?

We do not know for sure, but we do know that Trumpâ€™s order barring air travel from China to the U.S. occurred only on Feb. 4 and it was criticized by liberal leaders and commentators:  In this article, New York Cityâ€™s health commissioner appeared with Chinese community leaders to urge residents to attend the Feb. 9 Chinatown parades!

And, perhaps a large number of residents of the Corona community were carriers, too â€because they work in the hospitality industry, at restaurants or supermarkets,â€ Moya says in the Journal article.

So, is it possible that these folks who work in these service industries spread the disease â€“ unwittingly â€“ to their customers â€“ and beyond?

On March 3, disease prevalence started to become publicized in the Orthodox Jewish community, when members of a New Rochelle, NY, synagogue became ill with the virus andÂ self-quarantined. Â However, that message did not get across to the rest of the dozens of Orthodox conclaves in the New York Metro area, all of which celebrated Purim â€“ in which people go from house to house in celebration â€“ March 9 and 10.Â  Many probably traveled to and from other Orthodox conclaves to celebrate with relatives.Â Â

You would think public health officials and politicians would have learned something about the black hat/Chassidic communitiesÂ after the measles outbreakÂ  New York fall, These folks live, work and pray close to each other.Â  We are always communing among our â€œchosenâ€ kind! Plus, they have large families and visit often to other communities in the New York area and Israel.

So, Purim, sometimes called the â€œJewish Mardi Gras,â€ did a number on the tightly-knit Orthodox communities in New York and New Jersey the way the Christian Mardi Gras hurt New Orleans, and I would suspect the Chinatown parades infected the Chinese communities and other onlookers in New York in February!

The second issueÂ here is travel. Trump did not issue social distancing guidelines until March 16, which called for a 14-day quarantine for in-bound air travelers.Â  However, travel to Israel went on as did domestic air and auto travel. Israel now has a growing problem with COVID 19 among densely packed Orthodox Jewish communitiesÂ Â

In addition, ground travel continued in the U.S. until more and more states instituted â€œStay at homeâ€ orders, but many â€“ even in the affected areas â€“ are ignoring this. Some are trying to get out of New York due to the disease.Â Â

Still, New York Mayor Bill DeBlasio, as late as March 10, was minimizing the threat of the disease including still saying it was okay for New Yorkers to take the subway.Â

The third issue is the failure of both federal, state and local public health authorities toÂ target those specific disease-prevalent areas with stay-at-home and other lockdowns, versus the entire nation. Â I believe targeting would have been less deleterious on our nation.Â Â Â Â Â Â

Dr. Michael Augenbraun, director of the infectious diseases division at SUNY Downstate Medical Center in central Brooklyn, said â€¦ the data could be useful for doctors â€œto get a detailed situational appraisal, to know how much of the burden we are confronting.â€

â€œThere are many things that may correlate with the spread of infectious diseases,â€ he said. â€œRace might be one, poverty might be another.â€

But Denis Nash, a professor of epidemiology at CUNY School of Public Health, said he believed the city might be reluctant to release more data because of concern about stigma. â€œThere has been a documented outbreak in Hasidic communities in New York state; my guess is that if they released the data it might highlight something more that could create tension where people could be discriminated against,â€ he said.

New York stateâ€™s COVID 19 figures do not report cases by race, sex, and age, nor does New Jersey â€“ the No. 1 prevalence area.Â  Is this designed to stop stigmatizing? Maybe so, but itâ€™s imperiled millions.

TownHall.com has a more-detailed story showing how DeBlasio and his administration screwed this up badly so they could be â€˜wokeâ€™.

Even Dr. Deborah Birx, the COVID 19 coordinator and originally appointed as AIDS ambassador at large by President Obama in 2014, Â  told a White House briefing last week the Coronavirus caseload in California â€“ which is more populated than New York â€“ is lower because Â â€œofficials there acted earlier.â€ Â

And, Dr. Anthony Fauci, director of the National Institute of Allergy and Infectious Diseases, said Italyâ€™s problem was due to Chinese tourists

As of today, April 3, the U.S. has more than 270,000 confirmed cases of the China virus, and more than 6,000 deaths – – of which more than half are from two states, New York and New Jersey, and most of New York stateâ€™s cases are in the Five Boroughs of Mayor Bill DeBlasio.

Now, our economy is crushed due to draconian measures that governors have instituted to play catch up due to the failures of New York and  New Jersey politicians to focus social distancing and stay-at-home orders, and testing, on the specific communities with most disease prevalence, perhaps because they didnâ€™t want to look racist.  And, the country is paying the price for their political correctness.

Did fear of being labeled â€˜racistâ€™ lead to the deaths of thousands from COVID 19? was last modified: April 4th, 2020 by Guest Contributor Ken Reid

[…] week, I faulted New York and New Jersey officials for the death rate and spreading in their states and itâ€™s largely due to the failure of the Centers for Disease Control and Prevention, state and […]