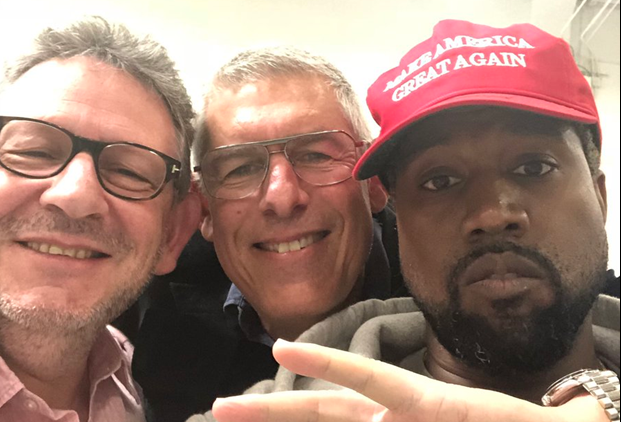 Whatever you do, don’t put on a Make America Great Again hat.

After the rap star tweeted something supporting President Donald Trump — insofar as it was not anti-Trump — his whole world changed. On April 25, West wrote, “You don’t have to agree with trump but the mob can’t make me not love him. We are both dragon energy. He is my brother. I love everyone. I don’t agree with everything anyone does. That’s what makes us individuals. And we have the right to independent thought.”

It didn’t matter that in that same minute, he also tweeted, “I love Hillary too” or that right before, he had prefaced the tweet by stating, “Free thinkers don’t fear retaliation for your thoughts. The traditional thinkers are only using thoughts and words but they are in a mental prison. You are free. You’ve already won. Feel energized. Move in love not fear. Be afraid of nothing.”

Or that a minute later he added, “Love who you want to love. That’s free thought. I’m not even political. I’m not a democrat or a republican.”

None of that mattered to the thought police, who immediately sprang into action as West was savaged on his own Twitter feed. It wasn’t that he had posted something that was pro-Trump. It’s that it wasn’t anti-Trump.

Later, West posted a picture of himself wearing a Make America Great Again hat and a picture revealing that his hat had been signed by Trump personally. And then a picture of the President retweeting West, thanking him and writing, “very cool!”

Songwriter John Legend later texted his friend, which West posted, stating, “So many people who love you feel so betrayed right now because they know the harm that Trump’s policies cause, especially to people of color. Don’t let this be part of your legacy.” To which, West replied, cordially but pointedly, “I love you John and I appreciate your thoughts. You bringing up my fans or my legacy is a tactic based on fear used to manipulate my free thought.”

Later, Chance the Rapper tweeted in support of West, “Black people don’t have to be democrats” and then predicted the next President would be an independent.

That was enough to break the Internet. Chance, particularly, inspired by West, had single-handedly smashed identity politics in a single tweet. It seems some won’t be silenced so easily.

West later doubled down on Twitter, writing, “Claudio will be awesome when me and Chance build new homes in Chicago” and “Obama was in office for eight years and nothing in Chicago changed.” Whoa.

It must be noted that it is practically impossible to draw an electoral map Democrats can win particularly in presidential contests without the near universal support from black Americans they currently garner — who comprise 12 percent of the population but 89 percent of whom tend to vote Democrat according to exit polls.

What Chance suggested really cuts to the heart of any political power Democrats currently wield because it begs the question, what if blacks didn’t vote for Democrats?

Leaving that aside, that doesn’t mean there would a sudden shift to vote Republican either.

West has clarified that he does not necessarily share the President’s political views. It was not an endorsement as much as a show of respect to the President of the United States. Similarly, Trump’s supporters might find little else in common with West, but there’s a larger point West is making that does have a universal appeal.

Perhaps it’s just as West said and he’s tired of all the hateful politics and political violence that have become so prevalent today, and so wished as he stated to express a unifying message of love, letting Americans of all creeds and color that it’s okay to disagree because at the end of the day, we’re still all Americans.

Actor Rob Lowe had a similar tweet in response to the ratings success of the new Roseanne show, which features Roseanne as a pro-Trump lead character. In it, Lowe called attention to something that has been seemingly lost today but is actually just being ignored. Millions of Americans “who are able to laugh and love together as they passionately disagree,” in Lowe’s words, which describes my family and surely yours, too.

That’s the America I believe in. The one with a dialogue that actually exists in everyday life, if not in the invective and personal attacks we typically find from the social media political warriors behaving as society’s thought police, who are so invested in identity politics and political correctness they cannot countenance such a stunning development as free thought.

For example, Rolling Stone’s Jon Dolan, who has written plenty of positive reviews of West, in the past calling his work that of a “genius,” was particularly vile in his denunciation, writing, “It’s music that until this deal-breaking week most of us could still listen to with revelation and enjoyment.” Dolan still called him “the engine of a massive amount of amazing music full of raw beauty and exhilarating contradictions” but concluded he was a “jerkoff” so as to leave no doubt.

You see, now that West simply said he loves Trump and called him his brother — and Hillary and all people, too, but forget about that — and that’s “deal-breaking.” How could a message of peace lead to such venom?

Still, how refreshing. And how telling it is that today people thinking for themselves is so controversial. Bravo to Kanye West for putting an exclamation point on it.

Let’s all get out the popcorn for this one.

And, this is a great article. Very well written.

That about sums up Democratic thought, tactics, and quite literally, their history of hatred.

Good stuff you posted.
We must be careful though;
Is this story meant to marginalize Trump supporters and in the long run make us out to be supporters of West and Celebrities like him? TBE and many of her writers have not been posting articles of Trump’s accomplishments.
It is great to see others be supportive of an American President.