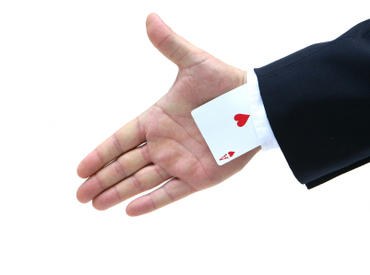 Dirty Tricks Against the Dunbar Campaign By Bearing Drift?

If you are one of the few who are still perusing the offerings over at Bearing Drift, you would notice that they seem to have a single-minded purpose in preventing the nomination of Cynthia Dunbar for the 6th District Congressional seat.  Their writers have posted scathing pieces about Cynthia, and they have printed every anti-Cynthia Op-Ed they can get their hands on, including a series of at least 7 Op-Eds by an individual who goes by “James Harrison.”  I say goes by because he does not seem to be a real person.  Unlike every other Op-Ed writer for Bearing Drift, Mr. Harrison does not have any bio attached to his pieces.  The only other Op-Ed that does not have a bio attached to it is from a long-time commenter who goes by an obvious psuedonym.

Mr. Harrison seems to write exclusively about the 6th District Congressional race.  Specifically, he writes hit pieces attacking Cynthia Dunbar and Scott Sayre, making all kinds of unfounded allegations about improper conduct, droning on about the minutiae of political inside baseball, and mistakenly believing ex-oficio members of a committee get an official vote.  His most recent piece, however, goes beyond that and claims to have evidence that the Dunbar campaign had early access to the delegate lists. As proof,  he offers a screenshot of a snippet of the Augusta County delegate list, and in front of that is a screen purportedly showing the metadata properties of that file.  This metadata seems to show the file was created by Dan Moxley on March 8th, and modified on March 9th.  Mr Moxley, aside from being the Secretary of the Augusta County Republican Committee, is also working for Cynthia Dunbar.   Here is a screen shot from the Bearing Drift piece. 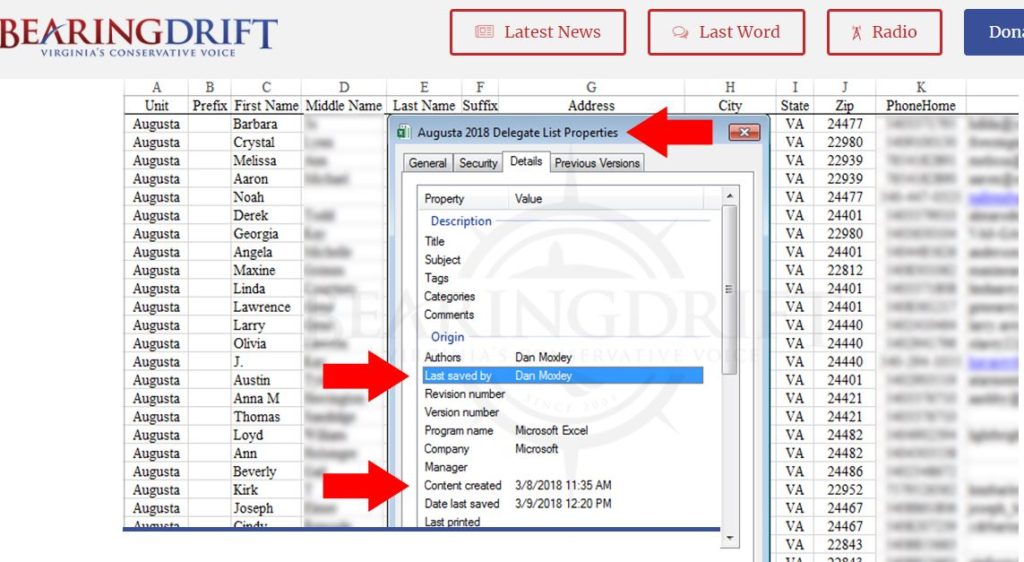 Since the delegate lists were not officially released to the candidates until April 6th, this would seem to provide concrete evidence the Dunbar campaign did indeed have early access to the Augusta county list, and lied about having it.  There’s only one problem.  This is one of the easiest things in the world to fake.

After getting out of politics I began a career in software development. I have worked for the past 10 years writing and maintaining computer programs for a major government contractor in the area.  To demonstrate how easy this is to fake I went ahead and created my own file showing James Harrison as the creator.

First, I created a secondary user account on my computer.   For my purposes I used Mr. Harrison’s name.

Second, I changed the calendar date on my computer to March 8th.

Next, I logged into my computer using the James Harrison user account and created an excel file.

After saving the file, I then changed the calendar on my computer again to March 9th, added some content to the file, and saved it again.  When you check the metadata properties of that file, this is what you find: 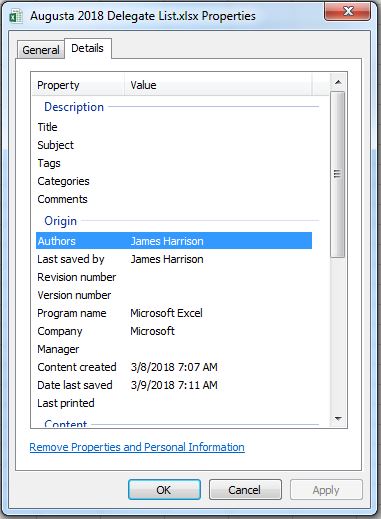 Notice the similarities to the “evidence” presented against Dan Moxley?  I then took a screen shot of the metadata in front of the excel document I created: 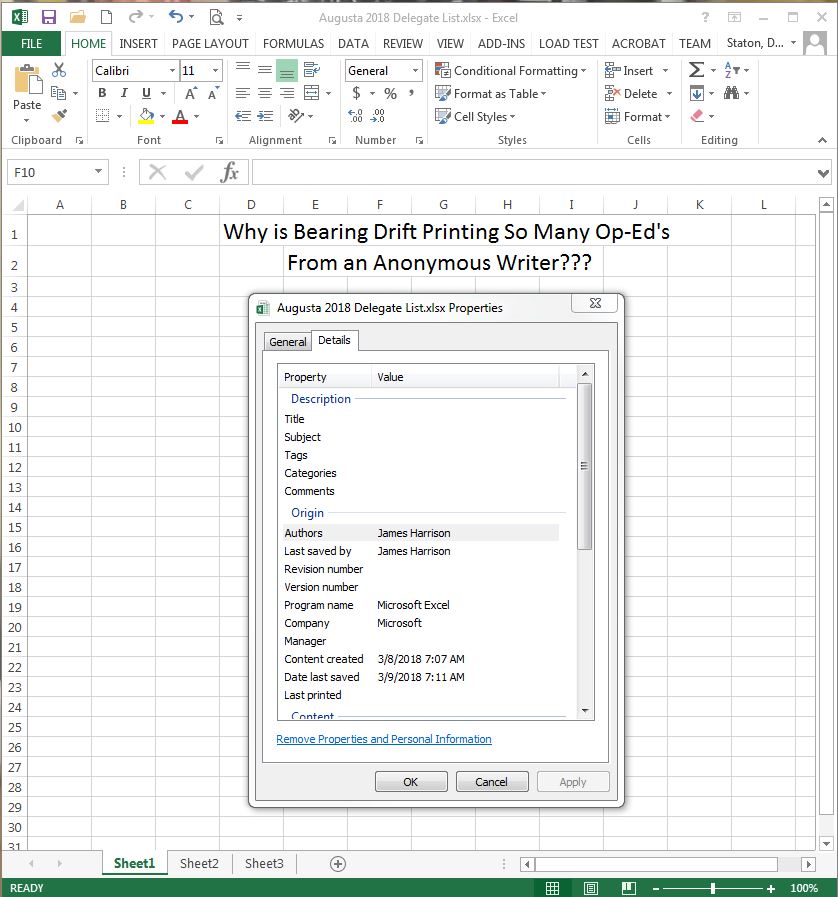 Or I could have positioned the metadata in front of an official delegate list, like the one I have for the 2016 10th District Convention of which I was a candidate for National Delegate: 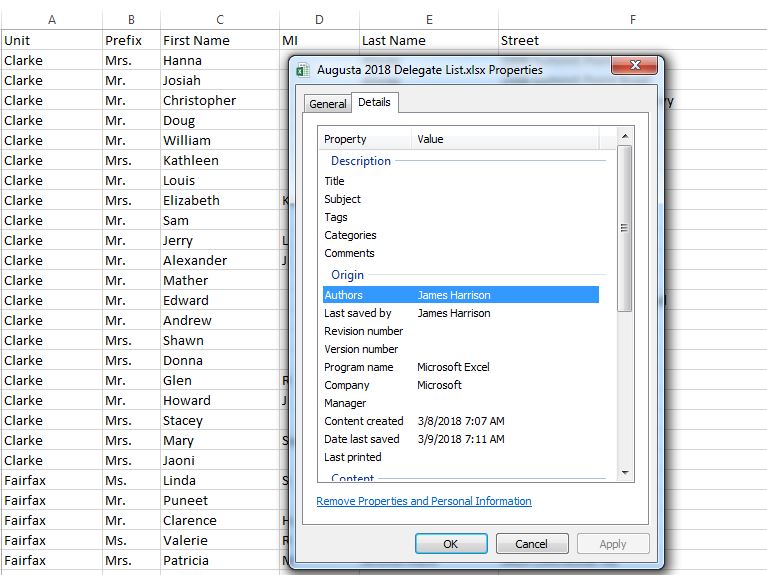 Looks strikingly similar to the “evidence” presented against the Dunbar campaign, doesn’t it?  This entire process took me about 5 minutes.

I don’t even have to resort to simple screen shots.  With proper access to the delegate list, as Mr. Harrison appears to have, I could have copied and pasted the entire Augusta county list into my newly created spreadsheet with the fake metadata and, viola!  Instant evidence of malfeasance by the Dunbar campaign to be shared with anyone I choose.

Could the file metadata be real? Yes, it could, but the campaigns have had this file for over a month, and any campaign worker that opened the file and made the slightest change/addition/deletion (even changing the formatting, or resizing the columns) would have changed the metadata for the “Last saved by,” and the “Date last saved” fields.  In order to believe that this metadata is genuine, you have to believe that this file has been essentially untouched by the campaign since they received it.  Furthermore, you would have to believe that a campaign that has been desperate to prove malfeasance by the Dunbar campaign just now thought to look at the metadata for this untouched file of critically important delegates.

Does that sound likely to you?

At this point, I think it is fair that the real identity of Mr. James Harrison is revealed.  Other than a piece written by an obvious pseudonym, he is the only Op-Ed writer for Bearing Drift that does not have any biographical information connected to his pieces (I have screen shots of all of them in case BD tries to add something later, BTW).  He obviously works for one of the campaigns opposing Cynthia Dunbar since he has access to the delegate lists in order to put together his “proof.” and has spent days (if not weeks) researching and writing hit pieces about alleged campaign violations that only a committed insider with knowledge of the campaign process would even care about.  I have sent a request to Bearing Drift to ask for Mr. Harrison’s contact information, but have yet to receive a response.

Mr. Harrison likes to throw around claims of campaign finance violations against Cynthia Dunbar and Scott Sayre.  I wonder if allowing a candidate to post obvious campaign messages on a blog without the proper “authorized and paid for” identifications would qualify as a campaign finance violation?  Or should whatever campaign Mr. Harrison works for be listing Bearing Drift as an in-kind contributor? Either way, whichever candidate it is should at least have the guts to own the charges they are making.