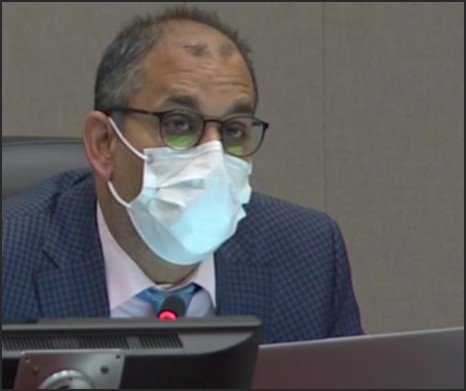 The adults are losing control of Prince William County public schools. Fighting and alcohol/drug-related violations increased 20% during the first three quarters of the current school year compared to the same period in the pre-COVID year of 2019-20.

In the third quarter alone, middle and high schools recorded 515 alcohol/drug-related violations, up from 344 in the second quarter. The division recorded 722 fights, up from 463 the previous quarter, according to a presentation to the schools’ Safe Schools Advisory Committee obtained by InsideNoVa.

What’s interesting about this article is that school officials (1) are acknowledging they are having huge disciplinary issues; but (2) are blaming the rising level of fighting and drug abuse on the shift from in-school to at-home learning during the COVID epidemic. No one quoted by InsideNoVa expressed concern with the impact of the “restorative justice” paradigm for dealing with disciplinary issues. Indeed, school officials are doubling down on the “progressive” prescription for disorder in schools.

The remarkable thing about the surge in fighting and drug abuse statistics is that all the bureaucratic incentives are to under-report disciplinary infractions. School officials want to show that the restorative-justice approach is working. But clearly it isn’t.

“Nearly a dozen county teachers who have spoken with InsideNoVa over the past three months said that since the pandemic began they have encountered more classroom disruption and see a greater need for social, emotional and mental health resources.

The fear among some is that the increased burden on teachers will only drive more from the profession, despite teacher pay increases like the over 7% raise in average salary for certified county school system staff next year.

“People are pretty exhausted, and these are people who mostly do this because they love teaching,” said one county high school teacher.

He told InsideNoVa that his school has seen an increase in drug use and fighting, both in the form of “small pushing and shoving” that typically doesn’t rise to the level of being reported and bigger fights that can leave kids hurt.

The school system’s most visible response to the growing anarchy is to hire more school counselors. The school budget funds more than 22 new full-time counselor positions next fiscal year, bringing the total to 338 — although there is no guarantee the positions can be filled.

InsideNoVa‘s sources didn’t put it quite this way, but under the reigning “restorative justice” paradigm, the job of the school counselors is to teach students norms of behavior they should have learned at home. Director of Student Services Rebekah Schlatter describes the challenge this way:

“For young students, Schlatter said, the classroom education often includes teaching kids about emotions and why they may feel different from day to day. As students get older, she said, much of the focus is on teaching students how to recognize when those emotions or feelings go from typical swings to something potentially more serious.“

The silver lining of this report is that school officials are acknowledging the downside — ignored at the time — of keeping kids away from school during the COVID-19 epidemic.

“I don’t think we’re outside the national trend with what’s going on in schools … and I do believe it is a direct result of keeping kids home for so long,” said School Board Chair Babur Lateef. “That has been a challenge, and getting everybody resocialized, reengaged and getting the learning recovered has been incredibly challenging. It will continue to be for both the short term and the long term. I mean, there is no quick fix for this.”

Does anybody want to guess how much actual learning took place in PWC schools this year? We’ll find out when the Virginia Department of Education (VDOE) publishes SOL data later this year.

I’ve been saying this for the past year… I am going to toot my own horn. Toot Toot!~!!! The schools are becoming disasters… As I said in the previous article about the stupid discipline system that won’t work at FCPS… or will only because they have affluent kids… teachers cannot stand the kids anymore. The administrators won’t back them up… they come up with stupid crap like exhibited in the last article. And parents are often just as bad as the lousy kid. Young teachers can’t take it and leave. My daughter had to teach for a bit while she got her masters in Roanoke city schools… The students will challenge you to fight. Push… hit. etc.
That is the public school reality. And the simpletons like Erica and Simple Johnny have no idea of reality… like they think Bribem is a great President. Those two clowns will be here to comment soon.
You are watching the decline of this country right here… with what this author is presenting. This is reality. It is everywhere across the country…
Instead of obsessing over CRT or Drag Queen indoctrination this stupid country had better pay attention to the collapsing reality.

Once again, the only real solution is vouchers. This problem cannot be solved within the current system as the current system caused the problem. It is like asking the fox to guard the chicken coop, and when the number of chickens continue to decline you allow the fox to blame the hawk.
Blaming the pandemic and school closures is quite convenient – and it ignores the obvious negative impact of CRT, LGBTQ, illegal immigration, and societal breakdown in general. The progressives, aka socialists, have caused this and absolutely refuse to change.

Democrats are so stupid they still don’t realize that if you don’t punish bad behavior, you will get more of it. AND the worse the unpunished bad behavior is, the more people will get hurt or worse. When teachers feel threatened, they turn their backs to the class, right something on the blackboard, and ignore the classroom disruptions because if they act to quell the fight, they will be call racists or some other nonsense by someone somewhere sometime. So, just give everyone an ‘A’ and the problem is solved. Enter Common Core.

Get your kids out of public schools, people!