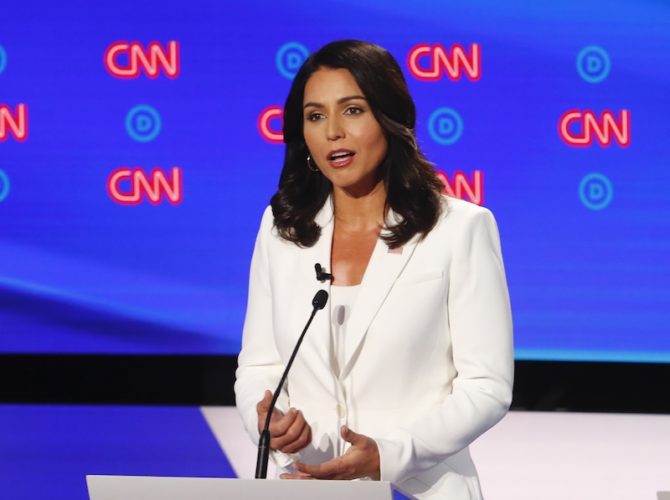 At the end of the day, we may have more than just a good economy and peace and prosperity to thank for getting Trump re-elected.  Seems the Democratic National Committee wants Trump elected also. At the very least, they are handing Trump a rather nice gift. Seems the DNC is banning Congresswoman Tulsi Gabbard from participating in the 3rd candidate forum.

But Tulsi did something unforgivable to the powers that be in the DNC.  She opened up and showed to the entire world what a major league fraud that Kamala Harris was.  And the DNC and the money people could not handle this â€“ so they have banned Tulsi from participating in the next forum.

Here is a video of the exchange, note that Kamala Harris looked out of place and note her body language during Tulsi Gabbardâ€™s filleting of Senator Harris:  https://www.youtube.com/watch?v=o1-CRrMDSLs

Note Kamala Harris at the :38 second mark.  And again at the :47 mark when Gabbard accused her of knowingly putting an innocent man on death row.  And note Senator Harrisâ€™s reply starting at the 1:06 mark. Harris was owned by Rep. Gabbard. Note Harrisâ€™ body language at the 1:59 mark.     But instead of allowing a competent debater like Gabbard to be on the stage again, the powers that be at the DNC will not allow Gabbard to show her talents to a large group of Democratic activists.  There are many times where you can tell from Senator Harris that she knows Gabbard owns her in this exchange. Go to the 2:13 mark of the video.

I am not a supporter of Gabbard or any of the Democrats currently in the field.  I am a proud Trump supporter and will remain one as long as Trump keeps working on making our country a great and good nation once again.  Most likely Trump will win in 2020. But Gabbard, if she could have caught some fire and a few breaks, would have been a tough nominee to be on the stage with.  Gabbard is a radical leftist, but like Obama, she does not come across as one to a large part of the population where elections are usually fought and won. Where potential nominees wear their nuttiness on their sleeves, Gabbard is good at hiding hers.

Gabbard has guts.  Sheâ€™s currently suing Google for manipulating how searches of the name Tulsi Gabbard are done.  I donâ€™t agree with a thing that comes out of her mouth. But I admire her for taking on Google.

For the record, losers like Beto Oâ€™Rourke, Marianne Williamson, and Andrew Yang (he who wants to give everyone $12,000 per year in free cash, not understanding that we are the ones paying for this â€œgiftâ€) are all allowed in the 3rd debate.  However Tulsi Gabbard â€“ the only one of them with any talent, is not.

Gabbardâ€™s ability to express a viewpoint without offending voters is something that Iâ€™d want â€“ if I were Perez of the DNC (Tom Perez is the DNC Chair â€“ and another radical leftist).  But the money people backing Harris wonâ€™t allow for anyone who shows up their anointed candidate. So the Democrats would rather lose an election than have the possibility of someone tough like Gabbard as their nominee.

So thanks Chairman Tom Perez of taking out one of your rising stars, so that a non- entity like Kamala Harris has a better chance of being the nominee.  Because if Senator Harris cannot stand up to Gabbard, how will she stand up to Donald Trump?

DNC Does Everything it Can Do to Help Trump Win in 2020 was last modified: August 24th, 2019 by John Massoud