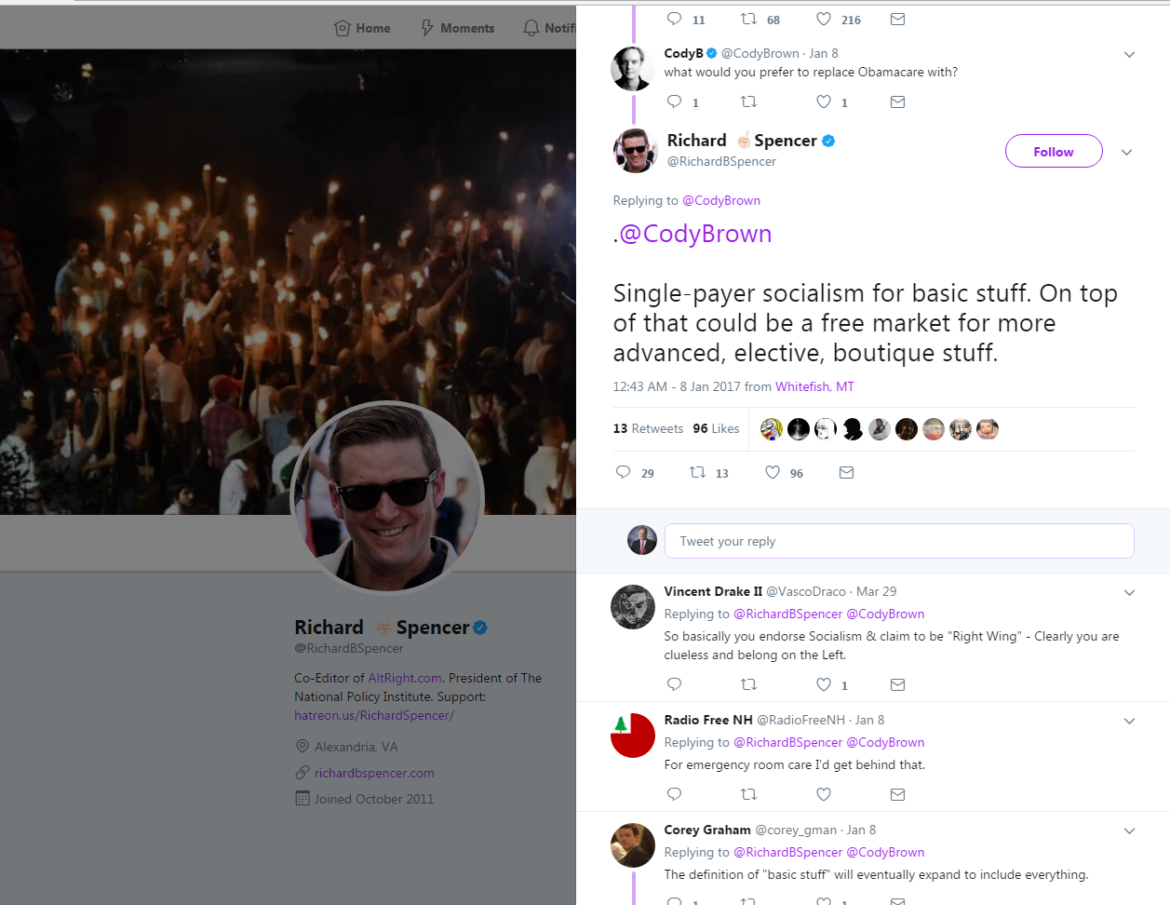 Do not call the “alt right” conservative

First off, no matter what your politics are, the events which recently occurred in Charlottesville are beyond tragic.  They strike at the heart of our Republic and our democracy.  Namely the right of every individual to gather to protest peacefully.  Ever since the enactment of the Stamp Act in the 1760’s, Americans have been demonstrating freely.  Sometimes respectfully, sometimes not so much.  However our American experiment is teetering on the edge, and that is because people have forgotten how to disagree, or more aptly, able to agree to disagree.  And because people at times do not understand who their enemy really is.

Being a Tea Party supporter, and a known Republican, I always hear about how racist my party is.  Something I’ve been listening to since the early 1980’s and I was a foot soldier doing get out the vote calls (GOTV) for Ronald Reagan.  This is a charge which has been leveled at us ever since the 1960’s.  We are partly to blame – as we have never done a good job of minority outreach.  But what is most concerning is the comparison to the “alt right” of Richard Spencer and Tea Party conservatives.  So let me put that ridiculous idea to rest:

Richard Spencer, the head of what he calls the “alt right” is at heart a Progressive socialist and not a conservative or anyone who would be welcome in the Tea Party.  Why do I say this?  Simple.  If you go to Richard Spencer’s Twitter feed, Mr. Spencer, the supposed “conservative” calls for “single payer socialism for basic stuff.   On top of that could be a free market for more advanced elective, boutique stuff”.   (January 8 2017 12:43 am)     No Republican, no conservative, and no Tea Party supporter would ever sanction such a ridiculous anti free market idea.  Contrary to some propaganda, the Tea Party was not born in April 2009 to give us “free stuff”, the term TEA stood for Taxed Enough Already” and was used by a CNBC broadcaster to get people to go out on April 15 2009 to protest higher taxes and too much government spending.  Mr. Spencer’s words “single payer socialism for basic stuff” violates the heart of what the Tea Party was born of.  The Tea Party wasn’t born to give everyone “free stuff”.  The Tea Party was born to get us back to our roots of limited government, and economic opportunity for all.  We don’t have a right to be happy.  We have a right to the pursuit of happiness.

Republicans since Ronald Reagan have been preaching free market economics and free market principles.  We have not been preaching “free stuff”.  The concept of “free stuff” comes from the Occupy Wall Street crowd of 2012, who expected the government to give them I Phones or other technology for free, and who despise all the great joys that economic freedom has given to us.   And we get this economic opportunity from free markets, not from having the government provide to us “single payer socialism for basic stuff”.   According to Mr. Spencer, basic stuff is different things to different people.  For a person questioning their own gender, “basic stuff” could be the full sex change operation.  For a self professed gun nut like me, “basic stuff” would be a .44 magnum.  For others, “basic stuff” could be clothes and food.  See where this is going?  You now have the head of the “alt right” calling for people to have whatever they want be given to them by the government.  This is not a conservative.  This is a radical liberal – more radical than most modern Democrats.  This man and his followers are not Republicans.  To the contrary, they are left wing radicals.

For all the talk about Charlottesville being about Nazi supremacy and the remnants of the KKK, the fact is there were many rioters that day were black nationalists who espouse racism against whites and all non African Americans.  This weekend’s events occurred because of the stupidity of the civil authorities to not be able to see that allowing white nationalist terrorists and a group of people who honestly have been convinced of their own moral superiority that they honestly think that anyone who disagrees with them must be a racist, and that only whites can be racist.   Forgetting conveniently that not only whites can be racists, but black Americans can be racist as well.

Whether the radical left likes it or not, they must accept the fact that the Black Lives Matter crowd and the Alt right under Mr. Spencer are opposite sides of the coin.  Neo Nazi’s and the BLM share a similar economic message (free basic stuff) and likely agree on many other things, the main disagreement among them being which race is superior.  Aka they both likely believe in some form of eugenics.  That’s the antithesis of Republicanism which teaches that all life is sacred and that all lives matter.

Our country was founded on the idea that ALL are created equal.  We didn’t practice it well at first, and we still don’t get it 100% correct to this day.   But we try.   People can agree to disagree on pretty much every topic and we must remember that fundamental in this country is a right to disagree.    But it is high time that the public accepts the fact that the alt right Neo Nazi movement is really an offshoot of the modern Progressive movement.

Do not call the “alt right” conservative was last modified: August 15th, 2017 by John Massoud

Well if Richard Spencer wants government supported healthcare that puts him in league with many elected Republicans and democrats.

The “alt-right” etymology has never been clear to me, and I read at least ten different “alt-right” articles about a year ago, trying to discover where the “alt-right” term originated. The best I found last year was a lengthy article written by Milo Yiannopolis, but even that was disputed by others claiming different origins.

Regardless of where the term came from, it’s been totally corrupted by the media to simply mean racist bigotry now. That has nothing to do with Republicans, conservatism, the TEA party, or any other faction of the right. Now it’s just a media device to attach racism to the right, in the same way the media likes to associate Nazism with the right, despite it’s clear leftist origin in Germany, and the way the media attempts to attach slavery to the right, despite it’s clear support by Southern Democrats, and the opposition of Republicans like Lincoln (spare me the revisionist history of how all the Democrat racists supposedly switched to the party of Lincoln to become Republicans). So yes, let Richard Spencer and all those proud racists keep the “alt-right” term, because that has nothing to do with the Republican right in American politics.

your idiotic attempt to connect democrats today to slavery proves my point about you. Despite the origins of the GOP or Democrats or Nazis, the only thing that matters is what each group is about today. The GOP and the Dems do not stand for what they did 100 years ago.

The term alt-right refers to the radical right, those like you who think that anything non-white Christian is anti-america

I’ve never said one disparaging thing about non-white or non-Christian people, ever. You don’t have a clue, and can’t seem to make an argument without throwing insults. Try again.

You can’t distance yourself from you long history of posting here. And you should not hide who you are. Celebrate yourself

Just as I thought. You don’t know how to make an argument. I knew you wouldn’t be able to back up your ridiculous charge with even one example because it is totally false. I despise identity politics and I would never justify any political position on the basis of race or religion. The worst charge I’ve ever made about anyone else is calling them a Democrat.

I think Dr Swain may have the most intelligent understanding of what it happening today than anyone else I’ve heard from the left.
https://youtu.be/y7zWQmIAotg

Oh really- the democrats want to keep poor black families on the liberal plantation – downtrodden and dependent on the government – kind of like slavery.

Spencer is a pro-White activist bordering on Nazism, which is outrageous, since the Nazis initiated the greatest case of fratricide ever among the white peoples of Europe. However, some of his points about the anti-White Left are very valid and spot on.

There are obviously leftist, collectivist elements in the Alt-Right, aimed at the equality of all whites, and within their collective, members of the Alt Right yearn for an order that has some forms of leftism. But the core of the Alt Right, the preservation of the white race, cannot by any stretch of the imagination be called leftist.

As the late great Lawrence Auster wrote, “On the right, traditional conservatives have believed in “larger wholes”—the realities of nature, society, and God—of race, culture, and religion—that make us what we are. They believe in natural and spiritual hierarchies that are implied in these larger wholes.” Therefore, the Alt Right is an extreme (by today’s PC standards) form of rightism by taking the biological reality of the white European people and making it into the source of all moral and spiritual values, an entity to be left alone, and having the right to exist only among itself.

AS we keep saying

IT IS VITAL to state and local economies that people WORK rather than be incarcerated, or out of work because businesses won’t hire ex-incarcerated

People on both sides are wondering where the cops went. Are the cops now going to interdict crimes in progress based on a political decision instead of statute?

Yes, that’s exactly what they’re going to do.

What happened in C’ville is going to be used as a template by every other city.

They can’t outright deny a permit for a or protest/march/etc based on politics. So they order the police to stand down and wait for things to turn violent. Then they can shut down the event without making it look like they’re playing favorites.

You can bet the cops didn’t choose to stand down. It’s totally out of character to stand back and watch mayhem without trying to stop it. They were undoubtedly instructed to stay back by the mayor, the governor, or both; just as was done in Baltimore and many other cities, with similar disastrous results.

If that is true, would any of them have the courage to speak out and say they were told to stand down?

I suspect that those involved don’t look at it that way.

Between totalitarian supremacists as far as I am concerned. The antifa and the neonazi are mirror images of each other. Trump was right in condemning both for the violence.

And how they may look at the situation does not matter. Facts are stubborn things