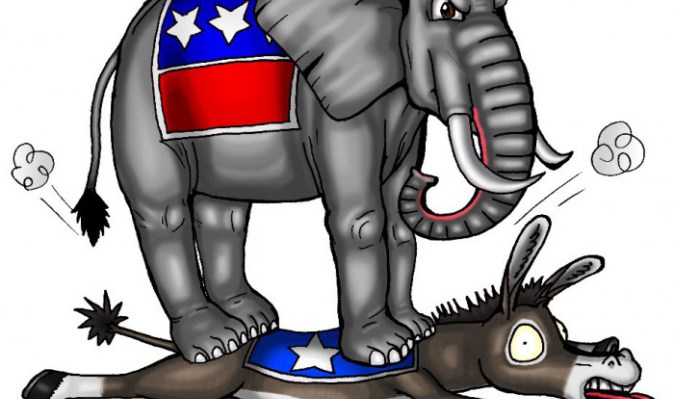 The SUVGOP movement grew out of the establishment Republicans who were running the Fairfax County Republican Committee.  Never forget that Fairfax County is bigger than 8 or 9 entire States. Republican voters chose conservative Tim Hannigan over what is now the SUV movement.  There is a sharp dispute about what happened after that.

The SUVGOP has created excellent public relations materials.  Their website is awesome. They have a series of appealing breakfast sessions.  They issue reports that are graphically appealing and wonderfully filled with bullet points.  (My friend Christine O’Donnell would strongly approve in the concise points made.) They run and release regular podcasts, much like Jim Parmelee had been doing previously at the Northern Virginia Republican PAC.

To put a fine point on it, the SUVGOP’s public presentations now are 100 times better than what the same people were doing earlier with the Fairfax County Republican Committee when they were running FCRC.   Perhaps we should always leave room for growth and improvement. We might hope that all of the GOP units can improve to that level of quality. We might hope that such achievements will continue without pause.

While the focus on suburban voters is vague, such that you might project onto the ink blot whatever you think it should mean, the core concept is clearly that Republicans in Virginia are losing voters in suburbia.

For more than 55 years, liberals within the Republican Party have demanded as a self-evident truth that conservative Republicans cannot win elections, and that it is self-evidently true that we have to become a pale echo of increasing Left-wing Democrats.

It has been 54 years since Phyllis Schlafly published the book  A CHOICE NOT AN ECHO in 1964.  Already in 1964, the civil war between Rockefeller Republicans who wanted the Republican Party to be a pale echo of the Democrats was raging and the Goldwater grassroots.  1964. This is not new. To view this as a new chasm within the Party of Lincoln is both unhelpful and completely false.

This is the core of what has been ripping the GOP apart since the great battle in 1964.  Each faction marches to war under banners proclaiming “truths” that have never been proven true in the real world.  These raging opinions burn in the breasts of various Republican factions even though there is no empirical evidence to back up those opinions.

What really burns my toast is the dishonesty of some in trying to pin this philosophical divide only upon only one individual alone each election cycle, one after another.  They try to blame one conservative at a time, as if we don’t remember that they said the exact same things about the last conservative who threatened to actually win. Same script.  Just cross out the name and write in the new name for this year.

We will never forget nor forgive the establishment Republicans who in 1994 sabotaged the Republican nominee for U.S. Senate Oliver North by running Marshall Coleman as an independent.  Still waiting for the apologies. Don’t try to tell us that this just started when Donald Trump decided to run in 2015.

Former RPV Chair John Whitbeck at a breakout session, which I witnessed and Mark Sells confirmed to others, insisted with some bitterness that we cannot win the suburbs as long as Donald Trump is President and that (pretty much the only reason) we lost in 2019 is because Trump is President.  Virginia Republicans lost not because of 20 years of smug satisfaction with the status quo but because Donald Trump while a private citizen called Rosie O’Donnell a fat pig.

In this session on lessons learned from our 2019 candidates, former Chair Whitbeck gave the clear implication that there are no solutions and no way forward until we get rid of all controversial Republicans.   But what is the effect of establishment Republicans constantly telling the public that other Republicans are bad? If some Republicans keep announcing that most Republicans are bad, sooner or later might some of the voters start to believe it?

Are Republicans struggling because Donald Trump and Rosie O’Donnell had a very public feud, largely as a public relations gimmick?  Or because for decades there are always Republicans eager to denounce other Republicans to any television camera or microphone or print reporter they can find?

Most of my political life I have sought to get people to think, to question assumptions, and open our minds.  But in reality, I am much more interested in and oriented towards problem solving. I would love to see unity.

I have been involved in this dispute within the Republican party as a conservative activist since I campaigned for the Republican nominee for U.S. Senate from Virginia Oliver North in 1994 with my friend Mark Merritt, served as campaign manager for Christine O’Donnell in her 2008 campaign against Joe Biden, and since I was co-Chair of the Reagan / Bush 1984 campaign for the massive University of Florida campus by the appointment of Tony Ring.   (I fear that the official record will show only Tony as Chairman. But ask Clark Bowers or Stockton Reeves.)

We have fought this pointless civil war in terms of whether a candidate is a 100% pure conservative.    I have learned that that is not the issue.

Are we losing suburban votes?  Of course. But aren’t we losing votes across the board?  I say we need a Republican message that we can present state-wide.  And begging the Democrat party to let us merge with them is not my way.