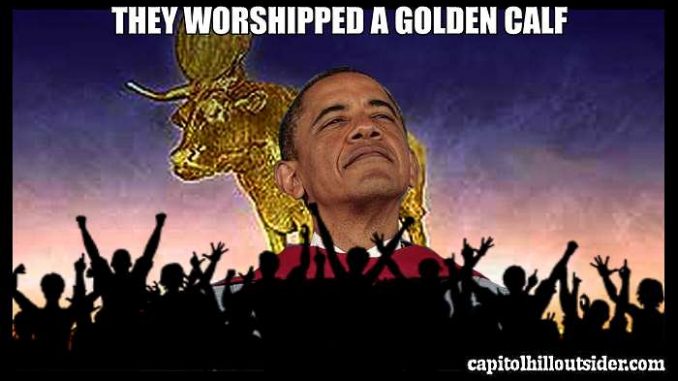 Do voters want results, or an idol ?

The Golden Calf in American politics

I was inspired to write this blog post after a weekend dealing with “idolatry” – watching the Oscars and reading in synagogue about the Golden Calf in Exodus.

The worship of idols (including graven images) is the  No. 1 no-no in monotheist religions, starting with  Judaism.  As the Torah states (Exodus 32:20), Moses “took the calf they had made, burned it in fire, ground it to fine powder, scattered [it] upon the surface of the water, and gave [it to] the children of Israel to drink.” In Exodus 32.35, it reads :”Then the Lord struck the people with a plague, because they had made the calf that Aaron had made.”

Well, idolatry didn’t stop there, and has been with us to this very day.

Idol worship is defined in an online dictionary as “the worship of an “idol“, also known as a cult image, in the form of a physical image, such as a statue or icon.”   But people are drawn to human idols, too — actors, sports figures, and of course, political leaders.

Despite playing down the anti-Trump politics at the Oscars, the Hollywood idols saw their ratings drop about 20%.  Good!

But liberals are by and large secular and I believe more drawn to idol worship than folks of faith.  However, when it comes to President Trump and the GOP leaders in Congress, the “professional class” in this country seems more interested in a soothsayer (i.e. Obama) than results leading to a better livelihood, security and freedoms for all Americans.

Despite eight years in office and little to show for it, Barack Obama is more popular in polls than Trump.  Millions would vote him back in, if they could. I believe he is an idol.

I attended a Rutgers alumni event recently and was besieged by friends, all New Jersey residents, and professionals, dumping all over Trump and the tax cut (they feel the limit on the state income tax deduction is going to screw them).  But when I engaged with them, it seemed many of my friends dislike what Trump says and Tweets vs. what he is trying to achieve.

I am not comparting Trump to Moses, but I feel Moses, Aaron, Joshua, David, Solomon, plus Jesus, the Apostles and Paul, were probably not the most politically savvy and certainly had their foibles, but they were trying to achieve results for humanity.  It is a shame that many voters cannot distinguish results from rhetoric.

But Republicans have their idols, too.  Republicans idolize Ronald Reagan and want to impose a “Reagan Litmus Test” to every candidate we nominate, forgetting Reagan raised taxes in some areas, expanded disability entitlements and did little to reign in illegal immigration or abortion.

I personally did not sign on with Trump from the get-go of the 2016 campaign because of his Tweets and plain talk, and I don’t idolize him. Rather I saw Trump as a results-oriented business leader who could work both sides of the aisle to achieve great things.  And, we are seeing these results.

But results are a funny thing.  Politicians who work for results get beat up by those who don’t want that result.  It takes a lot of work, leading to gray hair and sleepless nights, to get a majority vote for a piece of legislation. And then, a section of the electorate hate you.  This is why so many members of Congress spend more time talking to the TV cameras and making speeches than trying to pass legislation. Forget about trying to cut spending.

I ran all my four of my winning campaigns for Leesburg Town Council and the Loudoun Board of Supervisors on various slogans dealing with results – i.e., “Common Sense Solutions for Leesburg” and “Real Leadership with Results.” Except when I was the top vote getter among seven candidates in 2016’s Council elections, all my elections were close, often just edging out candidates who achieved very little.  Our current Leesburg Supervisor, a Democrat, Kristen Umstattd, has held office as a councilmember and mayor in town since 1992 and I cannot think of many things she initiated, but she smiles, is funny and engaging and she wins elections by big majorities.

Trump is not so loveable and warm, and the national GOP in Congress may soon find out that at least in some constituencies, people really don’t care about results.  This fall, we are likely to see droves of middle and upper middle class voters (largely liberals and independents) flocking to the polls to make another “protest vote” against Trump like they did in Virginia in November.  And in the process, they will be voting out a number of very good Republican leaders in Congress and giving the reigns to the Democrats.

These “professional class” voters, which now fuel Democratic blowouts in statewide races in Virginia, do not seem to care about the tax cut Trump and the GOP gave them, the improved economy and stock market, progress against ISIS and North Korea, and other results.   They already have their homes, jobs and retirement funds. They have no empathy with Midwest steelworkers who are losing their jobs to foreign competition, much like a Norfolk maker of artificial Christmas trees that is going under after 60 years in business Conservatives complain that voters do not think about “Country First” any more – well, that slogan failed McCain and Palin in 2008, didn’t it?

I sincerely hope I am proven wrong about the upcoming mid-term elections and the GOP will retain at least one house of Congress and that Trump will continue on the “MAGA” path.

However, a good quantity of the electorate still yearns for an idol to worship versus kick-tail results.

The idols of the nations are silver and gold, the handiwork of man.

They have ears but do not listen; neither is there any breath in their mouth.

Like them will be those who make them, all who trust in them.