Do You Know Selfies Are OK In Voting Booths?

Yes, you read that correctly. As outrageous as this sounds, the two Democrats on the Virginia State Board of Elections (SBE) voted this past June to approve selfie pictures to be taken inside the voting booth on Election Day. The one Republican on the SBE vehemently objected (SBE is a 3-member board). The sole purpose of Democrats wanting to pass this is so that people can take a selfie picture of themselves with their marked ballot next to their face. And the purpose of that is to provide positive evidence of who they voted for in order to be paid for their vote. Sounds crazy doesn’t it? That’s what I thought until I learned that Democrats have already been doing this exact thing in many other states.

This is absolute lunacy. And it is also against Virginia state law – to make a copy of a marked ballot – but the two Democrats are hoping that no one will notice until it’s too late to take them to court to get this monstrosity reversed.

They claim taking a selfie is your First Amendment right. That is correct, but not inside the polling station to include a marked ballot next to your face. See the picture below that shows a selfie on the left, and a selfie with a marked ballot on the right. 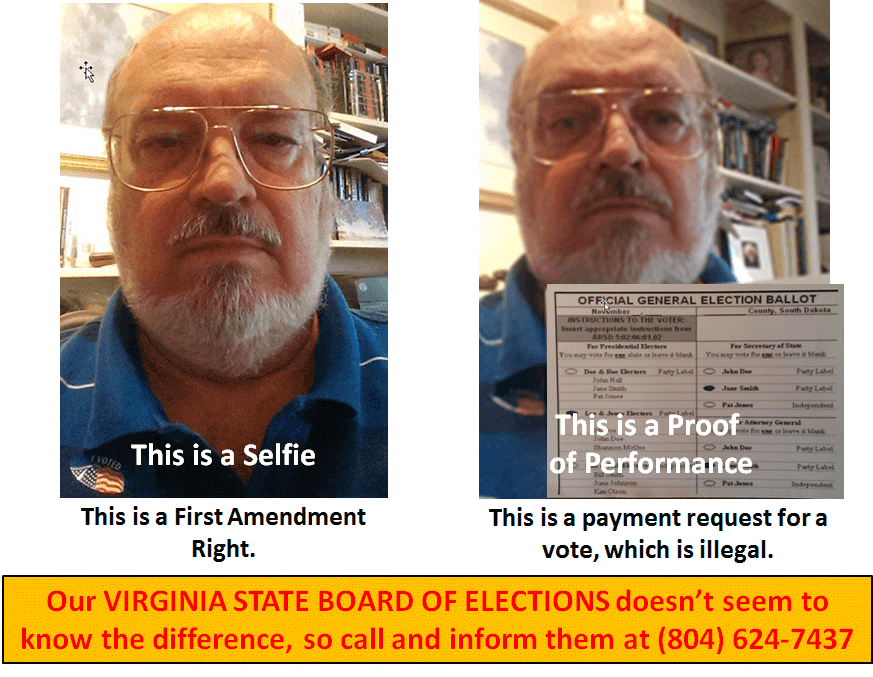 The other head-shaking thing about this is that all smart phones have the ability to easily switch from taking a still picture to taking a video. How would you like to be photographed or video-taped in your polling station? Imagine the mayhem that could ensue with people taking pictures and videos in your voting precinct. This is totally nuts.

You can stop this from happening by contacting the two Democrats on the Virginia State Board of Elections, right now and many times over, until they reverse this terrible ruling. And spread the word on your email lists to get others to do the same.

The names and email addresses of the two Democrats are Mr. James B. Alcorn,[email protected]gov, and Ms. Singleton B. McAllister,[email protected]elections.virginia.gov. The phone numbers for the Virginia State Board of Elections are 804-864-8944 and 804-624-7437.

And please contact your State Senators and Delegates, and anyone else who you know in political authority, to put an end to this idiocy.

Do You Know Selfies Are OK In Voting Booths? was last modified: September 22nd, 2016 by Guest Contributor Howie Lind

I checked the first Amendment and didn’t see a reference to photography, camera nor cell phone. It is certainly not speech. So, how is this a 1st Amendment right?

This receipt for performance is not a selfie. The voter simply takes the cell phone picture to their section 8 housing and shows it to the Democrat Vote Coordinator in the privacy of their home. The coordinator then pays for the vote with a non-traceable gift cart to Wal-mart, Target, etc. This was tested in 2014 in Ohio by the Democrats and it works and is un-provable in court. Don’t think for a minute this will not happen.

The Republicans did this in Mississippi in the last Senate Primary. $15 in unmarked envelops which were hard to control and audit. The gift cards are being purchased with cash by Labor Unions all over the country so their donations won’t show up on FEC reports. Republicans can put their head in the sand if they want, which is exactly what the Democrats are hoping we will do. At least you were warned and not calling the State Board of Elections is tacit approval of vote buying. We should not allow conditions to exist that encourage voter fraud.

I disagree with my friend Mr. Lind. I pointed out a couple years ago how this issue does not fall directly on left-right lines. Photography and even video are the only ways to avoid shenanigans in the polling place.
http://thebullelephant.com/the-perils-of-documenting-your-vote-in-virginia/

I’m sorry but I just don’t see the problem. Unless they are taking too much time e.g. tying up a voting booth, and they’re NOT taking photos of other voters – what’s the harm with a quick selfie? I say this as an Election Officer for many years – if someone takes a quick selfie he’d be done before we could say or do anything. Then what – do we call the police for the VICTIMLESS crime, or perhaps we should tackle him to prevent him leaving; or at least grab and confiscate the criminal phone?

How about it’s just an 18 year old who wants to capture his first vote. What a voter does AFTERWARDS with his selfie is NOBODY else’s business.

So much for Republicans being the party of liberty. I’m on the Dems’ side here, and that’s a rarity. This absurdity would be a gov heavy-handed & kill-joy law.

Connie, You are not alone. Taking photos to be paid to vote is an overblown concern. Problems in the voting booth in the age of electronic voting are real. the prohibition on cameras is unreasonable.

We have a lot of stupid laws on the books already; we shouldn’t add another one – selfies with your own marked ballot. The prohibition on cell phones is to prevent a person from recording someone ELSE there voting. Up until last year, TV crews were allowed to film INSIDE and interview (willing) voters.

Guess we should stop giving away ‘I voted’ stickers too huh.

We try and remind every person as they enter, “No cell phones.” If they forget and we see them on their phone later, we tell them again, and they comply or leave while they’re on the call.

It’d be the same with someone taking a selfie, we’d tell them that’s not allowed and to stop. Guess what – selfies are QUICK – and by the time we told them to stop they’d be done and already putting their phone away.

We EO are there to ensure the integrity of the process and that includes preventing voting fraud. Selfies are harmless and our fixating on that harmless practice takes attention away from the REAL issue.

And another thing, I think that prohibition against cell phones/cameras/video inside the polling place can be problematic. What if a voter sees his machine is rigged – he votes Trump but it comes up Hillary?? Damn right he better whip out his phone and record THAT, huh?! IMO he should record it even before calling the EO over. But too bad – his recording is a crime. Call the police and have him arrested.

Don’t confuse a selfie with a picture of your face including a copy of your ballot, they are two different things.

No limit to the perfidy.

you buried the lead! How od I get paid to vote?