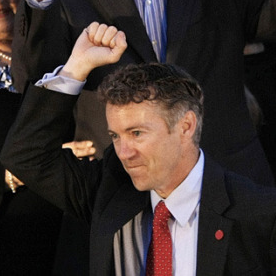 Does the Rand Paul Campaign Have a Death Wish?

In his Presidential run Rand Paul has hired an interesting group of campaign staffers including two well known Virginians. [read_more]As we reported earlier Chris LaCivita will be Paul’s senior advisor. LaCivita has lost more campaigns than he has won, including Ken Cuccinelli’s run for Governor last year. Recently he helped win the re-election of Republican Senator Pat Roberts in the very red state of Kansas.

Paul has also hired media strategist 26 year old Vince Harris whom Bloomberg Politics calls the man who invented the Republican internet. Harris has all of ‘six years of internet experience’. Wow! Quite a resume. Many of us in Loudoun remember the blog he began here, Too Conservative, quite a misnomer since it has been dominated by people who hate Republicans and their candidates. Harris refused to police the blog while it bashed our candidates including Ken Cuccinelli and the soon to be Virginia’s Republican Party Chair John Whitbeck. Vince Harris was/is fine with all of this. Vince Harris worked for Ted Cruz and other winning candidates but also worked for just as many losing candidates in his vast 6 years of experience.

The folks over at the National Journal ask “What’s Behind Rand Paul’s Staffing Strategy“? They seem to think that hiring these young men is a brilliant. Having known the history of Chris LaCivita and Vince Harris in Virginia, I disagree. Seems like a suicide mission to me.

Does the Rand Paul Campaign Have a Death Wish? was last modified: January 22nd, 2015 by Jeanine Martin

I wish some of you folks would wake up and smell the electoral college coffee. Due to the disastrous presidency of Bush II and the influx of third world immigrants, once reliably red states such as Virginia, Colorado, and New Mexico, are now tilting blue. For the past 20 years the Democrats have had a lock on a collection of solid blue states which give them already 220 electoral college votes. Thus, the old reliable conservative standard bearer model is no longer going to work. I like Rand Paul because I think at this point he has greater potential to make inroads into traditional Democratic voting blocs without alienating our base than any of the other of the array of candidates are party now offers.

I would only say you need to make an effort at the political level to sell conservatism to the US voter in an open and clearly stated manner before claiming it no longer works. The national media and Republican party have generally been obstacles to that effort for the past quarter of a century. I don’t believe the reaction of the mid term 2014 elections against the past eight years of liberal progressive legislative governance was a ringing endorsement to these policies or the traditional Democratic voting blocs that have loyally supported them over the years. Should the Republican Party make every effort to bring back into the fold the blue collar and working class constituencies that once formed the base of their party rank and file, before post Reagan party leadership moved to replace them with corporatism rather then main street values, YES of course.
Is Rand Paul uniquely qualified to do this, not in my opinion. So who are these Democratic blocs ( really Obama blocs and there is a meaningful difference there) you are proposing? Single topic social issue activists, youth (under 25), and the large and growing benefit entitlement vote. Should conservatives reach out to these individuals with “conservative solutions”, again of course, but is Rand Paul really capable of prying these individual’s away from the Democratic liberal belief structures with its entitlement model and what is the asking political price to pay? We have better “stuff” then the Democrats. Rand Paul would do the body politic the single biggest favor he could perform by doing the one thing he will never do, run as the libertarian he is on clearly stated and well documented libertarian party principles and see how the chips fall. But like Obama that will never happen we will just get the purposefully designed projection.

Vince Harris runs one of the most innovative and exceptional digital media firms on either side of the aisle. What he does in March half of the firms are trying to emulate by June. Vince is the real deal and six years of experience is more than most people running digital operations for campaigns. It’s a young person’s game and Vince is reigning champ.

Rand could hire Al Sharpton and I’d still vote for him.
Paul-Cruz ’16

The first thing conservatives need to get clear in their heads is that Rand Paul is no conservative. There I said it “Rand bots” spam away. In fact his grasp on core Republican tenets can be very tenuous in many critical areas such as international relations, national defense and capital markets. He is his father’s son at base a libertarian that was successful in skating the edges of many central libertarian positions to gain election to the Senate in Kentucky. I have no real problem with this as many politicians are masters at managing their positions to the base electorate but I believe the picture changes when you start dabbling in presidential politics. At that point it is time to run on who you are not what you want to project and by not doing so he is in fact making a statement on his true opinion of the election viability of potential national libertarian candidates. After all wasn’t it LaCavita who the NRSC shipped to Kansas to convince local Jayhawks what a stand up conservative guy died in the wool establishment Pat Roberts was when Orman had him on the primary ropes? I disagree Chris LaCavita may be the perfect man for the job.

Yes in fact I do. I weigh FAR more heavily their policy statements and stated political positions then some fabricated score that generally relies on a collection of often statistically meaningless floor votes. These rating checks can be very misinforming unless of course your willing to consider Orrin Hatch and Mike Lee both in the same conservative percentile. Rand Paul is no Mike Lee by any measure.

LaCavita is hardly a joke. Here’s his record:

Yes, he was able to help many republicans win in very republican districts. In less Republican campaigns, like Linda McMahon and Allen West, not so much.

Jeanine, you say, “LaCivita has lost more campaigns than he has won, including Ken Cuccinelli’s run for Governor last year.”

This is obviously not true, as I just demonstrated. Every election result is dependent on alot of different factors. Allen West jumped districts and lost. Linda McMahon is a Republican in a blue state and lost. It’s incredulous that you pin these losses on just one factor.

LaCivita is a good operative that wins. Why do you have a vendetta against him?

look at LaCivita’s wins. some of these winners are not conservative enough for Jeanine. & while that is OK because this is her blog, the fact remains that he has won more than he has lost.

Yes, but some of those races ANY republican would have won.

There was proven voter fraud with Allen West. Also the establishment republicans wanted him gone.

I’ve never called LaCivita ‘highly respected” because I know how Virginians feel about him.

LaCivita was his consultant. I’m talking about his campaign manager now on the Stimpson campaign. I seem to remember gushing praise.

This couldn’t possibly be a case of you selectively judging staff based on your support or opposition for a particular candidate, could it?

golly, I’m a Virginian. & I like LaCivita. some of his candidates I don’t like as well as some of his others, but that’s politics

Well said – LaCivita is a joke and should be banned from running campaigns. Why anyone would hire him is beyond me.