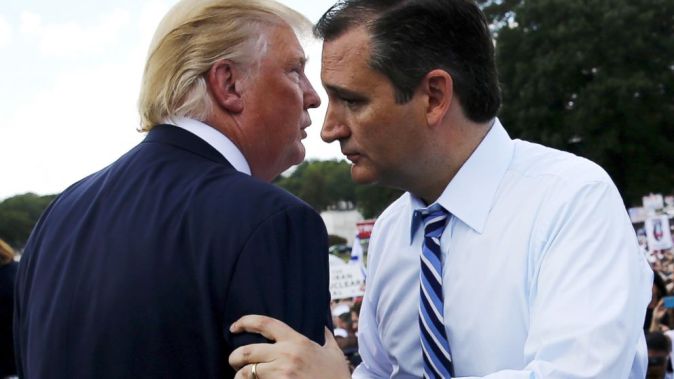 Donald Trump Versus Ted Cruz: A Study in Strategy

Donald Trump, on the other hand, has been the most aggressive in levying personal attacks against other candidates, resulting in the highest unfavorable ratings of any Republican in the field and the best overall numbers in the polls. John Kasich (3rd highest unfavorables) and Rand Paul have run deliberately negative campaigns as well, each struggling to get ahead, despite having natural constituencies within the Republican Party. Governor Christie and Lyndsey Graham have run negative campaigns, but their attacks have been directly primarily, if not solely, against Senator Rand Paul.

Trump aside (who attracts people who love his bravado) – this strategy has failed for every other candidate.

Jeb Bush (2nd highest unfavorables) has attacked Donald Trump repeatedly, but this seems more like self-defense and desperation than mean-spiritedness, and I doubt that Jeb! has taken any loses on account of his jabs. In fact, on occasion, I’ve appreciated them. Nonetheless, Jeb’s personal attacks on Donald Trump have failed to help in him the polls.

Rick Santorum has reserved most of his attacks for Senator Ted Cruz, who he seems to hate for some unexplainable reason, but has been relatively nice to the other candidates. Mike Huckabee ran a largely positive campaign, refusing to attack Trump and quickly backing up Senator Cruz against a common enemy (the media), but this primary cycle has been hard on candidates running for a second time. Ben Carson has been nice and forgettable.

The reason our candidates should not personally attack each other is because eventually one of them will be the nominee. I cannot imagine that any supporter of Jeb Bush, Carly Fiorina, or Marco Rubio would ever vote for Trump in a general election. They are all much too disgusted with his attacks on their favorite candidates.

Rand Paul supporters, certainly, will never vote for Donald Trump for any reason. Satan himself could rise up through the earth, declare his intention to slaughter all of mankind, and he would still be less despised by the Rand Paul people after Trump suggested that someone in Kentucky should primary the Senator in 2016. And I don’t blame them!

There should have been no reason why these Republicans ought to have gone negative so quickly. Fox News and CNN could smell blood in the air and they gave these Republican Candidates every opportunity to skin one another alive.

For that, he was punished with hardly any time to speak during the first two debates. That wasn’t a problem for the Senator from Texas, as his fellow candidates ruined one another’s reputations and made more enemies than friends within the party. Ted Cruz is now polling second in almost every poll, in nearly every State that matters. There is some opposition to the Senator, especially from the Republican Establishment (Bush, Kasich, Christie crowds), the far-right wing (the Santorum Crowd), and the libertarian wing (primarily Rand Paul voters who are angry that Ted Cruz, by running a quality campaign, stole all the money, endorsements, and volunteers they thought were theirs).

Despite all of that, he’s “everyone’s” second favorite. His positive message has earned him one of the strongest volunteer and organizational structures of any of the Republican Nominees. He’s raising more money than anyone. He’s getting more endorsements than anyone and fewer Republicans, when asked, say that they would not support him than any other candidate. Rubio’s smear campaign against Cruz on immigration has destroyed much of the good will Rubio previously enjoyed.

When Ted Cruz wins the nomination, he will have won it without creating enemies he didn’t already have. If Donald Trump wins the nomination, the Republican Party will likely never recover. By the time Donald Trump is done mocking, ridiculing, insulting, and making fun of everyone else’s favorite candidate, only the die-hard, celebrity-enamored Trump fans will bother showing up to vote.

I wonder how Cruz will tackle immigration reform or enforcement ?
To be able to use the word ” comprehensive ” properly in the issue of immigration reform would mean that it would address the shadows where they and those conspiring with them hide.
We know that Virginia Republicans lack the moral foritude to clean up thier own state http://watchdog.org/202012/subcontractors-shadow-economy- 200 violations and not one investagation or prosecution { not one violator had a VEC account required by VECA } and we also know of the back room deals made in Texas { who Senator Cruz represents } to still allow illegal aliens to circumnavigate employee misclassification laws , 1099 1 illegal alien and he employees many more under the same 1099.
C’mon man Werrell just wrote a good piece of the possibility of the Va. Republican Majority being just as lame as the ” chuck and duck ” Houston Oilers { I believe that Republicans are already blowing that halftime lead }.
You will not hear TEA Parties in Virginia talk of this, shamefulllllllllllll.
I wonder what VA. Republicans and the TEA Party think of { D } Governor McAuliffe’s Task Force findings and recourse of the issue which commands legislation?
Trump is the ” only honest ” choice.
American Jobs
Defending the
American Dream
Trump in 2016

Post a link, I’d love to read it and maybe it will shed light — but from your post, and your argument above, I’m not sure it enlightened you.

I think Ted is great, he’s no doubt the most conservative Senator and the people of Texas should be very proud.

But he was born in Calgary, Alberta, Canada and his Father was not a US Citizen at the time of his birth. He is not eligible to be elected President of these United States.

The Dems (Alan Grayson) are already rumbling about this. As soon as the establishment can do something about Donald Trump, they will probably use that against Rubio and Cruz.

I’m really, really sorry that this is his heritage, but either the Constitution is worth defending, or our favorite conservative is worth setting it aside … Not for me.

Sorry Pal, read the blogs, and the links.

If you are citing 1790 for your definition, note the repeal and correction in 1795. According to your own post and citations, Ted is a US Citizen, but not a Natural Born Citizen.

I like your commitment, but its ill advised. Here’s some additional education for you:

“Oops! That page can’t be found.

It looks like nothing was found at this location. Maybe try one of the links below or a search?”

Eric, how about you explain to me your position in your words? You posted something claiming that the term was defined and then it was repealed with the wording changed to make my point. Google is your friend on this. (Maybe like Justia?)

Edited for your reading (listening) pleasure. I’ll let the lawyer ‘splain it to you…he does a far better job than I ever would.

‘Your wrong because I think he said so’ really doesn’t count in commenting and debate. I think the term is ‘appeal to authority’

You posted and cited 1790 acts as your reason as to what constituted an NBC — I pointed out 1795 acts repealed 1790 and clarified/corrected your definition. Please tell me if that is not the case.

I can post the transcript, if that would help. I’m not appealing to authority. I’m using that authority’s argument to supplant my own. Huge difference.

Post a link, I’d love to read it and maybe it will shed light — but from your post, and your argument above, I’m not sure it enlightened you.

Nope, you do not all three to be a US Citizen at birth. Sorry. If every anchor baby needed all three, none of them would be legal citizens.

I hope you’re not arguing that Ted Cruz was a Canadian anchor baby! (Although I think there was some fairly recent news that he did renounce or would not execute his Canadian citizen option)

Evidently over and over again isn’t enough.

I’ve seen it being addressed, and then I see spin and rhetoric and terms thrown around and each time I try to figure out the truth, back to spin. I think this blog has some really wise people, and some not so much. Yet the responses I have received have me thinking that most folks are not quite aware of how this works.

My understanding of Natural Born Citizen is that it is a type of citizen that one does not make – one is an NBC, not made into one. The Constitution makes this clear with how they define the requirements for the President and Congress.

I don’t know that his mom was a natural born citizen and don’t care because she is not running for president — but I believe she was a US Citizen at the time of his birth. — this is one of the things that has made him a US Citizen.

John McCain was not a NBC, because he was born in Colombia. He is a US Citizen and eligible to be a Senator , as are Rubio and Cruz.

John McCain was born in Panama AND the Constitution isn’t as clear as you state. There is definitely some ambiguity. Cruz is a US citizen. He was also a Canadian citizen and revoked that this year I believe.

Thanks for that, yes JSM was born in Colón, Panama and is also a US Citizen.

The Constitution is clear about requirements for Pres, House, and Sen. The ambiguity surrounding NBC for President not so much. (Really, only 2 citizen options and one doesn’t count that much anymore – go look)

I don’t see any ambiguity about McCain, Cruz, Rubio, Jindal all being US Citizens.

In a nutshell, all NBC’s are US Citizens, but not all US Citizens are NBC’s.

I think that Ted Cruz’ US Citizenship was never in doubt and the Canadian citizenship was automatic (cuz he was born there) and not recognized by the US. Ted doesn’t have to prove anything to me or anyone else that he could be anything other than all American.

Correction, McCain was born in Colon, Panama — I will correct when I figure out how to correct posts.

When/were was it proven that his mother was natural born? That was the sticking point.