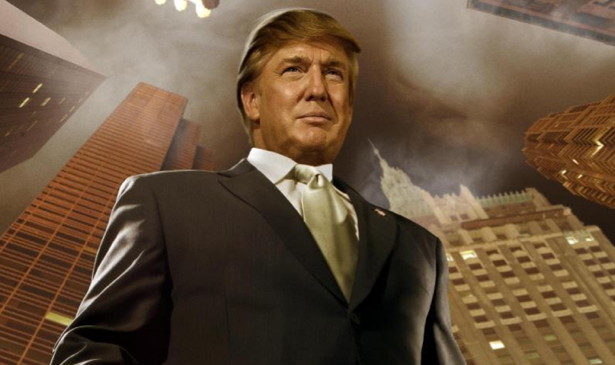 Donald Trump really doesn’t care about the old world order and the ancient logics of the Cold War generation (his generation). He’s not afraid of making waves, of placing his finger on the fulcrum of order and flicking it a bit. Trump projects strength, even while the world interprets that strength as stupidity. This is exactly what took place in the early 1980s. Everyone was scared to death of the strength Reagan projected because they didn’t believe they could live up to it, just as Americans today, frightened of Russia, frightened of China, frightened of radical Islamic terrorism, feel they cannot live up to the strength Trump projects.

There was a time, when men placed a great deal of stock in strength, honor, pride, vigor, and daring. When did we become so soft, so easily paranoiac in the face of real and imagined danger? We do not yet know how Trump intends to exercise his foreign policy. Thus far, all he’s done is demonstrate that he doesn’t care about “the rules”. He called Taiwan. He’s said that if Russia is expanding nuclear capabilities, that we’ll expand and outpace their them. He’s projecting strength. He’s advertising to the world that they ought not sleep so easily or confidently when he takes his seat in the Oval Office. He will not be predictable or controlled by fear.

We act as if we’re afraid of war, afraid of offending evil men. I hate war. It is expensive. It costs the lives of our bravest men and women. I hate war, because it is the ultimate infringement of innocent men and women’s right to self-preservation. I’m not afraid of it though. I’m not so naive as to believe that there will ever be a time when the world is not at war with itself. I also do not believe that there is a problem with projecting strength. After all, we aren’t as weak as we seem to imagine.

If you are frightened by the opinions of world leaders, then that is a problem. I admit, I’m worried that Trump’s reckless ideas on the economy could lead to depression and war, but I have faith in his advisers. We’ve been told for the last eight years that if we are strong, terrible things will happen. I couldn’t disagree more. If we project strength, we improve our negotiating position. We increase the likelihood that our State Department will succeed in their ventures. World leaders are more likely, not less, to work side by side with America when she is strong and acting like it. For the last eight years, we’ve been strong, but have acted weak, and look at what that has cost us in the Middle East.

No, I can agree with criticism of Donald Trump when it comes to his economics and his social rhetoric, but when he is projecting our strength to the rest of the world, that doesn’t bother me one bit. I say, “Thank you, President Trump.” A strong US Foreign Policy will save lives and reduce the incidence of skirmishes and war. Foreign actors will behave better and more cautiously. Our allies will be more likely to fall under our leadership when we are leading by strength, rather than leading from behind (as we have done for the last eight years).

Do not be afraid. There is nothing immoral about projecting strength. We must simply demand the virtue of our elected. A great and virtuous power could do a great deal of good in this world. Let our President be strong and let us pray that God leads him toward virtuous decisions and moral ends. Fear is a cancer that eats away at the strength of our resolve and constitution. Nothing frightens me as much as leaders who appear afraid to offend, afraid to act, afraid to speak truth to the rest of the world, and afraid to stick up for the rights and privilege of the United States of America.

An indication that the attempted boycott of the inaugural celebration has failed big-time is the public’s reaction to the confirming of 16-year-old classical crossover singer Jackie Evancho’s performance of the “The Star Spangled Banner” at Trump’s inauguration. sales of the singer’s albums have gone through the roof

Haha, not really your A list entertainer. Does seem appropriate that she would come from a staged reality show.

Excellent article. Think it is one of if not the best of 2016!

A disgraced campaign operative for Kentucky senators Mitch McConnell and Rand Paul may have violated his probation by meeting in New York with undercover reporters offering to make illegal donations to Donald Trump.

Jesse Benton, who was sentenced in September to two years of probation for buying a senator’s endorsement while working for Ron Paul’s 2012 presidential campaign, told the journalists Oct. 13 that he could funnel $2 million toward a pro-Trump PAC through his public affairs company to hide its origins, reported the Associated Press.

The reporters from the Telegraph newspaper were posing as associates of a Chinese benefactor, and foreign nationals are prohibited by law from donating to U.S. federal elections.

Hmmmm — funnel donations from China to a Republican candidate?

If there were no lying, scumbag, POS hypocrites, there would be no Republican Party.

–so much for the strength of Trump– why?– because I agree and time will prove us both right or wrong.
but– economically ?– Oppose many PUBLIC? PRIVATE agendas, because, the public normally finds it’s self holding the bag of bills, with the rich getting richer on taxpayers taxes.
what worries you about Trump’s economic projections?— unattainable?—too optimistic
or not within the capacity of our government to influence ?
educate me if you please– I’m open to suggestions and welcome others opinion

Welcome to Trump’s New World Order in which criticism of the “new King” is not allowed.

Kellyanne Conway warns Trump’s critics to “be careful” what they say about him.

Memo to Kellyanne: Stick it up your ass.

Idk man, I think Trump might really go after people that disagree with him publically if they do it in a mean way.

matter how, when, or where they disagree. He is a sixth-grade schoolyard bully.

Here’s an example of his bullying.

Trump is in for a rough ride . . . he’s likely to blow a cork when the real criticism starts.

All praise to Donald Trump. All other countries tremble like willow in the western wind. USA #1!

Putin, has shown the world once again how to deal with the middle-east. You don’t do it with no USA “surgical strike”, media satisfying, BS.

On the other hand, if we do it like Putin does it in the middle-east, a politician may have a problem come election time.

Wouldn’t have been a mess had Obama not pulled out early. He spent 8 years diminishing our power and posture around the world, while appeasing nations hostile to the civilized world. Had he had the spine to see it through ISIS wouldn’t have spread like wild fire across the globe. Keep crying about bush though. The ultraleftist loves a good scapegoat strawman. He hasn’t been on office for 8 years yet the world is steadily burning, Obama’s policies didn’t help.

That’s just it. It was George Bush 43′ who signed the agreement for the US to leave Iraq, not Obama. Iraq would not renew the status of forces agreement. Hate radio has been lying for years about this, fake news of their’s. Do your homework, it is true. The media are nothing but liars.

There you go again, RR III — confusing the swamp critters with facts. Don’t you know by now they get mean and confused when confronted by facts?

“Only thing we have to fear is fear itself”, very applicable.

Now…why can’t President Donald J. Trump have the military perform at his inauguration?

Maybe because the military can’t even afford to turn on the heat in their buildings? Maybe the military is all Democratic and won’t be forced to attend a Trump gala?