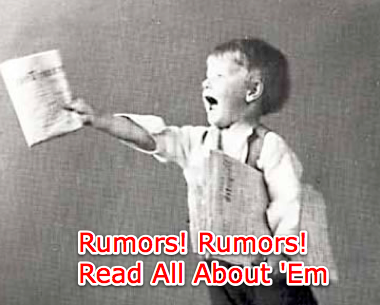 Don’t Believe Everything You Read, Ken Cuccinelli Supports a Convention in 2016

Having spoken today with three people who are very close to Ken Cuccinelli, I can say with 100% certainty that former candidate for Governor, Ken Cuccinelli, supports a convention in 2016.[read_more]

Cuccinelli is supporting the conservatives at Saturday’s State Central Committee meeting in their quest for a convention next year. Ken is surprised that anyone would start a rumor that he would ever support a primary.

Yesterday Bearingdrift.com perpetuated this absurd rumor,Â telling readers that Ken Cuccinelli is supporting a primary in 2016.Â  I expected so much more from such a well established, well respected, conservative blog. When blogs perpetuate erroneous rumors like this it hurts all of us. Â It harms readers because they are lead to believe a falsehood. It hurts blogs because it diminishes all of us in the eyes of our readers. Â It’s saddens me when a former excellent blog is reduced to spreading false rumors.

A few days ago, in the wake of the tragedy in Charleston, Bearing Drift titled a post, “Convention then, Convention Now, Convention Forever”, a take off on the famous Inaugural speech by Alabama Governor George Wallace in 1963 when he said “Segregation then, Segregation Now, Segregation Forever”. Â How very insensitive of BearingDrift! Â Nothing should be compared to Governor Wallace’s rallying cry for segregationists, especially this week when everyone is upset about the shooting in South Carolina! Â After a day or two the blog realized that perhaps their chosen title was a mistake and they have changed it. Â Again, it’s very sad when a blog of the caliber that BearingDrift once was stoops to using racist rallying cries to draw attention to their posts. They haven’t fallen so low that they need to do that! Â They need to recognize these things won’t help them to regain the respect they once had in the Virginia blogosphere. Perpetuating rumors and using racism to attract attention won’t return them to their former glory. Â And that’s a sad and deep loss for all of us. Â

I am so distraught by what has happened to BearingDrift, I have taken to my fainting couch and may need my smelling salts if I am to recover. Â

Don’t Believe Everything You Read, Ken Cuccinelli Supports a Convention in 2016 was last modified: June 25th, 2015 by Jeanine Martin

Does anyone really think a “conservative” candidate could make it out of a convention? There are so many conservatives I admire who think so, but I can’t help but worry that you are all having way too much fun at night. I’m too busy to “party”, so I guess I can’t help but remember Ed Gillespie.

This is going to be as far as I wade into this. Your correct in that ” Nothing should be compared to Governor Wallaceâ€™s rallying cry for segregationists, especially this week when everyone is upset about the shooting in South Carolina!”.I am insulted that you would in any way compare me to Gov. George Wallace, especially in the wake of the horrible massacre in SC. I have been a follower of TBE since the blog started. When you have to resort to calling someone racist, it says a lot of the state of the website. The title of the article originally was one of a typical American idiom. Once my friend Terrance Bolden informed e of Wallaces speech THIRTY YEARS BEFORE I WAS BORN, I changed it on my own accord because I wouldn’t want to offend anyone. I’m not that person. Its one thing to say that I got bad information, or that I am lying, but to call me racist to try to discredit my article is unacceptable from any media source.

Oh my goodness, it never occurred to me that you were not familiar with our history and that rather well known quote by Governor Wallace. It’s a shame that our schools no longer teach American history. I am sorry that anyone would think you a racist when the reality is your error was nothing more than ignorance. You poor thing.

I thought this was from the hunger games…

Paul, the way I look at it, the BD/TBE spitting contest is kind of like when Katniss Everdeen the heroine, tells Peeta Mellark the baker’s son, “Youâ€™ve got about as much charm as a dead slug.â€ Remember they still ended up together when thrown into the games and through several sequels.

Just having some fun here.

Tyler, this is all in good fun. Don’t be insulted or take it personally.

“I am so distraught by what has happened to BearingDrift, I have taken to my fainting couch and may need my smelling salts if I am to recover.” -Jeanine Martin

Not much here for me as I may be the only constitutional conservative in Virginia who could give a tinker’s damn what PACman Ken Cuccinelli thinks about much of anything, although certainly rarer in the political arena then the public marketplace yesterday’s news is still yesterday’s news.

Maybe if you bait them enough, they’ll link to you and give you more pageviews.

This is funny, Stephen. Lighten up.

My comment was also in jest. When I’m serious/not lightened, I tend to go on at length.

Taking notes for future reference. We wouldn’t want to misunderstand you.

Steve, do you have any inside information on how you think the vote will go Saturday? I’ve heard the Pro-Primary folks are really pushing the SCC members hard to vote Primary.

And Vice Versa. Pro primary folks don’t really have anyone leading their charge. Most folks on SCC are pro convention people. That was important when they were elected.

Bless your heart, you are just too precious.

Wow. It’s that bad over at Bearing Drift? Bless their hearts.