Latest Posts
Update: Miyares wins! Votes for nomination for Attorney...
How and when to view convention results
Sunday Memes
The most important day of the election
Convention details for tomorrow, May 8th, and when...
Analysis and Predictions for the GOP for Saturday’s...
Wokeness begins to invade libertarian think tanks 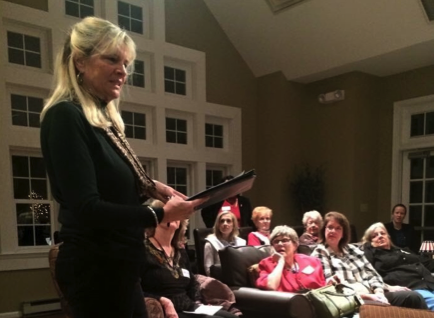 Miller will focus her campaign on growing the Party; building a robust get-out-the-vote effort and election-day operation; and ensuring that grassroots activists have a voice in Party nominations and direction of the Party. Miller will leverage her decades of experience with organizational leadership, volunteer coordination, administration and event-planning to get more people involved and grow the volunteer base.

According to prepared remarks before tonight’s Committee meeting, Dottie Miller will say, “This upcoming election for President may be the most important election in our lifetime. The road to the White House runs through Prince William County. We must work harder than ever before to turn our County red. For the sake of our children and grandchildren, we cannot risk another four years of the Hillary Clinton-Barack Obama policies.”

Miller’s first announced endorsements are Brentsville Supervisor Jeanine Lawson and Prince William GOP Lincoln-Reagan Dinner Committee Chairman Dan Varroney. More conservative endorsements are expected over the next three weeks. “I am honored to endorse Dottie Miller as our Committee’s next Chair,” said Supervisor Lawson. “Her years of service as a volunteer coordinator, military wife, ministry leader, and Bull Run Republican Women’s Club President will help our local Party prepare and work hard to turn Prince William County red for the next Presidential and statewide elections. Dottie’s commitment to God and Country is unmatched, and I’m excited about her leadership over the next two years.”

“Dottie is a strong, passionate, and determined leader” said Varroney. “I am certain that she will unite us, mobilize our resources, and help us turn out a plurality of votes for our party’s Presidential nominee in November.”

Miller was raised and attended college in Pennsylvania. She worked for 15 years as an elementary school teacher and currently works as an event-planner. Miller is married to Ken Miller, who is a retired Army JAG Officer and graduate from West Point, and now is employed by the Department of Defense. Ken and Dottie have three children and one grandchild. Dottie’s only son is also a West Point graduate, and two-time Iraq War veteran. The Miller family has been stationed in Colorado, New York, Hawaii, Georgia, Virginia, as well as in Germany. In addition to service to military families, Dottie has served various organizations as a Church Women’s Ministry Director, a Red Cross Blood Drive Coordinator, a National Military Family Scholarship Committee Chair, and a 9/11 Survivor Family Coordinator, among others.

Dottie got involved in grassroots activism during the 2000 Presidential election. Dottie moved to Prince William County in 2003 and started working with the Republican Party right away during the 2004 Presidential campaign. Miller has volunteered in every Prince William County political cycle since 2004, including serving as a precinct captain in the Brentsville Magisterial District. Miller worked with the Bull Run Republican Women’s Club for several years, and was elected its President in 2014. Under her leadership, the Women’s Club grew in membership and conducted several major community engagement projects.

Prince William County, which is the second largest in Virginia, is widely considered an important bellwether County for statewide and national elections. Prince William County has voted with every winning U.S. President, Virginia Governor or Senator since 2002.