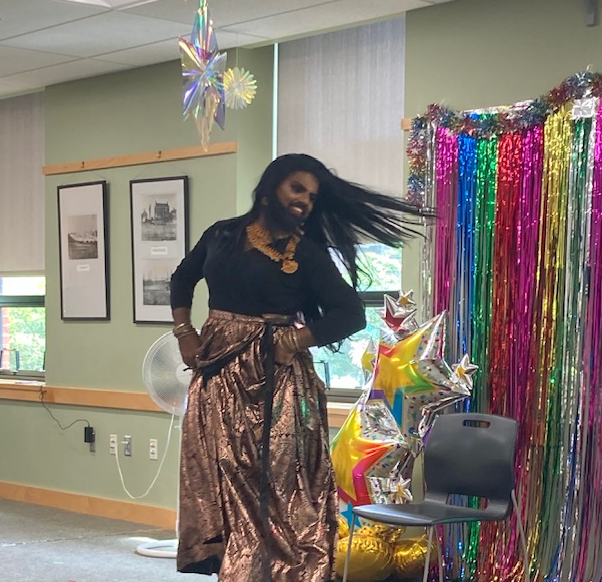 Drag Story Hour is an outgrowth of Drag Queen Story Hour, created by Michelle Tea in 2015 in San Francisco.  According to the website, “DQSH captures the imagination and play of gender fluidity of childhood and gives kids glamorous, positive, and unabashedly queer role models.”

Majic Dyke introduced herself as a Drag King and said she was a teacher.  She sported a beard and moustache made out of glitter, a long ponytail, colorful tunic and glitter boots.  Majik read a book appropriately titled Glitter.  There was one little boy who couldn’t sit still.  Majik tried to distract him with a gold, bejeweled cardboard crown, but the distraction didn’t last long.  For a time, that little boy captured more audience attention than did Majic.

Persephone Rose introduced himself as a “non-binary transgender woman, which is a lot of words to say that I’m a normal woman that gets to define what that means for myself.”  His pronouns are he and they. At one point, he introduced a stuffed toy dog by saying it was a cat.  As if on cue, a little boy piped up, “That’s not a cat! It’s a DOG!” A woman in the audience warned politely, “Don’t confuse the children.” Persephone replied, “Oh, I’m sorry,” and then proceeded to read two books, Neither and Kevin the Unicorn: It’s Not All Rainbows.

Kamani Sutra wore a blue sari, had long black hair and black beard and moustache.  He declared that when he’s in drag his pronouns are she / her, and when he’s not in drag his pronouns are he / they.  The book he read to the children was about a south Asian mom and his son.  During the first story hour, after Kamani Sutra finished his storybook, he went offstage, changed into a shiny copper-colored skirt and returned to perform a twirling dance routine.  One mother, holding a young child less than a year old, approached the twirling Kamani, but the child was upset and quickly turned away.  Kamani did not perform the dance routine at the second story hour.

The floor of the room was strewn with pastel colored paper confetti.  Glittery multi-color streamers festooned one wall, forming the backdrop for each drag king/queen’s presentation.  Flanking the wall were colorful star shaped balloons on one side and a small strobe light on the other.

Six families with children under 3 years old attended the first story hour.   Three of those families left before the end of the show, and appeared to be quite uncomfortable with the presentation.  For the second story hour, there were seven children: two infants and five in the age range of probably 2 – 6.  Also in the audience was a group of women who came out of concern that young children were being exposed to highly inappropriate performances by people in drag.  I was among those concerned women.

The atmosphere in the room was somewhat subdued, not counting the occasional little boy who needed to move around and the twirling Kamani Sutra.  Parents and children displayed a mix of bewilderment and fascination.  They kept their distance from the performers, who actually seemed a bit uncomfortable themselves.  Managing dual personalities must be awkward.

At the end of both hours, the head librarian tried to engage the children in song, but to no avail.  The atmosphere was not an exuberant one.  I would describe it more as perplexed.  People were processing what they just saw and heard: preferred pronouns, she/her, he/they, non-binary, transgender, a dog is a cat, etc.   It certainly wasn’t Mister Roger’s Neighborhood.

Remember the purpose of Drag Queen Story Hour is to “capture the imagination and play of gender fluidity of childhood and give kids glamorous, positive, and unabashedly queer role models.” Did Drag Story Hour accomplish its mission … or muddle its message?

Outside the library, following the event, some of us women attempted to engage attendees in polite conversation about what they just experienced.  There was a mix of reactions.  A few were open to discussion, while others called us “racists,” “homophobes” and “evil.”  The librarian told us to stop “harassing” people.  [What happened to the Left’s mantra, “All Are Welcome Here”?]

You may be wondering who paid for the Story Hour event, which was co-sponsored by the Fairfax County Public Library and the McLean Community Center. The Library Deputy Director advised, “The Library contributed staff planning time, marketing efforts, and the space to host the programs … which are included in the agency’s general operational costs.”  According to a Library Board member, the McLean Community Center “paid a $300 honorarium to each performer.” These monies come from a real estate tax surcharge on residents in the greater McLean Community.  In other words, your tax dollars paid for the event.

[…] The three “entertainers” who were paid with taxpayer dollars to show up at Dolley Madison Library were a “Drag King” and teacher named Majik Dyke, a “non-binary transgender woman” named Persephone Rose, and sari-wearing, bearded “KaMani Sutra.” […]

The horror that they forced these kids to watch such a spectacle… and their parents as well….

Perverts on the public dime. That’s one of the horrors.

This clearly demonstrate how little the public libraries value children. Since a payment was involved, some person authorized this and signed off on it. That person should be found out, and fired.

Sounds as though you had a good time and enjoyed the show.

Where is Child Protective Services?

Good article about an unseemly and horrifying display of chaos! My prayer is that no child anywhere will be exposed to such pornography. I hope the parents who brought children realize that such exposure to adult peversion is considered child abuse by normal adults! And yes, a multitude of demons in one person is ‘legion” by name and calls for deliverance.

Clearly just as imaginary as CRT. You conspiracy theorist! Shame on you making stuff up! (I wish I didn’t believe you, but I do.)

So, when she’s in drag she becomes singular (“her”) but out of drag he becomes plural (“they”).