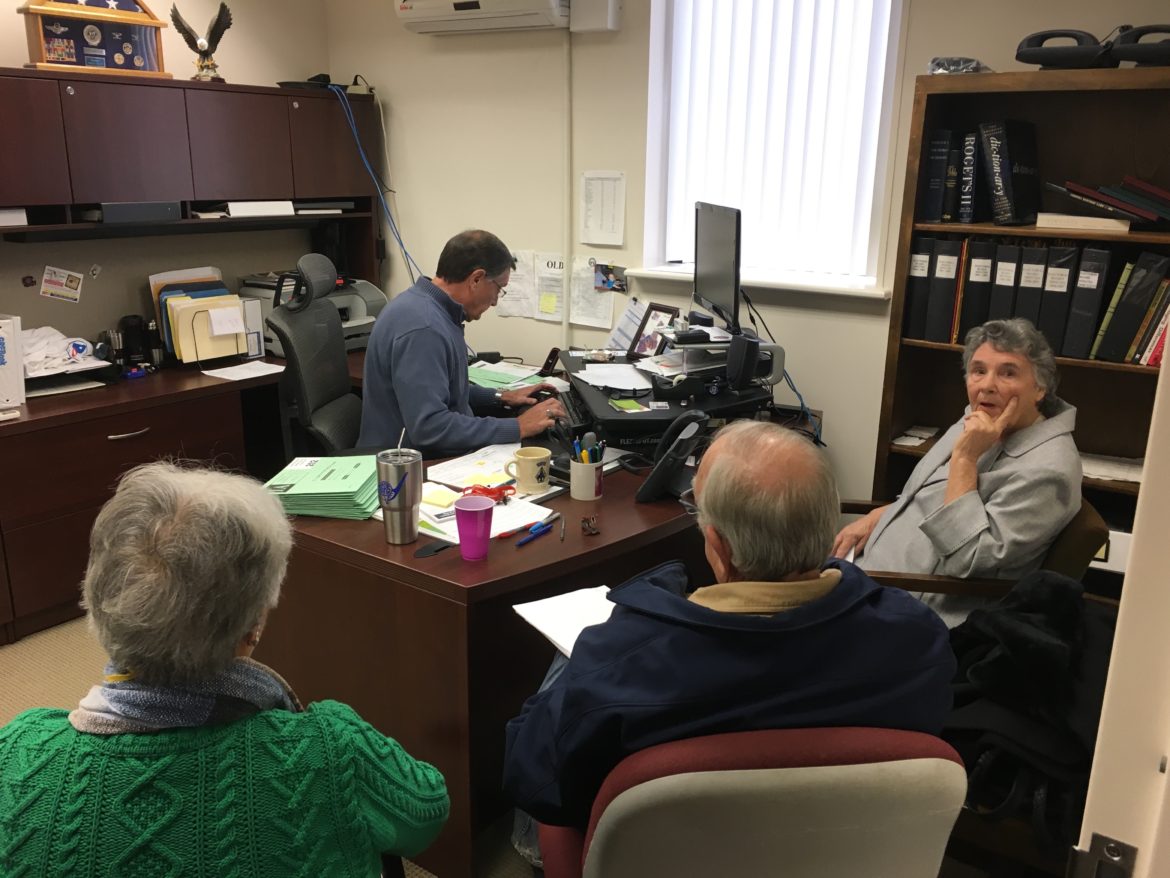 Last week’s historic victory by Virginia Democrats was decisive on many questions. However, although it went a long way toward deciding which party will control the Virginia House of Delegates, the results from Tuesday aren’t definitive. That’s where the political, public relations, and legal wrangling during the voter canvass period, and leading into any potential recount process, come into play.

Through this and a few subsequent posts, The Bull Elephant gives you an exclusive front row seat to the drama surrounding one of the seats that are still up for grabs in this process: the Stafford and Fredericksburg House District 28 seat being vacated by retiring Speaker of the House Bill Howell (R-Stafford).

This particular race has already spawned outrage and controversy statewide. Here’s the rest of the story.

Coming out of Tuesday and the initial canvass of results from the precincts, Republican Stafford Board of Supervisors member Bob Thomas led Democratic newcomer Rev. Joshua Cole by just 84 votes out of 23,627 ballots counted on election day. Thomas’ lead is a margin of just 0.35%, well within recount territory.

As with other very close Delegate races across the Commonwealth, the usual party machinery quickly swung into action to be ready for the voter canvass, where the relevant local electoral boards meet to confirm vote counts, as well as to decide the merits of claims of voters who were unable to cast regular ballots on Tuesday, and instead had to cast provisional ballots. The single most common reason for a voter casting a provisional ballot is not having a valid photo identification when they showed up at the polls. (See the upcoming Part 2 of this series for more on provisional balloting).

Stafford County comprises the bulk of House District 28, and wrinkles in this race quickly formed there after Tuesday’s close finish. Beginning on Wednesday, local Democrats on social media were overtaken by a flurry of rumors that the Stafford Registrar, Greg Riddlemoser, had unfairly thrown out over 1,100 absentee ballots on a technicality. A prominent local Democrat also began loudly making allegations that Riddlemoser had improperly excluded from the election day totals approximately 55 “military” absentee ballots.

The social media firestorm quickly moved the effort to prominence among statewide Democrats, sensitive to any perceived wrongdoing that could potentially cost them an historic majority in the Virginia House of Delegates. Here’s a sample of reactions from an article in Charlottesville’s Daily Progress:

Democrats denounced two of the three members of the Stafford County Electoral Board, Gloria Chittum, a Republican, and Marie Gozzi, a Democrat, who they said are refusing to count 55 absentee ballots of military voters.

The ballots arrived in the post office box of the registrar on Tuesday — Election Day — but were not picked up until Wednesday, said Trent Armitage, executive director of the House Democratic Caucus. He said Stafford registrar Greg Riddlemoser is apparently trying to claim that those ballots are somehow not valid, which Armitage said is “absolutely ridiculous.”

“It’s disgraceful that the registrar and two members of the Electoral Board in Stafford County refuse to count military votes,” said Susan Swecker, chairwoman of the Democratic Party of Virginia.

Democrats said they had no way of knowing which candidates the 55 votes went for — but the ballots arrived on time and came from active-duty service personnel.

Del.-elect Lee Carter of Manassas, a Democrat who served five years in the Marines, said it was egregious that Stafford officials would not count military votes on Friday — the birthday of the Marine Corps and Veterans Day weekend.

“For Stafford County to say ‘Happy birthday, Marines. By the way, your vote doesn’t count,’ it’s completely unconscionable to me,” Carter said.

Democrats appear to have let social media panic get ahead of them here though, on a couple of points. I can attest from my own service on the Stafford County Electoral Board that saying any group of state election absentee ballots in a mailbox are “military” ballots is quite misleading. It’s true that some may be, but that mailbox is going to have all kinds of absentee ballots—those from people out of town on business, pregnant women, caregivers, the disabled, and yes, some from military voters—a status that is indeterminable without examining each ballot. Which should be really embarrassing to the hacks at WUSA9, who ran with the following headiline, IN RAZOR CLOSE ELECTION, MILITARY BALLOTS TOSSED,” with a subheading reading:

“With control of Virginia’s House of Delegates hanging in the balance, Democrats and many veterans are furious that scores of military ballots have been tossed aside.”

It remains to be seen whether, as the House Democratic Caucus’ Trent Armitage charged, the ballots in question were capable of being counted Tuesday. Riddlemoser has claimed they were not, and that he and his staff had no way of taking custody of the ballots until they did so on Wednesday morning. It is not clear whether there is any evidence at all to support the allegations against Riddlemoser beyond an inference that ballots available in the registrar’s mailbox Wednesday morning might have already been in the mailbox on a Tuesday evening.  If the Democratic team are relying on the same source for the proposition that the ballots were there on Tuesday as they are for the supposed fact that the ballots are all military, then that might be an issue.

The source of the “1,100 lost ballots” allegation, the campaign of Democratic Supervisor from Garrisonville Laura Sellers, posted on Facebook a short while ago the document that was allegedly used as justification. Unfortunately for my friend Gene Sellers, he misinterpreted one of the figures on the document in a fundamentally flawed way: he said that the number of marked ballots returned by mail was actually the number of ballots that were not counted. 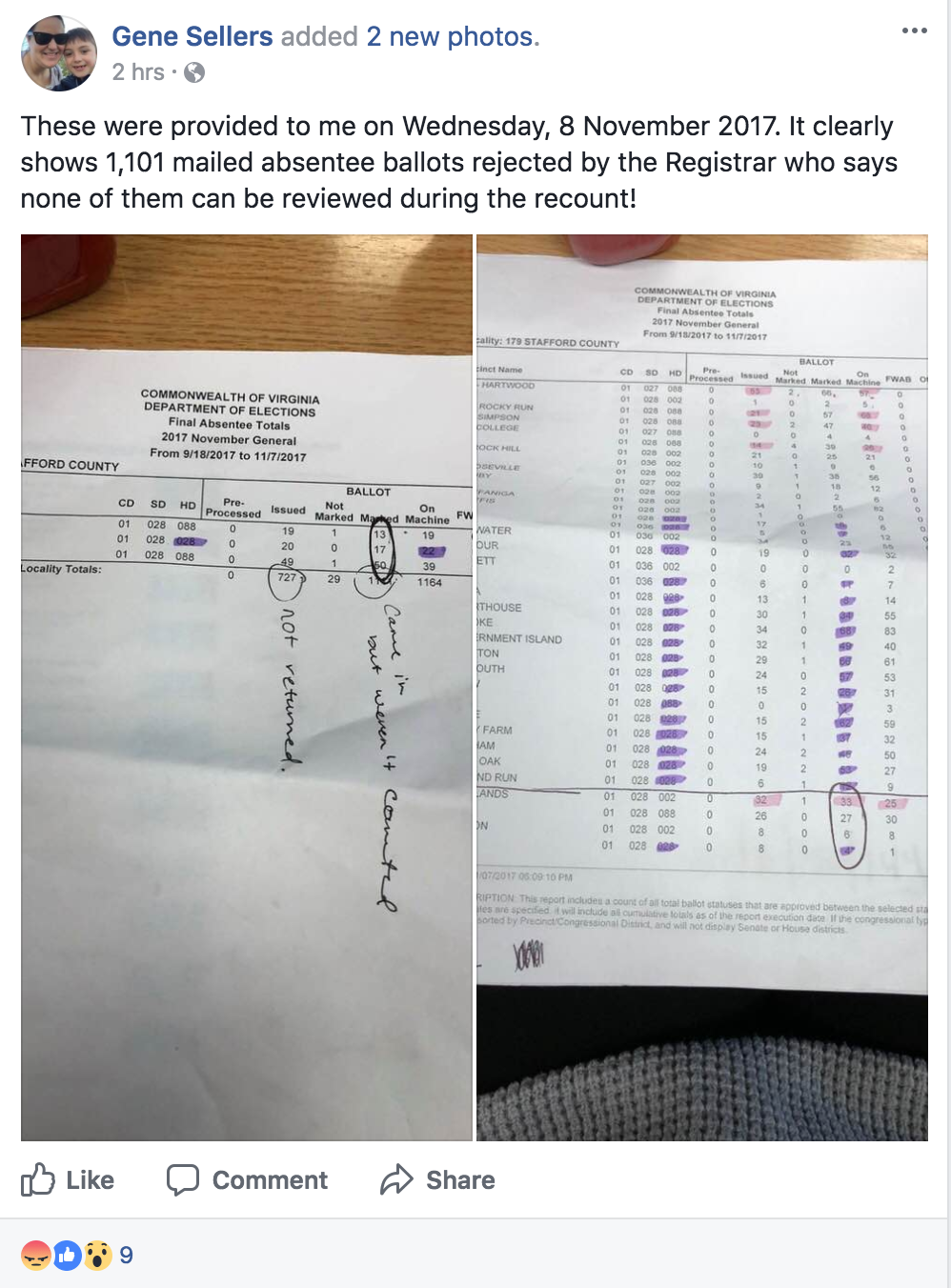 Here is my response: 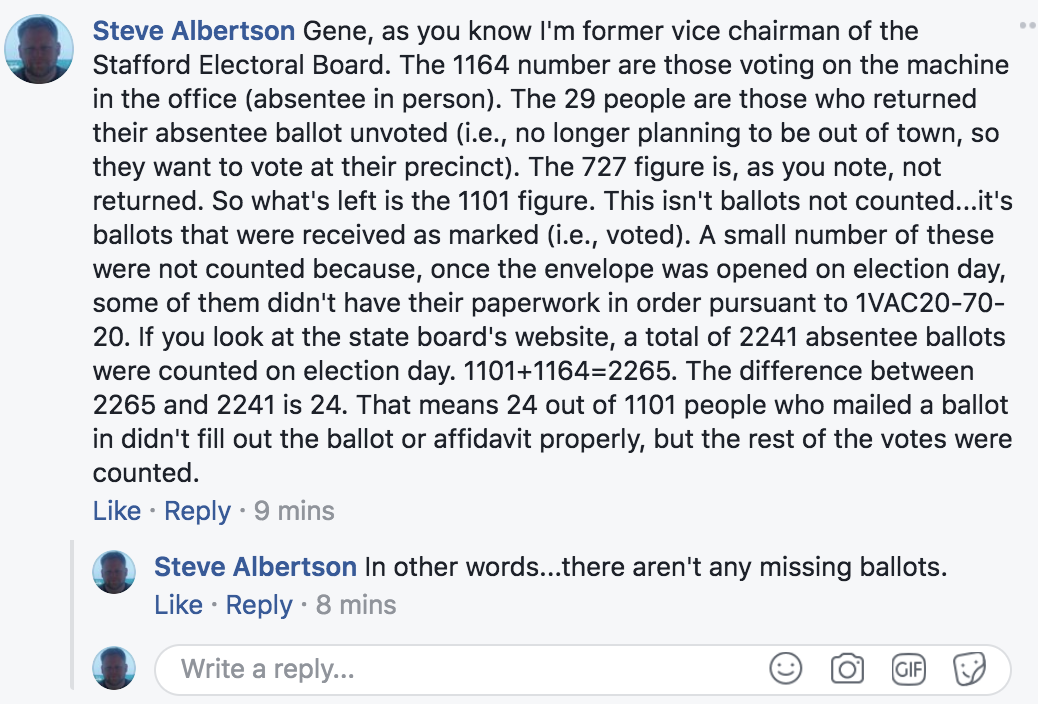 None of this has dampened the enthusiasm of the registrar’s critics, who have nonetheless taken to Facebook to organize opposition to him under the #BallotGate and #WheresRiddlemoser hashtags. A group of opponents is apparently planning on protesting at the registrar’s office starting tomorrow morning and into the early afternoon when the electoral board meets to discuss provisional ballots.

That issue (provisional ballots) has also been the subject of intense controversy since Wednesday. We’ll talk about this in Part 2 of this series. Stay tuned.