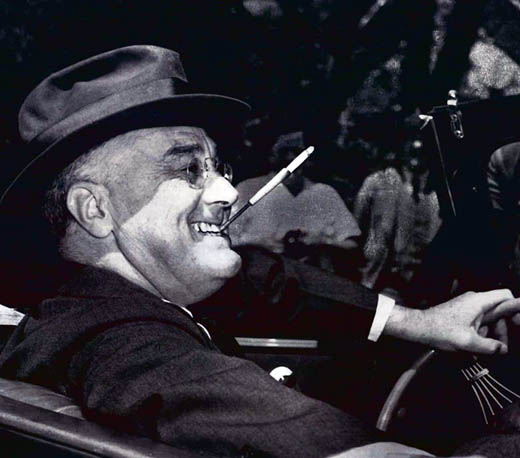 â€¦was Benjamin Franklinâ€™s snappy answer to a passer-by outside Independence Hall, Philadelphia, during the Constitutional convention of 1787. She had asked Dr. Franklin what form of government the conventioneers had devised. Historians have mused, ever since, on the prescience of Franklinâ€™s off-hand comment.

Benjamin Franklinâ€™s never-disclosed expectations behind that answer almost certainly did not include courts legislating from the bench and deconstructing American culture and morays via emanations, penumbras, and references to foreign laws and customs.

In Franklinâ€™s time, the judiciary was expected to be the weakest branch. Lacking enforcement powers, it would have to rely upon the other branches to uphold its rulings. Implicit in the Separation of Powers Doctrine â€“ although not stated in the Constitution â€“ was an assumption that the executive and legislature would refuse to comply with any judicial incursions onto their turf.

Being mere mortals, the Founders did not imagine courts advancing agendas which lack legislative support. But this has been happening regularly for the last half-century, in various states. A good example occurred in 2005, when the Kansas State Supreme Court ruled that the Kansas Legislature must appropriate $858 million from the state treasury for public schools. Although the court lacked authority to order this, legislators scurried to comply â€“ as if the court had every right to make such demands and the legislature had no recourse except to obey.

Why those legislators didnâ€™t give the equivalent of the Bronx Cheer to the court is not clear. But things have not always been so. For most of the last century the two other branches reacted strongly when courts contravened the â€œwill of the people.â€

The most dramatic of such reactions occurred in 1937, at the start of FDRâ€™s second term. During his first term, numerous New Deal programs were enacted. One was the National Recovery Administration, which organized thousands of businesses (and some 23 million workers) under fair trade codes. Compliance was always problematic, so attempts were made to use the courts for enforcement. But in 1935 the Supreme Court ruled the entire program unconstitutional.

The Agriculture Adjustment Administration â€“ designed to control crop and livestock prices by destroying animals and paying farmers not to produce â€“ was also struck down. (Most Americans thought the program insane, anyway, since people were literally going hungry at the time.)

After his landslide election to a second term, Mr. Rooseveltâ€™s frustration with these rulings produced the most radical attack on the Supreme Court in American history. FDR proposed legislation to â€œpurgeâ€ the Court of what he called â€œgovernment by senility.â€ Jawboning the members for â€œgeriatric incompetenceâ€ (imagine a president even suggesting this today), FDR called for justices to retire at age seventy. For every one who declined, FDR proposed adding a justice to the Court â€“ to a maximum size of 15. At the time, six of the nine justices were older than age 70, and the Courtâ€™s average age was 72. (See table.1)

Progressive apologists for the plan said the president was â€œâ€¦giving the Supreme Court judges a dose of their own medicine â€“ i.e., legalism.â€ One cannot appreciate how extreme the proposal really was without seeing material written at the time. A good example is â€œPurging the Supreme Court,â€ an article published in The Nation on February 13, 1937 (CXLIV, No. 7; 173), from which I furnish an excerpt:

â€œWhat the President is proposing is to dynamite the reactionary judges into retirement. To effect this he uses the most convenient handle â€“ old age. But it is a handle to a very real grievance, in the lower federal courts as well as in the Supreme Court. There are four sitting members of the Third Circuit Court of Appeals. Their average age is seventy-seven and one-half yearsâ€¦With respect to the Supreme Court, the Roosevelt luck, it must be remembered, has not operated. No appointments have fallen to him. He has had to sit by helplessly and watch the years accumulate and men decay. He now presents the tory judges with the bitterest hemlock cup any tory has had to quaff. Six of the present court are over seventy, only one of them â€“ Brandeis â€“ definitely a liberal. If they genuinely wish to keep the court from being â€œpacked,â€ they can hold the number down to nine by retiring. Whichever ones do not choose to retire must bear the responsibility of permanently increasing the court’s number by that many.â€

The uproar that would greet such a proposal today â€“ especially if made by a Republican president â€“ can scarcely be imagined. Calls for impeachment would certainly come from Democrats, and possibly even from Republicans. But 1937 was a different time. FDR was at the apex of his popularity. Many progressives believed his court-packing proposal was exactly the leadership needed for FDRâ€™s revolutionary New Deal to take off.

Nevertheless, the effort crashed. A Democratic-majority Congress thought it was too radical and refused to enact it. FDR could not have everything he wanted. (Readers may read the Nation article in its entirety.2)

The initiative achieved the desired effect, however. As one political observer famously said, â€œThe justices read the newspapers, tooâ€ â€“ meaning that they could see what the political majority wanted and what blocking it might mean. FDRâ€™s attack ended all Court opposition to the New Deal, and Hugo Blackâ€™s 1937 elevation to the Court broke the appointment log-jam. Ultimately, FDR appointed eight new justices â€“ the most appointed by any president. All were progressives.3

This brings us to Joe Biden and the Court-packing plan being advanced by the radical left wing of his party. Like FDR, Mr. Biden faces a Supreme Court whose rulings often block his partyâ€™s interests. The court is not â€œaged,â€ as it was in 1937. 4 Justice Breyer is the oldest justice (age 83); Justice Barrett is the youngest (age 49); and the Courtâ€™s average age is 64.

But President Trump was able to appoint three justices during his four-year term â€“ the most of any president since Ronald Reagan. This has given the Court an apparent 6-3 conservative majority, although recent rulings by Chief Justice Roberts have not seemed very conservative.

Wherever Chief Justice Roberts might go in future, politically speaking, leftist Democrats see nothing but gray skies ahead with a fairly solid 5-4 conservative majority on the Court. They are additionally bummed because they had expected a Hillary presidency to solidify a strong liberal court, far into the future. But now, like FDR, they believe that increasing the number of justices is their only path to obtaining a friendly majority on the Court. Proposals are being floated to add four new justices, bringing the total to thirteen, and giving liberals at least a 7-6 majority.

Whether this radical plan can make it through the Congress is far from certain. Democrats hold a majority of only 222-213 in the House â€“ just five seats away from defeat on any controversial issue. And the Senateâ€™s 50-50 tie means that only 1 Democrat would be needed to scuttle a plan to pack the Court. Democrats might try to wait for favorable political winds, before bringing such a plan to a vote in the Congress. But if current uproars over wide-open borders, uncontrolled spending, COVID-politics, and inflation warning-flags are any indication, those winds might not turn favorable very soon. Besides that, not every Democrat in Congress favors engineering expansion of the Court for the first time in 150 years.

In the realm of speculation, several other possibilities might lie ahead. The first is what we might call â€œthe scareâ€ â€“ something like what FDR did in 1937, when his monster-mash act scared the Court into line. Although his court-packing wasnâ€™t enacted, his threat to do it spooked the justices into getting out of Dodge before any real shooting started (figuratively speaking, of course.)

In my opinion, Democrats have already put the scare on Chief Justice Roberts. Weâ€™ll never know if a raspy-voiced guy named Guido phoned the Chief Justice late one night to threaten his family, or to promise that some salacious event from his past would be revealed, unless he became more â€œliberal-friendly.â€ Or maybe the threat to turn the Court on its head by a radical expansion was simply â€œan offerâ€ the justices couldnâ€™t accept. Iâ€™ll get the horselaugh for this, but in todayâ€™s political climate anything is possible. (The justices still read the newspapers â€“ or maybe the Internet.)

Another possibility is that Democrats might pass their Court-packing plan, but then fail to gain Senate-approval of any of Joe Bidenâ€™s nominees for the new seats. Should Republicans manage to reject any new justices through 2022, and then gain a Senate-majority in the mid-terms, those new seats could remain unfilled through 2024, or even later.

Of course, Joe might decide to nominate some conservative justices acceptable to a Republican-controlled Senate. But that would represent an extreme backfire of Demsâ€™ court-packing ploy. Being Joeâ€™s age, I can understand it though. He might decide that he â€œlikes the action.â€

A voyage into uncharted Supreme Court waters might be a Republican follow-up move to reverse Democratsâ€™ expansion of the Court. The Constitution says only that the Congress determines the size of the Court. It does not say that the Congress can only expand the Court, but can never shrink it. Decreasing the number of justices has never been tried before, but that doesnâ€™t mean it canâ€™t be done. Stay tuned.

As the Chinee (heathen or otherwise) like to say, â€œMay you live in interesting times.â€

Dueling with the Supreme Court was last modified: May 27th, 2021 by Woody Zimmerman