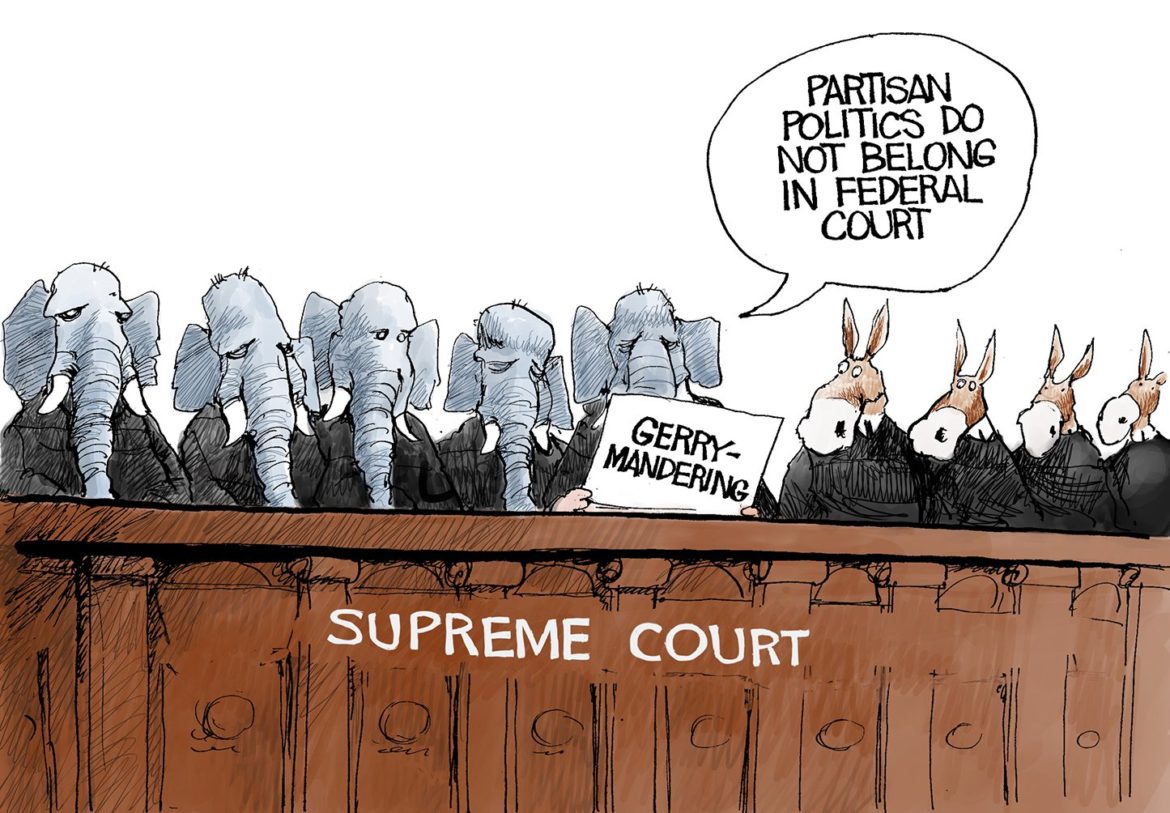 In two previous articles I argued that our government has become dysfunctional, citing the curious tone-deafness exhibited by the president and Congress toward the voting public on immigration1 and energy2. Readers will judge whether I made the case, but I stand by my assessment that something is seriously wrong when a president and a large segment of Congress take positions diametrically opposed to views held by most of the voting public.

This third article in the series examines dysfunction in the court system – not out in some eccentric backwaters, but in our highest federal courts. Commentators like to say the judicial system is “broken” when they believe a particular court case has been wrongly decided. This is usually just their opinion on how things ought to be. But in this discussion I’ll give more than merely my own opinion on several cases. I’ll attempt to apply the classical measures of legislative intent, Judeo-Christian morality, jurisprudential precedent and Constitutional harmony, starting with a brief discussion of each of these measures:

Legislative intent bears mention because we’ve become so accustomed to courts making “law” that what the legislature intended seems almost incidental. Legislation is the expression of the people’s will – as directly as is possible in a republic. The Constitution permits wide latitude for this, so a few judges should not be able to thwart that will because they disagree personally with a law, or because that law expresses an “animus” they dislike. The whole spirit of the Constitution – obvious to all but the most obtuse – is that The People get the nod. Within the Constitution’s boundaries, our will is supposed to be paramount because we are a self-ruled people.

Judeo-Christian morality is much jeered at today, but scoffers only show their ignorance. History is replete with nations that were ruined by going off the Biblical rails. Biblical law informs our whole system. What says the Bible about law and government? That the law’s purpose is justice, applied equally to all, and that government’s business is:

“Why should our laws be based on the words in some old book?” a colleague once asked me. I answered by asking: “which of those principles of Biblical morality would you like to see discarded?” Many who say they’d like to pitch the Bible out of our legal system turn remarkably cautious when they see what that might actually mean. Indeed, we’re getting a demonstration today, in various cities across the country, of exactly what the loss of Biblical morality will mean.

Jurisprudential precedent has gained a permanence approaching holy writ – except, ah, when the Supreme Court decides that a precedent should be overturned. How this conundrum applies at any given time depends on the issue, the political climate, and the Court’s composition. The “rules” are both simple and contradictory. Call them the Doctrine of Precedent:

One need look no farther than these bizarre, extra-Constitutional “rules” – constructed out of whole cloth by liberal partisans – to understand where we went wrong.

Constitutionality of laws is essential. The Constitution is amended only by a two-step process:

But only the Constitutional text is the Constitution. The text of a Supreme Court ruling (or any portion thereof) does not become part of the Constitution. “Abortion rights” – mentioned nowhere in the Constitution – are now regarded as part of the document without actually being in it. The Court has executed this feat of legerdemain in full view of the American people, with the complicity of lawyers who knew better. It is one of the most remarkable political acts in history.

Some recent court decisions merit examination because they show what turmoil results when any of these important principles is ignored.

The Lewis Libby perjury case was big news during the G. W. Bush administration. Mr. Libby – Vice President Cheney’s former chief of staff – was sentenced to 30 months’ in prison for “lying” to a grand jury during Special Prosecutor Patrick Fitzgerald’s investigation into who revealed that Valerie Plame was a CIA agent. Some opponents of the Bush administration applauded Mr. Libby’s punishment. But others – who actually disagreed with Mr. Libby and Mr. Cheney, politically – were appalled at the verdict and harsh sentence. Many legal scholars have decried it.

The case violated two key Judeo-Christian principles: i.e., justice and appropriate punishment. The justice (actually, injustice) aspect was especially problematic. Prosecutor Fitzgerald set out to investigate a “crime” which he knew, from Day One, had not been committed. Valerie Plame was not a “covert agent,” as defined by applicable statutes. Thus, her status was not protected, and whoever disclosed it was not a criminal. (Ultimately it turned out not to be Mr. Libby.)

Mr. Fitzgerald’s “investigation” was a sham used to catch Mr. Libby in “lies” about issues of no legal importance – i.e., the equivalent of “did you eat a ham sandwich on March 23, 1988?” Those who say this case was a pursuit of “justice” have lost all understanding of the concept. That Mr. Fitzgerald was not brought up on ethics charges for his outrageous conduct means that the concept of “prosecutorial abuse” is now meaningless.3

By contrast, the case of Sandy Berger, former national security advisor to President Clinton, was remarkable in an opposite sense. Working inside the National Archives, where officials left him unsupervised, Mr. Berger secreted numerous classified documents in his clothing, hid them in a nearby construction site, and ultimately destroyed an undetermined number of them.

These acts would surely have resulted in imprisonment and permanent denial of a security clearance for any ordinary person. But Mr. Berger – whose motivation for destroying selected copies of national security documents from the Clinton administration was almost certainly political – was sentenced to 100 hours of community service and required to pay a $50,000 fine.

This curious case – for which no satisfactory explanation has ever been given – got very little media coverage, except a certain amount of har-har-har-ing over the documents-in-the-pants shtick. Media curiosity over which documents Mr. Berger stole – and why he stole them – has been AWOL. We have only Mr. Berger’s word that he “cut up” some copies with scissors. His sentence for an undeniable act of espionage was extremely lenient.

Why did Mr. Libby get 30 months in jail and a $250,000 fine for “lying” about a non-crime (if indeed he did), while Mr. Berger got slapped on the wrist for a real crime? Was this “equal justice” and “appropriate punishment?” Both cases stink to high heaven.

On April 19, 2007, the Supreme Court finally ruled on the Partial Birth Abortion prohibition passed in 2003 by Congress. In a 5-4 decision, the Court let the law stand. This was the first time a law restricting abortion-on-demand was allowed to stand without an exception to protect the “mother’s health.” In the past such provisions had essentially negated all abortion restrictions, since “health” could always be interpreted as mental health – thereby allowing any woman upset over her pregnancy to plead that she needed an abortion to preserve her health. The 2003 law lacks that provision – although it does include an exception to protect the mother’s life. The Court found no difficulty, however, since other abortion procedures remained available.

Critics who call the PBA procedure “Nazi-esque” are right. It is something straight out of Dachau or Auschwitz. A viable, fully formed child is delivered, all but the head – i.e., the reverse of a normal delivery. The abortionist then pierces the base of the child’s skull and vacuums out its brains, killing it instantly. The deflated head easily passes through the birth canal, completing the macabre procedure. It is impossible to deny that a living child – literally inches from life – has been destroyed. Yet hardline abortion solidaristas continue to denounce the new restrictions. The 2003 law passed the House of Representatives by a vote of 281-142 and the Senate by 64-34.

Thus, the Supreme Court has upheld prohibition of an absolutely barbaric abortion procedure – certainly a good thing. Then why do I call the decision “dysfunctional?” Because of the margin of the Court’s vote: five to four! (“A damned close-run thing,” as the Duke of Wellington once said on another matter.) This means that 44% of our highest judges thought killing a child in this way was OK. My God! With House and Senate majorities of nearly two-thirds enacting the law – and even larger percentages of public approval extant – why would the Supreme Court come within a single vote of permitting a procedure that Heinrich Himmler would have been comfortable with?

At least part of the answer goes to “tenure.” Federal judges are appointed for life. They can be removed only by Congressional conviction for “malfeasance.” This has been done, but it is rare. It happens only when an actual crime is involved, like bribery. Barring that, a judge can sit for a very long time.

The nine current Supreme Court justices have served 30, 17, 16, 15, 12, 11, 4, 3, and 1 years – an average of 12.1 years per member. The Court is also younger than in other eras. (See Table.5) Mr. Trump could appoint the three newest justices because Justice Kennedy retired, and Justices Scalia and Bader-Ginzburg died. All were age 80 or more when they left the Court. Many earlier justices also reached great age before retiring or dying in office. Justice Oliver Wendell Holmes, Jr. – a Civil War Veteran, was 91 when he retired from the Court in 1932; he had served for 30 years. The Supremes are often a “blast from the past.”

Lifetime judicial tenure was a controversial issue in some earlier times. Faced with a Court that kept knocking down his New Deal programs, Franklin Roosevelt attacked the court for being “old and out of touch.” He threatened to add a new justice for each sitting justice over age 70 who refused to retire. (The 1937 Court contained six justices above age 70.) Congress wouldn’t buy FDR’s radical “packing” scheme, but he essentially spooked the justices into retirement. He appointed eight Supreme Court justices between 1937 and 1945 – more than any other president. (See “Dueling with the Supreme Court”4)

I can see advantages in mandatory retirement at a specific age (70 or 72), or in a non-renewable term of fixed length (perhaps 15 years). Constitutional amendment would be required, of course. This might be difficult to achieve, since liberals often regard superannuated judges as allies in their long march to move the country leftward. But as the number of younger conservative justices on the Supreme Court has grown, liberals might see wisdom in joining a bipartisan effort to limit tenure. This won’t entirely heal dysfunction in the courts, but it might be a good first step.

Beyond this, a fundamental overhaul of judicial attitude and practice is needed. This should start with appointment of judges who understand (and accept) the principles of legislative intent, Judeo-Christian morality, and Constitutionality. A balanced attitude toward jurisprudential precedent would also be helpful. No more “untouchable” precedents.

Courts are guardians of the nation’s laws and protectors of the people. They are not our unaccountable masters. Every now and then they have to be reminded of that. This seems to be such a time.

3. At the close of his second term, President George W. Bush pardoned Mr. Libby from the prison term, but let the $250,000 fine stand.