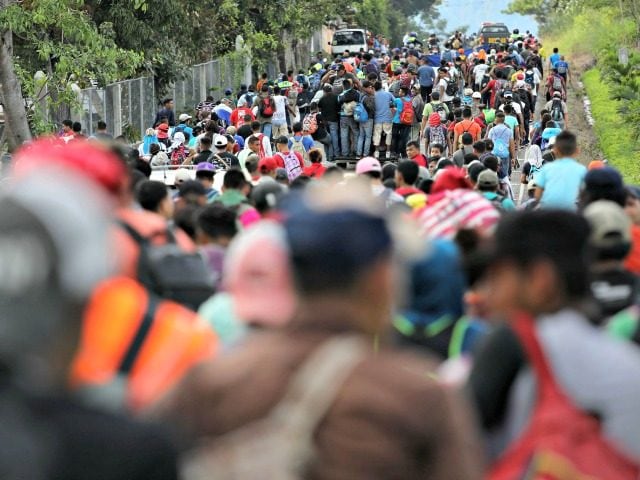 Something remarkable is occurring in our government these days. I thought I had seen nearly everything through seventy years of observing politics, but what has been happening (or not happening) with illegal immigration feels like a voyage into uncharted waters.

Americans – who send senators and representatives to Congress and put presidents in the White House – are getting an in-your-face lesson on who is really running things, and exactly what we can do with any objections. (It brings to mind a crude expression from the old neighborhood which, for the sake of delicacy, I shall leave as an exercise for the reader.)

The American people now understand, at a minimum, the following about illegal immigration:

Commentators and politicians cite various polls in arguing that most Americans want current illegals “regularized.” But those polls invariably show that 60-70% of us want the flow of illegals stanched before either citizenship or legal status are granted to those who have sneaked in.

Clearly, our current million-plus-a-year illegals-flood – opened by the Biden Administration after President Trump had brought things under control – is roaring ahead, despite Mr. Biden’s fatuous claims that everything is fine and there is no “crisis.” But actions (or inactions) speak louder than words. The day he took office, Mr. Biden stopped construction on the USA-Mexico border wall and gave orders to halt all protective measures engineered by Mr. Trump’s agents.

I hasten to add that this cavalier treatment of border-security is not localized to presidents of the Democrat-brand. In October 2006, President Bush signed a law authorizing a 700-mile fence to guard one-third of our border with Mexico. But after seven months, how much of that fence had been built? Answer: 2 miles! How hard is it to build such a fence? Answer: Not very hard – even if it has two or three layers of wire, with sensors, lights and towers.

Why didn’t the fence go up in a few months? The answer couldn’t be that the construction was too difficult. Instead, it indicates cynicism beyond the comprehension of most Americans of any political stripe. A child could see that Mr. Bush didn’t want the fence because he didn’t want illegal immigration stopped. (No other theory fits the fact of two miles of fence in seven months.)

Mr. Bush signed this legislation for political expediency, just before the 2006 mid-term elections. And he delayed any serious work on the fence because he expected the new Democratic majority to undo the legislation. (Why build it, if we have to tear it down later?)

Later, in mid-2007, Mr. Bush and his open-borders allies in the Senate made another game-try to enact legislation that would have legalized millions of illegal residents. The bi-partisan sponsors seemed to have enough votes lined up (60) to invoke “cloture” and bring the bill to a floor-vote, when a sudden eruption of phone-calls from hostile voters jammed the Senate switchboard and turned the Senate on its ear (so to speak). Spooked by the opposition, several earlier supporters of the bill backed out. This caused the failure of several cloture votes and prevented a final vote on the bill.

We’ve received several lessons here on how our three-branch system of government operates, and where it breaks down. Citizens, who thought a bill passed by Congress and signed into law by the president was a “contract” with the people, can now see that it is nothing of the kind. Indeed, if the president does not enforce a law through the agencies of the executive branch, it is as if it was never passed.

Failure to “execute the laws of the United States” – which the president swears to do in his oath of office – is a “high crime” of the kind the Constitution specifies as grounds for a president’s impeachment and possible removal from office. Application of this remedy is very difficult. It’s been attempted only four times by the Congress over 232 years, and has never been completed successfully. Two-thirds of the Senate must agree that the president is guilty of charges brought by the House of Representatives in order to unseat him. In other writings I have called impeachment a “worthless remedy” – almost impossible to execute because it is always political.

In 1868, Republicans of the 40th Congress held a Senate-majority of 57-9, but still failed (by one vote) to convict the unpopular Andrew Johnson for ignoring the Tenure of Office Act. And the House of the 105th Congress impeached Bill Clinton in 1998 for jury-tampering and committing perjury in a court of law – both serious crimes for which he ultimately lost his Arkansas law-license – but the Senate fell far short of the votes required to convict him.

Closer to our time, the House of the 116th Congress impeached Donald Trump in December 2019 on a charge that he abused power by demanding a quid pro quo from the president of Ukraine. And in January 2021 – just a week before the end of Mr. Trump’s term – the House of the 117th Congress impeached him on a charge of treason for (supposedly) instigating the Capitol riot of January 6, 2021. Neither impeachment gained enough Senate-support to convict Mr. Trump.

In the vein of “dysfunctional government,” what does all this mean? It means that on illegal immigration Mr. Biden can stick his thumb in the eye of the voters with no fear, except that his party might be hurt. (Obviously he is not losing much sleep on that score.) Since he probably won’t run for another term, he is untouchable, except by impeachment or by the courts.

As we have seen, the impeachment remedy is impractical. And so far as I am aware, no court has yet “ordered” the president to enforce a law which he has not enforced (or has enforced inadequately). Constitutional lawyers will beard-stroke and ponder whether courts can do this, but a fifth-grader could tell you that neither action is in the Supreme Court’s purview – although it is not a “given” that fifth-graders today even know what the Constitution is.

The obfuscation surrounding illegal immigration is not all on the president’s side. The Senate is notorious for being unresponsive to what large majorities of the voters want on this issue, as we saw in the 2007 incident. This is partly because of how the Senate is constructed. Each state has two senators, so smaller states exert disproportionate weight. Wyoming (pop. 569,000) has as much influence in the Senate as California (39.4 million).

This means that the 26 smallest states, representing only 60 million people (about 20% of the country), could form a working Senate majority. This rarely happens, but it is possible. The imbalance explains why the Senate acts contrary to voter-majorities on some issues.

The time until next election for individual senators is also a factor. Only one-third of all sitting senators face the voters in any given election. Another third will stand for re-election two years later, and another third four years later. These realities can affect a senator’s vote. Constituents might remember an unpopular senatorial vote at the next election, but often forget it by the second or third biennial cycle. Thus, senators can feel freer to exercise independent judgment on issues when their next election cycle is two or four years off.

Finally, neither senators nor representatives consider issues “in a vacuum.” Although members of both houses know that illegal immigration is opposed by a substantial majority of Americans, they also feel heat from powerful, well-funded business and political interests that do not want the flow of poor, low-skilled immigrants stopped.

Some businesses use illegal workers directly, but others merely see illegals as a means for depressing wages. Both political parties hope to convert illegal immigrants into legal voters who will lean their way. Democrats are leading in that horserace because they tend to promise more government largess to poor immigrants.

Mr. Biden is letting the flood of illegals continue, while he tries to deceive voters into thinking he is doing the opposite. It gives me no pleasure to charge a president with deception, but if the shoe fits, I say “wear it.”

The American people are at their wits’ end over illegal immigration. They send presidents, senators and representatives to Congress to represent The People’s interests, but those politicians often end up catering to special interests who can fund their campaigns or boost their careers.

Crowds of illegals stage marches and public protests to secure their “civil rights.” Politicians expect this, but they are pretty confident that ordinary Americans who work hard, pay their taxes and obey the laws won’t take to the streets and make a scene. Perhaps it’s time to teach our lords-temporal that they might be mistaken about this. Enough is enough.

There is no money in promoting border security or enforcing immigration laws. None. Not one lousy mother loving corporation doesn’t want illegal immigration and mass migration to be stopped.

It is not in their interest. But you miss a major reason. At this point a lot of corporations do not make anything in this country anymore. Procter and Gamble, a major virtue signaling pile of crap multinational company does not make its products here. Go look at a shaving cream can. Go into Walmart. Find any American made products?
What corporations really want is customers for their products. They won’t pay taxes to support illegal immigration… baloney Democrats who come here and support Demented Joe and Willie Brown ‘s cockholster… (using one of your favorite comedian’s phrases there). Joe’s not going to give them the bill for importing poverty to the US…
But you the local taxpayer WILL pay the bill. There is NO such thing as cheap labor in a welfare state such as the United States has become.. nor are their cheap customers for corporations… You get to pay. P&G won’t …

So you have the Congress whores or the President whores like Obama Biden and yes Bush. They get paid for opening the floodgates for corporations customers.

It doesn’t matter what you want. You don’t matter. Wall St calls the shots here. They get you to pay for illegal immigration when the bastards aren’t gaming the financial system or having you the taxpayer bail them out.

So forget about it… Might as well open the border. A lot of the GOP wants that too! Let them lose their elections to demographic change. I care not.