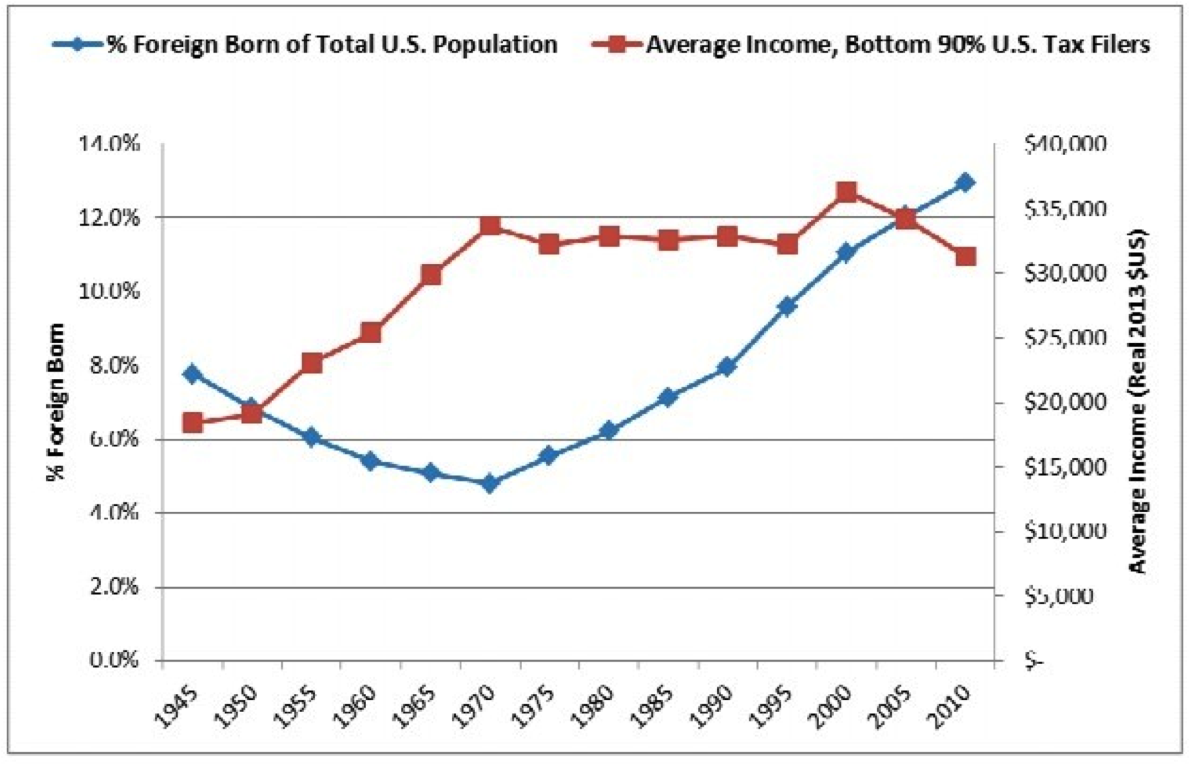 The wild volatility on both Wall Street and China’s Shanghai Composite Index is a timely reminder that Economics 101 is a cruel and impersonal master.

Its essentials can be fiddled with, circumvented, massaged, and mangled. But in the end – and there is always an end – you cannot escape the laws of economics; they don’t care what you think is right, fair, or equitable. They are what they are.

What’s happening in China is, of course, fairly obvious. You have a bunch of unrepentant communists who are reaping the whirlwind of contradictory polices that demand total control and fidelity to a political dogma, itself at war with human nature – which, without any moral substructure, rests solely on the lust for power compelled by brute force – of which they are particularly fond.

Here in the United States, we have another dilemma altogether. We have a nation founded on Judeo-Christian values and constitutionally arranged to diffuse and limit government power, while promoting free markets and free exchanges between willing individuals. Now we are tasting the bitter reward for multiple decades of stunningly stupid economic policies that reject that history, not to mention basic economics and common sense.

This is obvious and being proved out in a hundred different ways in the American economy, such as with a national debt now larger than the yearly gross domestic product of the whole nation and requiring enormous interest payments; crippling regulations that are driving down business formation for the first time in many decades; a massive meltdown in housing that didn’t have to happen, with shadow inventory still hiding in bank portfolios; or Obamacare that is already a financial train wreck with the worse yet to come in 2016.

But the matter that directly affects the lives of average Americans the most is the vortex of bad mojo involved in “globalization” largely, and our “free trade” agreements specifically, mixed with the toxic cocktail of unchecked legal and illegal immigration.

The former largely ends our capacity to build things – to be masters of our national destiny; while the latter decimates the human capital that makes the nation work, and are “the people,” whose protection is the primary Constitutional duty of every public official.

Of course, free trade – meaning that partners can buy and sell to each other on a more-or-less equal footing, each providing certain goods or services at a price that the other cannot, and vice versa – is a documentable benefit to participating economies and, of course, an article of faith to political conservatives.

Which is why it’s a crying shame we don’t have much, if any.

In only two decades, the U.S. has seen untold millions of American jobs exported – and tens of thousands of the factories in which those jobs existed unbolted and moved overseas. Much of our most critical manufacturing capacity has been lost under the rubric of “free trade,” when it was actually “managed trade” at best, with scant evidence of reciprocal transactions that benefit the nation as a whole. 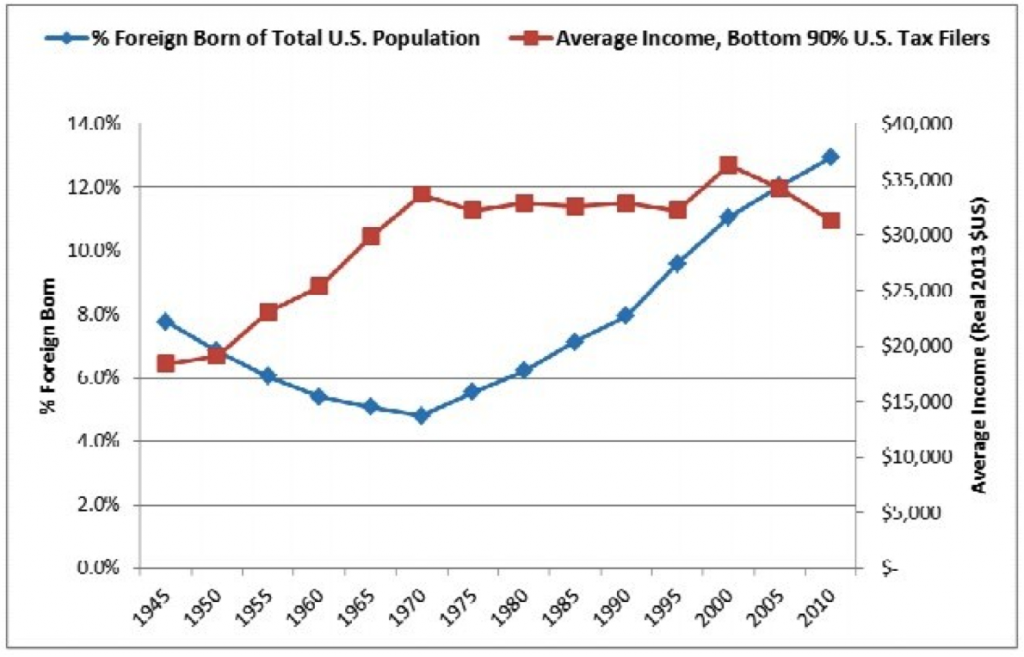 Quite the contrary, these agreements have been demonstrably riddled with various industry subsidies, consumption taxes, VAT taxes, and currency manipulation that protect competing economies from U.S. goods, or which are used to suborn markets all together.

But while the various trade agreements put in place since NAFTA in 1993 were driving down employment opportunities, massive and unchecked increases in both illegal and legal immigration began eating up lower income jobs and forcing wages down. The nonpartisan Congressional Research Service reported to the Senate Judiciary Committee that the foreign-born population of the United States surged 324.5 percent, from 9,740,000 to 41,348,066, from 1970 to 2013, with most of that coming in the last two decades.

As that happened the incomes of the bottom 90 percent of working Americans dropped 7.9 percent in 2013 dollars in the past decade; from an average of $33,621 to $30,980, and projections for 2014 show the same trend. The damage is also seen in the net worth of the average American family that has dropped nearly 40% in inflation adjusted dollars between 2003 and 2013, and indications are that 2014 will show a further slide.

While the huge dismantling of American manufacturing has been going on, conjoined with falling incomes and falling net worth, we have witnessed very large increases in the rate of poverty, food stamps, and especially the growth of childhood poverty. With 93 million working age American’s out of the workforce and part time employment becoming the norm for all too many citizens, the U.S. Census reports this month that legal and illegal immigration will soar to 51 million in just the next eight years and will account for over 80% of all population growth.

Finally, this week, we learned that over 50% of all immigrants, legal and illegal, are on at least one source of public assistance.

This dooms, if left unchecked, younger, native born American citizens to a grim employment future. But, it gets worse. Almost every presidential candidate now on the Republican ballot for 2016 endorses and are enthusiastic supporters to this economic irresponsibility; massive trade agreements and unlimited immigration. They all (save two) want “immigration reform,” without much definition of what that means. But generally they are advocating more legal immigration and refugee immigrants, while pledging to “secure the border,” whatever that means.

In addition, these candidates, with two possible exceptions, want to massively increase H-1B visas, which are a special class of visa that allow American companies to bring in professionally skilled immigrants at vastly reduced wages, to replace their U.S. citizen employees. We have already learned with Disney and other U.S. corporations that this is fast becoming a new U.S. business model to drive out higher paid American professionals for a more compliant population who in effect become indentured to the employer who sponsors them for the H-1B work visa.

It is almost as though the peoples own government is at war with the citizens they are sworn to protect. The “ruling class” shows very little concern about the long term consequences of the irrational policies they have unleashed on the nation.

While free trade is a laudable goal and sound economics, we have been hoodwinked by economic charts that show the gains and losses resulting from “free trade” policies at the expense of paying attention to what is happening to average American citizens – for whom economic theory is not an academic paper or graph, but is the daily reality of making a living and raising a family – and doing the right thing.

If the politicians – left and right – want to know why 75 percent of Americans think the nation is on the “wrong track” according to recent polls, then they need look no further than the vortex of wrong-headedness that has been driven by internationalist business models and irresponsible immigration policies.

This election season is the opportunity for Republicans, at least, to hold the candidates collective feet to the fire. There is no bigger issue than this. Primary voters need to ask really hard questions of the herd of presidential wannabes: What is the place of America in the world? Do we care more about the U.S., or China, India, Mexico? Are we more interested in American workers, or immigrants? Are we more concerned about cheap imports, or employed Americans that can afford imports? Can we survive as a non-manufacturing country? What if there is another major world war, and all of our critical manufacturing is in the hands of our enemies? Finally, and most importantly, what kind of America do we want to leave for our children and grandchildren?