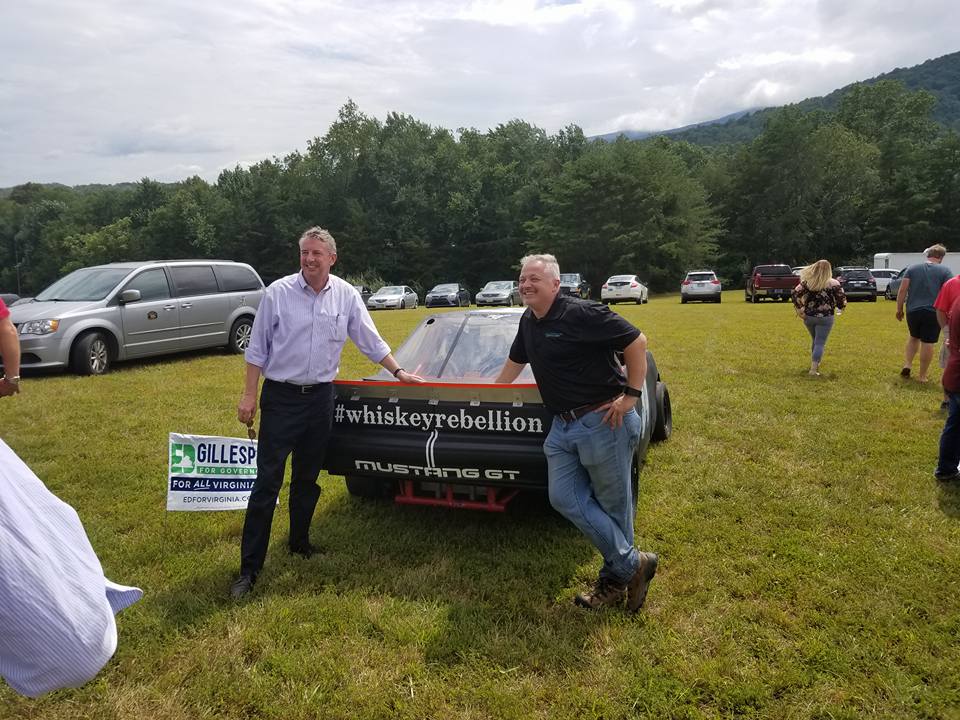 About two months ago, my friend Zach Williams and I had the idea of dragging a bunch of liberty republicans up to Silverback Distillery in Afton, Virginia to meet Denver and Christine Riggleman, the heart and soul of the #WhiskeyRebellion in Virginia.  Soon we found out that we would be met with Delegates Nick Freitas and Ben Cline, state Senator Bryce Reeves, and the next Governor of Virginia, Ed Gillespie. This is what happens when you tell an infrastructure analyst like Denver Riggleman that you are putting pieces on the board. They maximize its potential beyond anything you could imagine.

Denver Riggleman and the Whiskey Rebellion has gotten behind Ed Gillespie in the hopes of giving our General Assembly a Governor willing to sign magnificent legislation long vetoed by the likes of Mark Warner, Tim Kaine, and Terry McAuliffe. Gillespie, speaking in front of over a hundred patriots in fields overlooked by the mountains of Central Virginia, embraced our liberty, anti-regulation message in full. 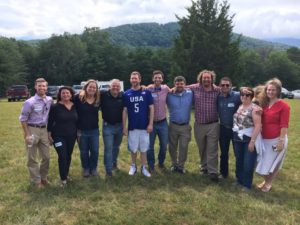 For those doubting the importance of Ed Gillespie, let me make a case. For years, conservatives have complained that we’ve gone in the wrong direction under a Republican General Assembly and a series of Democrat governors. There are conservatives that worry that the next Republican governor could make some of the same mistakes that Bob McDonnell made during his administration. Let me assure you, that will not happen with Ed Gillespie. Ed Gillespie, as early as December of 2014, began reaching out to TEA Party leaders and conservatives. He did not ask for or demand support. He simply asked us what mattered most to us. He wanted to understand where we were coming from, what we were passionate about, and which hills we were willing to die on. I treasured my conversation with Ed, even two years after the fact, because he didn’t win me over – yet, he tried. He didn’t give me talking points. He tried to win me over by listening. Good luck getting that from Northam.

I supported and volunteered for Denver Riggleman and I am anxious to do so again. I’ll quit whatever job I have in the future to elect Denver Riggleman to any office in America. However, Ed Gillespie has lent his ear to both Denver and Denver’s supporters.

It is easy to be cynical and it is hard to find someone more cynical than I.

A little research into my take on the 2017 primaries and you’ll realize that after Denver dropped out, my cynicism reached Herculean heights. 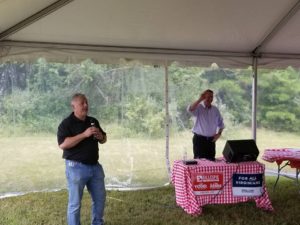 In 2017, we need to elect Ed Gillespie Governor. He will support legislation backed by the likes of delegates Ben Cline and Nick Freitas.

We’ve got Jill Vogel running for LG, getting behind the best wisdom of our farmers in support of industrial hemp. We’ve got John Adams running for AG, who has the nerve to tell supporters that he is going to uphold Virginia law, because that’s his job. We’ve had enough of activist AG’s legislating via public disappearing acts. It’s about time we had a Constitutional Conservative serving us as Attorney General.

Virginia – We have an opportunity to overcome the odds and allow our moderates and conservative legislators to do the work they have to do, and to present that work to the Commonwealth before a REPUBLICAN GOVERNOR! Those of you who supported Wagner and Stewart, believe me, under a Democrat Governor you will get no ear. Wagner is damn right about the importance of infrastructure and vocational job training. There are hundreds of businesses looking to hire workers our education system has been unable to provide workers for. Do you really want to import labor? We better listen to Wagner. Gillespie will.

We have got to support our President Donald Trump in curtailing illegal immigration and sanctuary cities, just as Corey Stewart demanded, and Ed Gillespie is listening. He’ll get her done.

One of the best events I’ve been to this year was a fundraiser for Delegate Nick Freitas, where Martha Boneta, Senator Bryce Reeves, and Denver Riggleman got behind a liberty-agenda that will benefit all of our beloved Commonwealth. Each of these advocates for liberty are supporting Ed Gillespie for Governor, because Ed Gillespie simply will not stop talking to them and to us. He just wont’ shut up. He simply will not ignore us, no matter how pissed off we are that our candidate lost – there is Ed Gillespie with an outstretched hand and a question or fifty.

The Corey Stewart, Frank Wagner, and Denver Riggleman voter will have a seat at the table when Ed Gillespie is Governor.

Those of you who follow the TEA Party in Virginia, know that Gillespie has been after us for three years! Not with demands, but questions and an open ear. Those of you wondering why Gillespie got so many conservative endorsements…well, because he listened to them.

Look, I think the next several years are going to be hard. Call me cynical, but I think Frank Wagner might be right that in order to compete with our neighbors, we’re not only going to need tax reform, but tax increases. Stewart, Riggleman, and Gillespie disagree. I pray they are right.

Do not be deceived. Under our Democrat Governors, we have bridges about to fall down all over the Commonwealth. They aren’t cheap. Aubrey Lane is looking to spend as many federal funds on railroads we don’t need and Washington D.C. doesn’t care about our bridges. Period. People risk their lives over the Robert O Norris Bridge every day. Click the clink, join the page, and embrace the movement. McAullife is risking our lives on bridges that can hardly stand.

I need all of you on board.

Do you know how long I waited to see Republican mainstream candidates embrace liberty-activists? I saw it Saturday. We’ve got to stop listening to FOX News and CNN and realize that we’re making progress. Hell, even my populist “friends” with whom I share a love/hate or just-hate relationship with find themselves with a seat at the table in 2017 in Virginia.

We can change the course of our history. It’s going to be hard. Very hard. Damn near impossible.

However, if all of you get behind Ed Gillespie, Jill Vogel, and John Adams, we will recover our economy from its annual descent. We will find ways to engage Millennials in our new economy. We can do this. We just need the right leaders. These leaders are willing and able, if you’re willing to get behind them. Frank Wagner, Denver Riggleman, and Corey Stewart didn’t disappear because they lost. They became the voices of the people before the next Governor of Virginia.

BOOM! Imran Awan Had Access to Every member of Congress — SOLD SECRETS to Foreign Agents!

Truer words were never spoken, Take it from someone who works a busy local government office. The difference between the Mcdonnell administration and the the present one is the polar opposite. You will have no ear. This governor could absolutely care less.

What? I called downtown I don’t know how many times to the McDonnell regime. The proof? Who was listening when I called over and over and complained about HB 2313, the Republicans largest tax increase in Virginia history?

I would have been far better served by calling “Dial A Prayer” than to call the McDonnell regime.

Never, never, never, let either political party control all three branches of elected government at the same time. Just look back at McDonnell’s regime. If that doesn’t do it for you? Then just look at Washington DC these days. Completely, utterly, dysfunctional.

I don’t care about Ed’s past as he broke no laws that I know of. I do care that the LT Gov candidate is dragging Gillespie and Adams down. Reeves is under pressure no doubt to drop the issue about the shitty ethics displayed by Vogel because it would hurt her chances. She crossed my line and I hope Reeves can send her packing to her 7.5 million dollar fixer upper. Ethics, BS!

Reeves has no case against Vogel period. He can’t get past the fact that a woman whipped his ass. Reeves is a legend in his own mind. As someone with far more law enforcement experience than Reeves,I resent his constant investigation to nowhere he whines about in the Wash Post to keep it alive. Only his buddies who are all part of his scheme keep trashing Ms Vogel. Everyone has figured it out already that he has nothing against Ms Vogel.

It appears you have the ass part covered.

Forgot to mention that Reeves could not even win in PWC where he had all his buddies in the Va HOD helping him and where he was once on the PwCPD. He had his ass handed to him in PWC.

Denver Riggleman is one of the finest persons ever. Great patriot.

Why do we need a tax increase when everyone is bragging about the $132 MILLION surplus? Maybe a little “tax reform” in the style of a REFUND would be better!

You don’t hear of one Republican saying let’s send the Fed our surplus to wean Va. out of the feeding frenzy of the Federal Government.
Yes Va. Republicans want , need and desire Federal money coming to their State even if that State does not need it.
We have a surplus and Executive order 24 go figure
We Contractors had a Surplus with DPOR in 2012 under McDonnell and 200 violations issued by McDonnell Administration and not one investegation?

Where is Sarvis? Surely he is going to pop out of a cake? He must be somewhere in one of those pics? Is that him behind that tree over yonder? Where you going to be in another year or two?

Washington DC is collapsing under Republican rule and you blow smoke up our asses about Wittman and Gillespie being super hero’s?

I get that some folks have a problem with Gillespie’s past…but to suggest that Northam would be the “same” is just nonsense.

SBT said ” believe me under a Democrat Governor you will have no ear”.
Let me outright personally combat that unfounded comment.
I discussed my concerns (of illegal contracting/employment) with many R&D Delegates and Senators prior to our current Democrat Governor.
One Senator asked “who have I spoken with” When I had came upon one name they immediately said stay right there.
I can’t help but believe this tenacity has lead to the implementation of of some of the notification policy within the Executive Order 24 (from JLARC 427) recommendations.
Now here we are today with this story, we must cut Regulations.
If TEA Party and so called Conservatives want to cut Regulations why is there Republican Randall Minchew HB253?
You Republicans, Conservatives and TEA Parties want to FORCE a Individual to purchase Workers Compensation Insurance prior to a Contractor’s license application being filed with DPOR. What purpose would this Republican imposed Regulation achieve?
If this bill had one ounce of credibility why does it not impose the requirement of a Va. Employment Commission Account for those potential employees?
I look forward to writing a big thank you to Governor McAuliffe for having a ear when all the Republicans ran away from this issue.
Vote Northam to continue the quest to broaden the base of legal employment and tax those illegal employers.
What is Ed’s policy on EO24?
Our Freedom will allow you to post it.