1. Barbara Comstock will crush John Foust by 8-12 points. Comstock has run a fantastic campaign, and has shown over and over again that she outclasses John Foust in every way imaginable. Foust has been a visibly desperate and ineffective candidate, and on a long, slow decline ever since the Virginia blogosphere started reporting on his overtly sexist remarks. (It took a while, but the newspapers eventually realized it was a real story). As I wrote back in August:

Here, when Foust accuses Comstock of never having had a real job, not only does he demean and denigrate tens of millions of women who HAVE HAD those kinds of “real jobs,” he does it in service to a narrative aimed at painting Comstock as something less than a “real woman.”

I’ve got news for Foust: Not only has Barbara Comstock had real jobs, like raising a family and serving her country and community, but she’s a real woman who is going to kick your backward, old fashioned, sexist ass in November.

Sealing the deal? Mark Warner and Tim Kaine canceled their GOTV rally with Foust, recognizing a lost cause when they see it. Meanwhile, Barbara will be joined at her rally tonight by Ann Romney and Ed Gillespie—who clearly knows a winner when he sees one.

2. Republicans will take control of the Senate. (Not an original thought, I admit). There’s been lots of talk of a GOP “wave” this year, and while I don’t doubt that there is a huge enthusiasm gap between the parties, this hasn’t necessarily translated into polling results that show a historic shift. Instead, we’ve got a lot of tough races where numbers are closer than they would be without the enthusiasm gap, but no clear indication that the wave will come anywhere close to being a tsunami. I think we’re looking at a Senate majority of 53 seats, maybe 54 if my next prediction is right.

3. Ed Gillespie will win. Maybe I’ll sing a different tune on Wednesday, but I think his strategy has been just right. Some people have criticized his campaign for being too low key. I think this is probably unfair for two important reasons. First, there has been relatively little attention paid to this race, given the supposedly insurmountable 29-point deficit Gillespie faced at the beginning of the campaign. There’s only so much a candidate can do to overcome the media’s indifference to what’s assumed to be a pre-ordained race, even when the incumbent is (or likely will be) subject of a federal probe into potential bribery. Just imagine how much more press Dave Brat would have gotten last spring if it wasn’t assumed he’d lose by double digits. 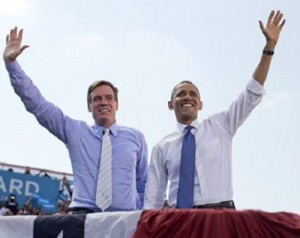 Second, when you’re a challenger in an election where your opponents are deciding where in the country to invest over $1 billion in campaign cash, you don’t necessarily want to come on too strong too early. Gillespie saved his warchest for when it mattered, and when it was too late for national groups to pile on to the millions Warner is burning through to halt Gillespie’s momentum. If the word I’m hearing about internal polls are true, Warner’s decision to finally take Gillespie seriously may be too little, too late.

The latest public poll from Christopher Newport University has Warner at +7. That same shop had McAuliffe at +7 in their final pre-election poll last year. Ken Cuccinelli outperformed that poll and came within 2.5 points of winning. Taken together with a likely oversampling of Democrats (seriously, how can a pollster in this environment assume more Democrats will vote than Republicans?) and some internal numbers showing Gillespie is actually ahead, I think the Gillespie momentum has reached its peak and that Ed pulls off a close win tomorrow. Let’s hope it’s no so close that we don’t know who our next Senator is until next month.

If Gillespie topples Mark Warner, it’s going to be the headline emblematic of a very good night nationwide for Republicans.

UPDATE: I’ve been asked why I haven’t made certain other predictions. The answer is that there’s no real reason other than economy of time. All Republican incumbent Congressmen in Virginia will cruise handily to re-election, as will Democrat Bobby Scott in the 3rd. Frankly, I’m not even sure which of these gentlemen face actual opponents. Micah Edmonds and Suzanne Scholte, despite seriously outperforming in heavily Democrat districts, will both come up short in their bids to replace the retiring Jim Moran in the 8th, and displace the dysfunctional Gerry Connolly in the 11th, respectively. Edmonds and Scholte have done a fantastic job in very difficult territory, and both have done great service to the Party. Scholte in particular has shown a level of vigor in her campaign that is truly inspiring. But, in the end, these districts are where the Democrat turnout operation is at its highest concentration, and where having Mark Warner at the top of the ticket is an advantage for them. Warner and OFA are relying heavily on boosting the Dem vote in the 8th and the 11th, and unfortunately this will likely present a mountain that’s just too high for any Republican to climb. Hopefully I am wrong. Like I said, I admittedly don’t have a great track record at election prognostication.

[…] having outperformed. (Gillespie went on to nearly upset Sen. Mark Warner, to the surprise of most, but not all, […]

[…] all observers never predicted Ed Gillespie would even come close to beating Mark Warner last night. All but one, if memory serves. So no one really expected that we’d find ourselves now in a similar situation to the days […]

The first Senate races to watch are NH and Virginia. If we take both of those, we take back the Senate with 54 or 55 seats. In the House we pick up 11 or 12, flirting with our all time high of 246 Republican seats. We could hit that tonight. We should end the night with 27 or 28 Governors. It’s going to be a GREAT night to be a Republican. Looking forward to seeing all my friends at the Comstock Victory Party in Ashburn. I will be doing some live blogging with pictures so tune in often tonight to The Bull Elephant for news from the 10th district and around the state.

Best forecasts: All incumbent Members of Congress will win re-election. Comstock is favored to win the open seat in VA-10. The VA-Sen race could come down to fewer than 2%…however, I don’t know how accurate that is. If someone were to have me cornered and not let me go without picking one side or the other, I would give the edge to Warner, but I would not be complaining one iota come Wednesday morning if Gillespie wins!

Steve the only thing I would disagree on is Warner?

A previous article posted Friday on BE, using a questionable poll, still showed Mark Warner ahead, and outside the margin of error?

The other polls showed Warner leading by almost double the points as the “Cheney” poll.

When you speak of waves, watch for the tidal wave coming in 2016, and it will not be a Republican tidal wave!

It is waaay to early to speculate on what 2016 would look like. Too many factors that have not been decided yet need to come into play — nominees, possible 3rd party runs, conditions of the economy, foreign policy, etc. There’s no legitimate way that you can say if there will be a wave or a whisper.

You can do whatever you want. I’m just suggesting that it’s a bit early. That might be what happens in the end….of course at this stage, it’s just as likely that the Dems will get their donkey’s handed to them in 2 years. We just don’t know.

Two months ago, polling found Gillespie trailing Warner by 22 points, a month ago, it found Gillespie trailing by 12 points, last Friday he was within 7 points. Warner doesn’t seem able to move undecided voters in his direction and appears to have actually lost some support stuck at 48.5 percent in the current RCP average. In this environment, where the voters are up in arms against Obama and his policies, and establishment Republicans are successfully running on the content free message of “if you dislike Obama vote for us because we aren’t him”, Ed will STILL likely be the odd man out. Look at where the Republicans are struggling, Tillis in NC, Roberts in Kansas and you will find questionable establishment candidate selection and a state party organization that holds its conservative base in disdain. If the state party leadership had made even the slightest attempt to heal the breach it largely caused by its own actions Ed might have had a shot rather then the 2-3 points he will come up short. For those that will celebrate on the success of a “close” race just remember an incoming tide will bring even the most inert debris to shore. Like most prognosticators I may have to eat my words on Weds. but I don’t think that is in the cards.

Did you purposely misspell RPV as VPR? Even though I am extremely annoyed with the likes of Bill Bolling and others who did not come out in support of our Republican Nominee for Governor because he was too conservative, I am not going to be a hypocrite and sit this one out. Ed Gillespie is not my first choice, but he’s a hell of a lot better than Warner. I will be voting for him tomorrow and working the polls all day.

no thanks mistype (corrected) and I will be at polls as well but things still need to change soon.

Here’s hoping you are right, Steve. It’s been an usual campaign.

FWIW, this morning’s Roanoke Times is running a front-page AP article suggesting the Ferguson, MO police created a media no-fly zone to hide the facts behind the shooting of Michael Brown. That in itself indicates a certain desperation in Virginia’s Progressive media circles.

So let’s do the turnout thing and then repeal ObamaCare and secure our borders.

You have lost touch with reality when you say “repeal Obamacare”. That’s not even possible with Obama as president.

President Obama may very well double down on policies and behaviors that will drive his popularity even lower, and we may see a public enraged when their health insurance premiums skyrocket next year after the delays end — BC/BS notified me that my individual policy is rising from $344 to 822/mo. The effect on that much disposable income disappearing — times millions — and so suddenly, might be interesting.

It’s not necessary for Barack Obama to sign a “repeal” bill to effectively end ObamaCare’s life. There are other possibilities, and I’m sure our wily Republican legislators can find the ways — the question is whether they have the will and courage to make it happen.

Repeal may not be possible but defunding is.

If the Halbig, etc decisions stand, and federal exchanges can’t provide insurance subsidies, it’s going to “defund” a lot of pocketbooks, too. 😉