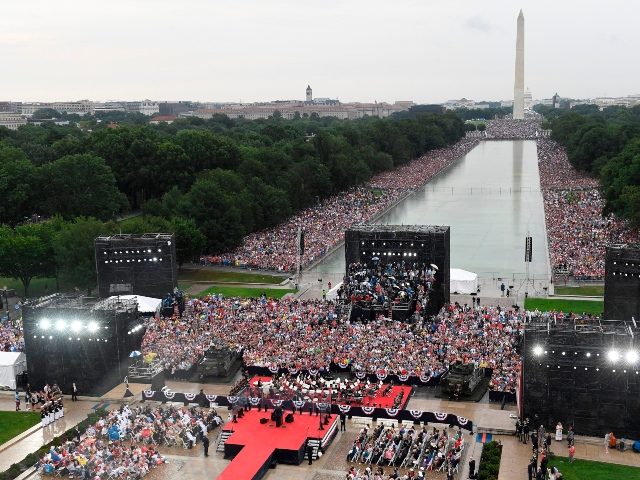 After too many decades of politics about the only thing I can attest to with absolute certainty is that nothing is certain.

With this in mind, on July 4th my wife and I headed off to the National Mall in Washington, D.C.,  to hang out with tens of thousands of other folks at the “Salute to America” celebration, hosted by President Trump. We had never been to a Trump event of any kind and wanted to get a first-hand sense of what’s happening to the President’s popularity and re-election chances in 2020, especially in light of the negative spin concerning the next elections (still 500 days away) and his supposedly low polling numbers.

My wife and I arrived via Metro at the Foggy Bottom station around 4 P.M. in a steady drizzle punctuated by heavier rain showers. As we started the six-block march to the Lincoln Memorial, we ran into fairly heavy pedestrian traffic heading against us towards the Metro, whom we assumed were headed home after the city’s parade. However, I was surprised to note that a good portion of the crowd was wearing MAGA regalia of one kind or another.

The pedestrians headed to the Mall that my wife and I were part of was roughly equal to those headed the other way,  and I began to notice that many were also heavily identifiable as Trump supporters, and a very sizable portion were young adults.

Seeing so many people apparently leaving the area before the Salute to America even started was a bit disheartening at first, as the mainstream media complex had been blasting out predictions that the turnout for “Trump’s” rally was going to be sparse.  I was also surprised that when we arrived at the designated security checkpoint, there was no wait at all.

When we had found a decent location to park ourselves and get arranged, I had an excellent vantage of the sides of the reflecting pool where unticketed attendees were standing.  The area was probably only one-quarter full.

However, within thirty minutes, in spite of several downpours, the crowd size started to fill in dramatically, and the line to get in stretched down Constitution Avenue several blocks.

I milled around for about an hour before the event kickoff, and my anecdotal take away is that the enthusiasm factor for this president is off the charts. As with the rally’s that he has continued to have, the attendance is just jaw-dropping, and the mix of people coming out is unlike anything I’ve seen in politics since Ronald Reagan. I have not seen nor read about any current candidate that can command an audience like President Trump.

In my “walk-about” I talked to plain ‘ol Republicans from all over Virginia, and several other states, and there is no indication at all that I can find that they weren’t excited about supporting this President. To a person, they were well informed and passionate about winning in 2020.

But the most encouraging thing to my mind was that non-Republicans outnumbered Republicans by a wide margin. I mingled a lot and was frankly reinvigorated by what I saw and heard in both the ticketed area and in the non-ticketed area. (We were in the ticketed area for the military services, in our case the Navy, and there is no question whatsoever that the active duty military support and love, this President.) I ran into a few acquaintances from Fairfax County that I know to be more moderate generally, and they too were supporting the President in 2020, without reservation.

A couple of observations from the crowd. There was a surprisingly large mix of ethnic Americans at this event, and many of them wore MAGA hats or other identifying clothing. There was a noticeable mix of African-American, Asian-American, Latino-American, and also lots of college age kids and young adults. This mix was much broader than any party event you’ll find.

My wife and I sat next to a California couple, and they reported that even California Republicans are very excited about 2020 and that there was not a lingering never-Trump sentiment that they were aware of, or that was getting any media attention.

(Immigration was the buzz word with these event goers, at least. Everyone that touched on policy was very animated by the border chaos, and share the President’s frustration. They’re mad at the courts, and Congress, for disregarding what they all believe is the vast majority of opinion in the country on the crisis at the border, and for throwing up road block after road block on everything the President has tried to do.)

This is all an anecdotal report from the field, of course. While I doubt POTUS will ever be ahead in the polls, just as in 2016, from what I’m seeing based on his previous events, and the massive turnout and incredible enthusiasm for the Salute to America celebration, in spite of the weather, is that 2020 may be a great year after all. The tremendous support for President Trump on the ground simply doesn’t compute with the poll numbers, nor can it be ignored as an indicator of where the public’s trust lies.

One thing about the event itself; this was Donald J. Trump at his best. It was a well put-together speech about America, and what makes it the greatest nation on earth. He extolled the volunteerism and vision of Americans doing extraordinary things, and he praised our military in a way that hasn’t been done in a long time. There was not a word of partisanship, nor was there any policy statement. Nor did the President mention himself or the upcoming election, or the ongoing struggles he is having with Congress, and his own party. (Here is a link to the speech.)

It was all about our great nation, and after the last few weeks of listening to those who would be president if they could, it sounded all the sweeter.