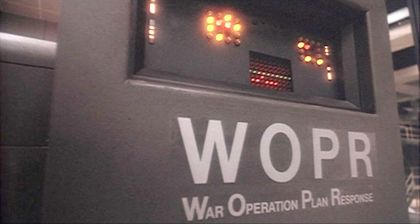 Remember the 1980s movie Wargames? It was the computer sci-fi thriller where Matthew Broderick’s teen-aged character has accidentally dialed into the DoD’s War Operation Plan Response supercomputer – a.k.a. “the WOPR” – which was originally programmed to predict possible outcomes of nuclear war scenarios. The WOPR also controls our entire global missile defense and retaliation system, from which the man-in-the-loop has been removed. But Broderick’s character doesn’t know any of that. He just wants to play computer-games, so he chooses “Global Thermonuclear War” from the WOPR’s list. He kicks the game off by telephone.

Somehow, though, the WOPR’s game-protocol is mixed in with our actual NORAD launch detection system, causing the war-room that’s encased inside a Colorado mountain to believe an actual Soviet attack is underway. The war-room steps through the various DEFCON levels – 2, 3, 4, 5 – until we are on the brink of launching an actual retaliatory nuclear strike at the Soviet Union. Things get pretty tense until the WOPR’s reclusive inventor shows up to tell officials that the apparent Soviet attack evolving on the giant display screens is just a “fantasy.” He convinces the commanding general to stay his hand and ride out the frightening images of nuclear bursts across the USA, depicted by the simulation’s displays.

After the simulation’s “game” concludes, phone calls to supposedly destroyed locations affirm that there has been no actual attack, and that all is well. This produces wild rejoicing in the war room, as the commanding general orders the retaliatory missiles to stand down and the bombers to be recalled.

But it turns out that the “game” isn’t quite over. A technician realizes that the WOPR has blocked all manual intervention and has invoked an algorithm to find the launch codes, so it can launch our offensive missiles – for real. A gripping scene ensues, as the WOPR inexorably steps through discovery of the codes, digit by digit. Finally, a solution is found to halt the WOPR’s seemingly unstoppable march to genuine war.

I cite this movie-scenario because it seems to mirror the situation we currently face, following the disastrous economic shutdown that was invoked to “protect” us from the mega-deaths the COVID-19 virus was supposedly going to cause. On the advice of medical epidemiology experts, the governors of at least 40 of the 50 states ordered shutdowns – to varying degrees – of business, education, sporting events and other types of meetings for most of the past two months. This has produced an economic recession that some reporters are (gleefully, it seems) calling a Second Great Depression.

As time has passed, however, we have learned several important things about the COVID-19 virus (not a complete list):

In the past week, predictions about damage to the economy if the shutdown is prolonged, as well as encouraging reports from states which have reopened for business – e.g., Florida, Georgia, and Texas – have sparked optimism and a nationwide move to get back to work and return to normal life. Even determinedly pessimistic epidemiologists – e.g., Dr. Anthony Fauci – have started talking about the need to reopen and the unlikelihood of a “second wave” of the virus.

This spate of happy talk has produced a modest rally in the investment markets and smiles among the 50% of Americans whose positions in those markets have been hammered by the induced recession. President Trump is cheering the country on, encouraging people to get back to work, and promising that a great recovery lies ahead. A spirit of hope is in the air. It looks like we’ve weathered the storm, and happy days will be here again.

But not so fast. Like the WOPR in Wargames, working behind the scenes to transform a game into a real war, a determined political cabal is working to keep the country from achieving a complete recovery. Principal participants in this effort are the governors of five key states – New York, California, Illinois, Virginia, and Michigan – which are still mostly shut down. Since in normal economic times these states produce nearly a third of the nation’s GNP, their prolonged shutdowns threaten to cripple the nation’s attempt to recover.

The Deal (as Mr. Trump might say) is that the prolonged economic closure of state economies – now passing two months for the above-named blue state holdouts – is no longer about protecting citizens from the virus. Now it is entirely about politics – specifically about the presidential election just 5 months hence.

Experienced pols know that any recession – even a mild economic slowdown – during a presidential election year is almost always blamed on the sitting president, if he’s running for re-election, or on his party, if he isn’t running. Under the threat of millions of possible deaths – projected by bogus “models” – the mad rush to close the activity and commerce of 80% of the states, including heavy hitters like California and New York, has tanked the national economy, thrown tens of millions out of work, and crashed stock markets below their levels when Mr. Trump took office.

Although a child could have predicted those results, Democrats and Big Media (but I repeat myself) act like it’s all a total surprise that must be the president’s fault. It is – as I have noted in earlier articles – the election-year “miracle” that Democrats had fervently prayed for (if they actually do that). And it is the Endgame of the great pandemic-scare of 2020 – like the WOPR going for total war, while the war-room is celebrating.

Thus, with the means to cripple the economy through the November election in their hands, true-blue governors have zealously shackled their state-economies – all in the name of keeping their citizens “safe,” of course. Meanwhile, they act like know-nothings about the financial harm they are visiting on millions of citizens who want nothing more than the chance to get back to work and provide for their families.

I continue to be amazed at how cavalierly those governors treat the failure of thousands of small businesses in their states. (Oh well.) If no other good comes from the wreckage they have caused, at least citizens have seen how little Democrats care about the workers and small business owners who are the real backbone of the country.

Governor Andrew Cuomo (D-NY) – always a leader in his field – has taken shutdown-politics a step farther by sending the message that he might keep the New York economy shuttered until Mr. Trump and the Congress agree to cover the red ink in his state’s government and pension plans. It’s a new level of political hardball that even Chicago Mayor Richard Daley never played. (Is this a great country, or what?)

What does all this mean? If it’s allowed to continue, it means big trouble – not just for Mr. Trump and the Republicans, but for the whole country. Letting governors get away with sacrificing their states’ economies in order to tilt a presidential election is a trend so dangerous that it’s impossible to overstate it. And letting a governor extort money from the federal government by holding his state’s economy hostage – even more so.

This is a crisis of the first water, and it must not continue. The American people need to remind their leaders that the governance they exercise does not depend on their own whims, but on “the consent of the governed.” And if they fail to heed that truth, we need to get their attention. This might not be easy, but it is necessary.

Endgame was last modified: May 29th, 2020 by Woody Zimmerman