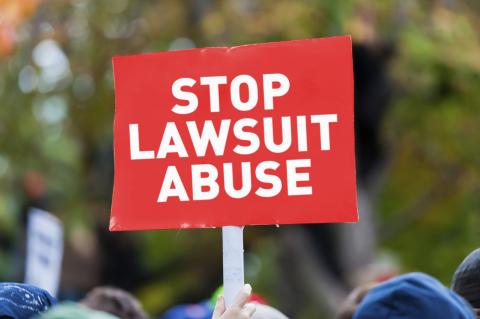 I learned as a former County Supervisor and Councilmember, and editor covering federal regulatory agencies such as FDA and EPA – that regulation must achieve “balance,” so as much as I am a conservative, I believe regulation of the environment, food and drug safety and protections for investors (to give a few examples) are needed.

However,  I was quite concerned when I learned recently that there is litigation fomenting across the nation – and potentially here in the Old Dominion – to hold the companies that provide us electricity and heat are being sued to hold them accountable for their share contributing of climate change.

Earlier this year,  the city of Baltimore, seemingly at the behest of environmental groups, filed a lawsuit against oil and gas companies that do business in the city seeking to hold them accountable for contributing to climate change.  There have also been similar suits filed in New York, California, Washington State, Rhode Island and Colorado. While we should certainly strive to curb emissions in an effort to address climate change, these lawsuits seem more likely to make the lawyers involved a great deal of money than actually helping the environment.

I also believe it’s bad policy to use the courts to achieve a political end result. Our response to the effects of climate change should be determined through policies adopted by the state and federal legislative branches, not the courts.

How would a judge be able to determine the degree of culpability in order to assess the amount of damages a company should be charged? Is Company A responsible for 20 percent of climate change problems and Company B for 80 percent? Or vice versa? There is a myriad of determinations that a judge is just not suited to make. In short, we vote for legislators to tackle these types of issues, not judges.

In addition, I do not believe that local government should be spending tax dollars on such suits.  I cannot recall a time in my 10 years in local elected office in Leesburg and Loudoun County, when we went to court against private companies unless they were doing something that SPECIFICALLY threatened the livelihood of the municipality, and more often than not, our use of attorneys was defensive (i.e., when we got sued).

I would really not like to see the good talents of various county, city and town attorneys in Virginia, or outside counsel, being used to litigate on national and international matters, unless the municipality or county’s interests are threatened.

A lawsuit will not slow the impacts of climate change, but it could cause economic strife that would ripple out to impact the entire state. We cannot hold individual companies accountable for the effects of climate change because it is a global phenomenon, and as I learned years ago from covering the EPA, air and water pollution doesn’t abide by municipal and state boundaries, so why use frivolous litigation on this?

However, I would hope elected officials in Virginia would work with the business community to promote economic growth through policies that allow them to generate capital and create jobs while at the same time protecting our environment.  Misguided lawsuits is NOT the realm of local government or else Virginia’s successful balance will be damaged.