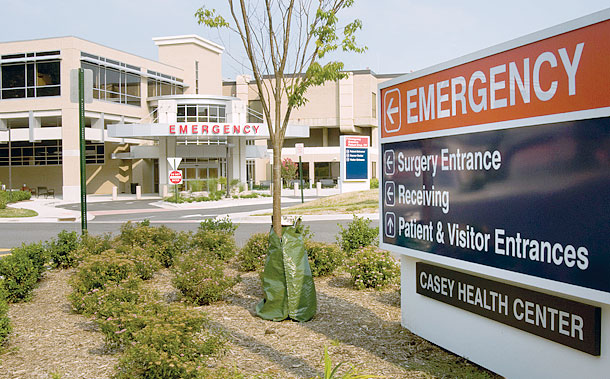 As an older person, going to an ER room in Northern Virginia (NoVA) is an exercise in costly futility unless you are on death’s door or are prepared to wait for endless hours while younger people are being treated for colds, high fever, bleeding fingers and toes, and other accidents which occur in the exercise of our daily human lives.

Few Americans know or care that the Affordable Care Act of 2010 or Obamacare had labeled those over a certain age as “units.” If patients are young, they probably think themselves immortal – they would never get old, therefore such “unit” labeling does not apply to them. The stark realization hits you like a ton of bricks – you have become an older “unit” that can be ignored because government formulas deemed your utility to society too close to zero.

Most hospitals in northern Virginia post on electronic boards the number of minutes a patient must wait before they are triaged and/or seen in an ER. That may appear comforting and caring about one’s health and time until you actually set foot in the ER and reality replaces clever and deceptive advertising.

I had to go to our local NoVA ER this week. After the initial data and insurance screening, triage, and waiting for three hours to be placed in a room and to be seen, I decided to leave.

The waiting room, triaged by two people speaking English with heavy accents, kept getting more crowded with illegal aliens who did not speak English and required a translator in their respective dialects. Over and over I heard the question, “Do you speak English,” and calls made over the loudspeaker to a phone translator or to a hospital employee who spoke that language. It was a veritable tower of Babel.

I felt alone and lost in a sea of people with sick children who could have been seen quickly and much cheaper by a local Emergicare doctor, while my chest was hurting like hell and needed immediate attention.

It is sad that, after paying half of my income in taxes and being forced to purchase three medical insurance premiums, I cannot get medical care in my own country. Illegals flood the emergency rooms in northern Virginia. As human beings, they have a right to be treated too but must I pay for them and must my medical care become secondary and tertiary to their needs?

Thirty years ago there were no Emergicare facilities where we lived and ER wait was extensive in the small southern town. I had to wait once eight hours when my child had 104.5 F fever before we could see a doctor. In that case it was because of the shortage of doctors – nobody wanted to practice medicine in a small town.

Locals had to travel 100 miles or more to the nearest larger town in order to seek medical care.  People were really nice in the local ER then but my daughter could have had a seizure. I gave her liquid Motrin but the fever was not coming down. She needed an antibiotic shot right away. She eventually got it but I am saddened to this day when I think about the length of our wait and what could have happened in that time.

Going to an ER was a big deal back then as charges were huge and people actually had to pay them immediately or over time. Today Americans and illegals flock to ERs for convenience. They use emergency rooms as their GP doctor because they have no idea how much it cost to use emergency services, they don’t care, and someone else is paying for their visit.

While we pay medical bills of illegals from Mexico and Central America, consider the situation when an elderly American residing in Mexico, was taken to a private hospital in Guadalajara recently by her American son. Following a fall and arrival at the hospital, within 30 minutes, the only American patient got a CT scan, two X-rays, blood tests, and specialist doctors to read the results. The hospital did not accept Medicare Part A insurance. The admission fee alone was 90,000 pesos ($4,500). Because the test readings were within normal range, the son asked to have the IV removed and she was discharged. The IV removal took three hours. The son had to leave his passport “hostage” with the promise to pay on Monday when the banks opened. The actual medical bill was 12,200 pesos ($610).

According to the Associated Press, starting on January 1, 2019, “Medicare will require hospitals to post their standard prices online and make electronic records more readily available for patients.”

“Seema Verma, head of the Centers for Medicare and Medicaid Services, said the new requirement for online prices reflects the Trump administration’s ongoing efforts to encourage patients to become better-educated decision makers in their own care.”https://wjla.com/news/nation-world/medicare-will-require-hospitals-to-post-all-prices-online?fbclid=IwAR0ZhFVXxkyuRf64csFSMQV4x29X39xOJX0RFPjjqOWnSDeuapfe_JwQgkA

Americans should educate themselves before heading to the nearest ER, but what about all the illegal aliens who don’t speak English and who flood emergency rooms because they know medical care is free and is paid for by American taxpayers?

Eight hours?! That is NOTHING! I have a disabled fiancee and witnessed outrageous discrimination in favor of able-bodied illegal invading aliens over and above even our disabled. Many is the time we have sat and waited for up to TWENTY HOURS – and that’s after I put in a 10-hr working day with a 3-hr commute. This is 30 years experience speaking. Let the illegals die in the gutter! Better yet deport them all, including the so-called “Dreamers.” These leeches lie, cheat and steal from American taxpayers, including our disabled who live in pain 24/7. Americans are being forced against our will to pay for illegals which is financial SLAVERY. Send them home to their third world shitholes to live, fight, sacrifice, work and die IN their shithole FOR their shithole to make their lives better. Otherwise they will overrun our country and turn it into what they left. They even have a word for it…”Reconquista” or “reconquer” where they move in and start overbreeding. Illegals receive free food, free housing (Bank of America and Citibank even give HOME LOANS to illegals with less documentation required than from Americans), free cellphones, free education, and free medical.
Illegals are locusts. They move, multiply, exhaust resources, and move again. And continue to overbreed everywhere they go. Want to know why they flee their third world shitholes? Because they MADE them that way!