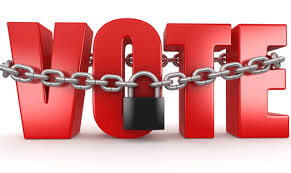 The Boyer family of Campbell County has worked tirelessly for years to elect republicans to office, including their 5th district Congressman, Robert Hurt.  They are the backbone of Campbell County Republicans.  Tim Boyer is the former Republican party Chair.  Last night the Boyer family was shown the door when they were slated off the 5th district and state conventions.  Numerous other life long Republicans will not allowed to vote in the upcoming conventions.  Mike Thomas, Vice Chairman of the Republican Party of Virginia, presided over the meeting as parliamentarian.   Tim Boyer posted the following on his Facebook page last night:

Folks, it happened again. Well over a hundred county democrats came out tonight for the Campbell Republican Mass Meeting, under the leadership of establishment “republicans”, took over the meeting and slated off the vast majority of the delegates to the 5th district and State GOP conventions…almost every single delegate slated was a long-time conservative Republican activist. Guess who served as their parliamentarian after taking the meeting over? None other the First Vice-Chair of the Republican Party of Virginia, a certain Mike Thomas. Thanks Mike, for all the ticked off, disaffected and now disenfranchised former Republicans in Campbell County. Ripping the party apart and voting them all out of the committee should really contribute to electing and re-electing GOP officials down here. Most of the people who were denied their right to vote tonight have worked their butts off for Steve Newman, Kathy Byron, and Matt Farriss for years and years, and this is the thanks they get. One would think RPV and others might want to think about how their actions affect their electoral chances before acting like democrat thugs, or could it be that doesn’t concern them….. Young Guns on the menu, Mike? Virginia Beach, Richmond, Charlotte, Now Campbell, Fauquier next. The slate-fest continues, and I’m finding that some people I thought were my friends may have been part of it as well. Politics.

Derick Dickens of Lynchburg also attended the meeting and reported,

Politics makes sense when you break the word down. Poli means many. Tics are blood sucking parasites.

I, for one, experienced the parasites first hand tonight.

At the Campbell County Republicans mass meeting, there was a successful attempt to win the leadership of the board by recruiting democrats to infiltrate the committee meeting and to take over. Lying about people in our community and mis-characterizing others, they used scare tactics to drive democratic voters to the meeting in order to vote for people who do not reflect conservative values. The left won.

The candidate they elected gave a glowing speech about being inclusive and not divisive. Only then to jettison every other delegate nominated to represent our county at both the state and regional Republican Meetings. Both my wife and I were nominated as delegates but was never given consideration because we were not a part of the hand selected left leaning group in charge. In fact, every person nominated could have represented the county, but because they could not guarantee a left leaning delegation, they selected some who would ensure our agenda would not be welcomed.

With blatant lies about the outgoing chairman and the elected Republican Supervisors, they clearly used political plays designed to turn out the Democratic base in a Republican meeting to gain control, limit delegates to the Republican meetings, and to turn a solid Republican county into a meaningless county for the left.

They won! It was accomplished with lies, deceit and democrats.

I think it was educational for my children. They attended and got to see the shenanigans first hand. Tonight, they were given a new appreciation for how well the left tries to manipulate and control. In fact, I didn’t have to tell them about it, they got to see it.

Overall, tonight was a night where they saw hypocrisy… “we must work together as one” to only see two minutes later the same group trying to exclude everyone not hand selected.

Almost 600 people turned out for a meeting that normally wouldn’t get even half that number. How did this happen?  It seems Neil Vener organized the meeting and drove turnout by sending emails to the teachers and employees of Campbell county, having obtained their email addresses through an FOIA  request.  He told employees that if they didn’t turn out for this meeting, and vote the way he instructed, they would face cuts,

and ruthlessly slash the budget with no regard for the damage they will inflict on Campbell County residents and to you as faithful employees,”

According to republican supervisors, that is NOT the case, their budget will include raises for employees.  But the emails were enough to scare county employees into attending the meeting.   Scaring people into the voting booth is a tried and true democrat tactic and it worked again in Campbell County. More on the story here.

How many more counties will fall to slating?  How many more hard working republican volunteers will be disenfranchised?  We’ve already lost thousands of our grassroots voters who won’t be allowed to attend their local conventions and or state convention.  Henrico and Fauquier counties are likely to be next, disenfranchising thousands more.

Who’s behind this well orchestrated take over of our party?  Congressman Eric Cantor.  Many of us remember the rumors last year that Cantor and his “Young Guns” PAC were prepared to donate $5 million to the cause of flipping the State Central Committee from a grassroots, conservative, pro convention, committee to an establishment committee, controlled by people like Eric Cantor and Mike Thomas, a committee that would support primaries over conventions.   Primaries can be controlled by money, something the establishment has plenty of.   Primaries take control away from the republican grassroots and puts it under the control of the party establishment, something Eric Cantor and Mike Thomas very much want to see happen.  These “Young Guns” are investing their money in robo calls and emails guaranteed to get their vote out in counties across the Commonwealth where they can impose their slate while eliminating the grassroots from a role in conventions.  Grassroots don’t have the money to fight them.  The Young Guns PAC money is taking over our party and disenfranchising thousands of republicans across the state, including lifelong republican volunteers like the Boyer family of Campbell County.  Disgusting.