You want to campaign like a Democrat, Mr. Cantor? Well,  two can play this game. As Eric Cantor’s consultant, Ray Allen, just said himself in a recent email – ‘the campaign silly season has begun.‘ Eric Cantor seems to lack a moral compass as he continues to brazenly lie about his opponent. He has aggressively attacked his opponent using the most absurd Democrat ploys, including his exploitation of our seniors. Remember the classic liberal commercial that showed grandma being wheeled off a cliff because Republicans wanted to “cut” entitlements? Yup, Majority Leader Eric Cantor has ACTUALLY sunk that low. Aren’t you proud?

On the one hand we have the “old” Eric Cantor who used to say that entitlement spending is out of control and needs a drastic overhaul. In fact, he was attacked by multiple Democrat-leaning sources for stating the social security “cannot exist” and that we need to put seniors “on notice” that the cuts are coming. Yup, you heard me – Eric Cantor wants to eliminate your social security! Grandma, you better run to the polls and vote against Eric Cantor in the Republican Primary this Tuesday or Cantor is going to take your social security away! 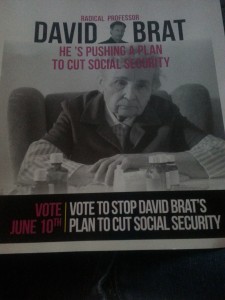 Eric Cantor lies to his constituents

Wow, now Eric Cantor is deciding for you what your America should look like – and he is going to use your social security to do it.

On the other hand we have this Eric Cantor mailer that uses these very same Democrat attacks on Dave Brat, because Brat suggested that we reform these unsustainable entitlements to make them solvent. 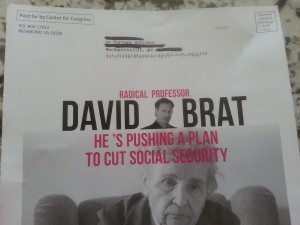 PROOF: Paid for by Cantor for Congress

It is pitiful to see the Majority Leader sink to such a desperate low as to show poor ‘ole grandma on a flyer and suggesting that Dave Brat is going to cut her social security. Dave Brat has never said any such thing. Dave Brat has argued the same points that Republicans in Congress have been making for years – fix entitlements before they implode.

Perhaps the critical difference is that Dave actually wants to reform entitlements and Eric Cantor is just bluffing for your vote! You think I’m wrong? Then why would Cantor find it so “evil” that Dave Brat wants to reform unsustainable entitlements? The only explanation is that Cantor thinks big government DC is fine the way it is and despite his rhetoric, he actually has no intention of fixing these programs to save the future of our seniors AND our children!

Based on this Eric Cantor mailer your choices are twofold: 1) Eric Cantor is using liberal tactics to lie about his opponent, OR 2) Eric Cantor is lying to America about his desire to reform social security because he really does find Brats entitlement reform ideas offensive. In either scenario you just can’t like what you see with Eric Cantor.

The Republican Primary is this Tuesday, June 10th. Polls are open from 6am-7pm.

[…] instance, here is Cantor taking a page out of the Democrats’ demagogic playbook and attacking “radical […]

Keep up the pressure on Eric Cantor. He was a nice guy when we helped him get elected, now he is only interested in maintaining his job in Washington and will do or say anything to get re-elected.

This is our best chance to start cleaning house in Washington and elect true
American patriots.

He has joined Warner and Kaine supporting everything Obama is doing to destroy our freedom. Get rid of him next Tuesday, Warner at the senate election,
and support Dr. Ben Carson for president in a couple of years. He’s a true black American whom will return our freedom and make us feel good being an American like Ronald Regan did his two terms in office.

Get rid of Cantor next Tuesday and let’s celebrate the beginning of the end for politicians, both republican and democrats, and let them know the people are taking our country back.

I’m ok with getting rid of Social Security…

Social Security is not in our Constitution. People should own their retirement accounts, not the government. The only thing the government ever did well was the military. Now, even it is not looking so great.

It is sickening and disappointing tthat Eric Cantor has decided to campaign this way. He cannot run on his record or debate the issues– The more he speaks the more desperate he sounds. It is enough to swing my vote to Dave Brat– I know where he stands and he tells the truth. This will be a refreshing change in Congress.

It’s amazing what a desperate congressman can accomplish with unlimited resources and no scruples. When will we hear the charges that Dr. Brat is a wife-beater and drug addict. Cantor may win, but he has squandered his credibility and reputation with many Republican voters for life.

Have talked to voters who were originally supporting Cantor and now are completely turned off by the negative Cantor campaigning. You may not see them openly declare their support for Dave, but they will vote for him. That’s what counts.

I’ve also spoken to many who, after seeing the repugnant campaign against Dr. Brat, have decided that Eric Cantor is part of the problem in Washington.

Thank you Jamie. The grassroots are working overtime, knocking on doors, making phone calls, and refuting the trolls on the blogs. While I’m only knocking on doors of folks who voted in the last republican primary, my experience is that Brat is leading by 5 to 1. This is very unscientific, but at least in the neighborhoods I’m working, people are just fed up with DC and Eric Cantor.

What’s your prediction on the election?

I don’t think you fundamentally understood the thrust of the entire post.

Actually, you are the one who COMPLETELY misses the irony! The video selection was purposeful.

Exactly correct Jamie. The mailers are despicable. I have one that lists (in a side-by-side comparison) Cantor as “Republican”, and Brat as “Liberal Professor”….with the insinuation that Brat isn’t a Republican, which is laughably false. (this is from “Cantor for Congress”)

RedState had an article by Daniel Horowitz that characterized Eric Cantor’s campaign as “the most dishonest campaign election cycle“. So now not only is Eric Cantor a spineless, weak, impotent House leader, but also is (through his campaign) a disgusting liar.

I suggest you try to get Radtke’s superpower of “Gleefully forgetting and/or ignoring past events and words” or you’ll be in need of counseling next Wednesday after the election.

Speaking of Radtke’s lack of followup, whatever happened at that “Pitchfork Party”?

Oh, so sorry Bruce. Care to stay on-topic? I do understand however, your desire to shift away from a critical examination of Cantor’s lies. Yes, we noticed.

Nah. I did that already with the PONR request. The typography and polish on that makes it look horrible if the official campaign did it themselves.

I love this one…I literally spit out my coffee when reading this pack of falsehoods: “Cantor IS getting the job done.: —Stop Washington’s wasteful spending—Lower taxes for individuals and small businesses—Prevent the government’s interference between physicians and their patients. Need I type more or do you get the drift? Oh wait..there is more: “A PROVEN RECORD OF BEING PART OF THE SOLUTION.”

If that mailer is paid for by the Cantor campaign, shame on him. Shame also of the designer for that extra space in “He’s”.

Since I haven’t seen the full mailer, I’ll use the Proof Or Not Real card. Show me where it comes from the Cantor campaign, please.

“radical professor”….lol, how dishonest can one get?

Strong Agree on this one. Way over the top and factually dishonest.