Eric Cantor will be campaigning AGAINST Delegate Chris Peace

I am as shocked as everyone else, but apparently Eric Cantor will be campaigning against Chris Peace when he comes up for reelection. It is even more shocking since Chris Peace used to work as Eric Cantor’s legislative aide, so I am sure this will be difficult for Chris Peace to explain to his voters. But the facts speak for themselves according to the hit piece that Ray Allen recently produced for Eric Cantor… 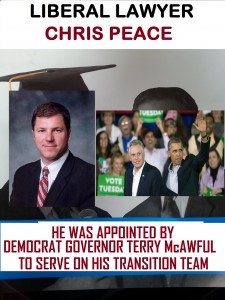 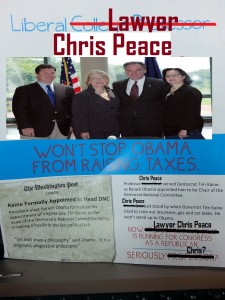 Furthermore, Chris Peace took his picture with Democrat Tim Kaine as Barack Obama appointed him to be Chair of the Democrat National Committee. Chris Peace just stood there and posed with Tim Kaine for a picture when he knew Governor Tim Kaine tried to raise our insurance, gas and car taxes.

Wow, that just ain’t right. I can’t believe that Ray Allen and Eric Cantor would play dirty politics like that and throw Chris Peace under the bus. Somebody should stand up to the Allen/Cantor lies and defend Chris Peace against these ludicrous allegations. Who is with me?

Eric Cantor will be campaigning AGAINST Delegate Chris Peace was last modified: May 9th, 2014 by Jamie Radtke

I was sorely tempted today… but alas! The old hymn, “Yield not to temptation” was purifying my soul as a walked by Ray Allen. The temptation was to put my face in his and with gentleness inform him about how disgusting his pieces against Fred Gruber and against Dave Brat are. I had heard of his temper, so maybe I was just yellow. I declare “HE IS NOT ONE OF US!”
In my teens and 20s I studied communism’s playbooks with the eye of a Conservative Christian. One Karl Marx conquer the West strategy was to discover in an opponent on some minor flaw and attack as if it were a major flaw. This strategy has been effectively used by all kinds of leftist groups and is a centerpiece of radical homosexual attacks that demonize good people. Ray Allen uses this Marx tactic and should be banned from the Republican Party.

Stomping your feet and holding your breath until you turn blue would be just as effective and also much funnier than this article.

Be sure to videotape that for us and post it here. We’d love to see you hold your breath… 😉

One question. When Gov. Kaine let office in Jan. 2010, he left incoming Gov. McDonnell a proposed budget of about $75B. Now, the same people, lead by HB 2313 Howell, have a 96B budget on the table that they want McAuliffe to sign.

Now, are the Politicians who created, supported, and voted for these massive budget increases what you people call Conservatives?

You know, I think the problem is that the far right is just to far left for me.

Parody? Maybe, if your favorite drink is kook-aide!

Yeah, that would be like a parody piece attacking Jamie for supporting an anti-property rights activist over a conservative Republican for the Chesterfield Board of Supervisors……oh wait, that actually happened…

You mean the “conservative” Republican that ran as a DEMOCRAT four year prior against our sitting Republican Supervisor and so half the entire Chesterfield Republican Cmte refused to support his charade four year later…oh wait, that IS what actually happened…

Actually, he had run as an independent, was subsequently elected to the Chesterfield County GOP Committee, and subsequent to that was duly nominated by the party in a contested nomination canvass. He ran on a platform of reducing county spending by $50 million.

So we agree that Tubbs ran against the Republican Board of Supervisors incumbent. As a result, half the entire Chesterfield Republican Cmte refused to support his candidacy, which is why he did so poorly in the general election. Durfee won over 40% of the vote in a 4-way race that is in a highly Republican district because Republicans couldn’t stand their duplicitous Republican nominee. His election into the CCRC was contested and extremely controversial. I was there and witnessed the fight. People were outraged.

But hey, no biggie if you don’t support the Republican nominee – just ask Eric Cantor. I’d tell you to ask Matt Geary, but sadly he is no longer with us.

This non-response is quite amusing.

If Republicans cannot agree on what happened in Chesterfield County, how can they agree on Bengazi?

Seriously, when was the last post in any Blog, left or right, about jobs or the economy?

Cute response, but this is not about Mark Tubbs; it is about you, Jamie. You are the one who ran Marleen Durfee’s anti-propert rights campaign against the conservative Republican nominee.

Tyler is telling the truth. The CCRC supported Mark. I was there as well, working with the campaign. Mark lost because he didn’t knock on every door in the district. No other reason.
BTW….HEY Tyler! I miss you all. (By now, Tyler will know who I am)

What is this even for? What is Chris Peace running for and who is running against him? Are they just sending out hit pieces now just for the hell of it?

Jamie’s post is a parody meant to poke fun at the mailers being used by Rep. Cantor’s campaign to attach his primary opponent, Dave Brat. Cantor is not actually attacking Chris Peace.

LOL its sad that I bit on that hook, line, and sinker. What does that say about Young Guns?

You’re not alone. Many of us bit.

Young Guns are democrats in drag pretending to help Republicans. They are Eric Cantors elite republican guard, kind of like neocons in drag.

“Neocons in drag”, I love that!

Thanks, Steve, for the lucid explanation. Until I read your post, I was scratching my head.

You know, you REALLY know how to ruin someone’s fun! Geesh…

Back in 2004 during a hot contest for LG nomination Bill Bolling’s campaign labeled Shaun Connaughton as a ‘Liberal’ who raised taxes. As you can see little has changed.

Why is Eric doing this? Did Peace cross Eric? Does Peace have a primary opponent? What’s going on here?

Shocked. . .I hope you were being sarcastic. . . Look at the stuff Cantor has put out about David Brat. Which earned the pants on fire rating. ..

Oh yea, one ad mentions Gov. Kaine tried to raise taxes $2B, and tries to tie Brat to it.

What the ad fails to mention is that Republicans Gov. McDonnell, House Speaker “HB 2313” Howell, and Sen. “Safari Hunter” Tommy Norment, tag teamed the Virginia tax payers for a not a $2B increase, but a $6B tax increase. The LARGEST in Virginia history. This years 96B budget is where they start to spend it! Don’t kid yourself, Virginia’s economy is propped up by Fed and State spending.

To get the Dems to go along with the HB 2313 caper? The Republican’s agreed to give up control of the State Senate…..Yea they did!

I can’t tell everything I want, a few names are off limits, I use them, I get the boot.

We are judged by those with whom we keep company. In fact, just a week or two ago, Eric Cantor was being judged for going to a resort with liberal interests. A little consistency is in order. And perhaps some facts for those who aren’t “in the know” in regarding Christ Peace.

Reply
I’ll Stop Writing About Eric Cantor When He Stops Doing Stuff Like This | Sara for America May 9, 2014 at 11:15 am

[…] Eric Cantor is a lot like my dog, lately.Â  Panting, urgently, leaving his ownership mark.Â Â  Cantor most recently left his mark on this, this… this… THIS… […]

Eric Cantor and his comrades are BOLD, FRESH, pieces of Humanity. Power has ABSOLUTELY corrupted the Congressman.